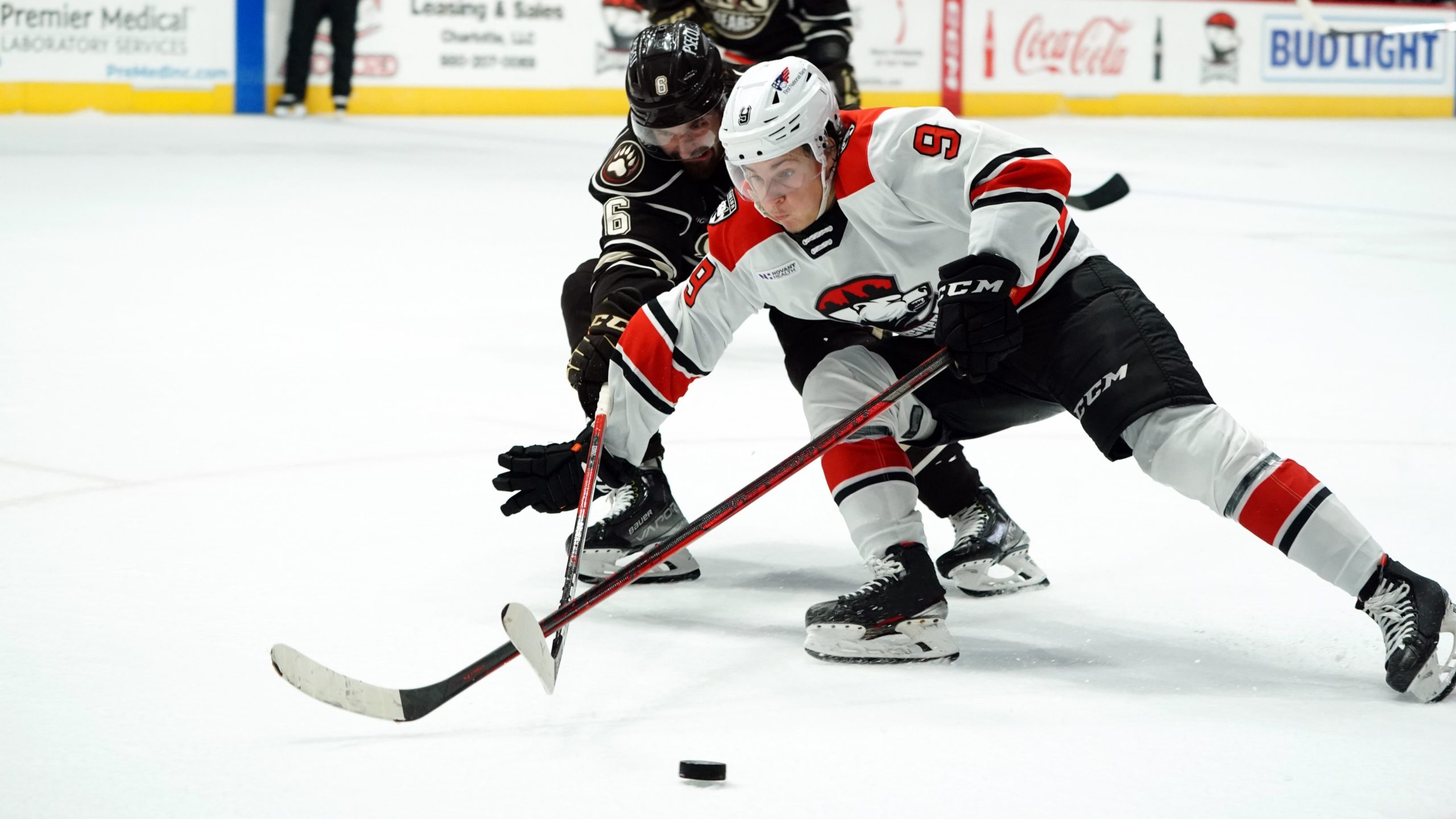 CHARLOTTE, N.C. – A hockey player’s journey can be different from the player next to them. Although it may begin the same by falling in love with the sport, all it takes is one game, player, or moment and someone will become hooked on this beautiful sport. Throughout this season and beyond, this series “The Check(ers) List,” will dive into how a Charlotte Checkers player got to where they are now with the team. All paths start somewhere, but at some point, these paths will lead to the team in Charlotte, North Carolina. The first player of this series will be Tampa, Fla. native Logan Hutsko.

Hutsko started his hockey journey at Shattuck St. Mary’s (SSM) in Faribault, Minnesota. SSM is well known for producing some really high-end hockey talent. Even in the 2012-13 season in Hutsko’s first season with the team, he was teammates with Clayton Keller and Ryan Lindgren. In his first year, Hutsko finished the season with 40 points (16 goals and 24 assists) in 61 games played. That placed him eighth on the team in scoring that year compared to Keller, who finished with 129 on the year. A solid first season at SSM for Hutsko, all things considered, for a 13-year-old. The following season, Hutsko would take a massive leap and set SSM scoring highs in points (109), goals (40), and assists (69) in 65 games played. A massive jump in development for Hutsko, going from 40 points in his first season with 16 goals to 109 points the next season and 40 goals.

In his final season with SSM, Hutsko would go on to finish the 2014/15 season with 90 points (22 goals and 68 assists) in 55 games played. It was not as high as the 13/14 season, but nonetheless, what a very solid last two seasons at SSM before moving on to the United States National Team Development Program. He would spend the next two years playing in the United States Hockey League (USHL) and the U.S. National U17/U18 teams. After that, Hutsko would move on to play college hockey in the NCAA. 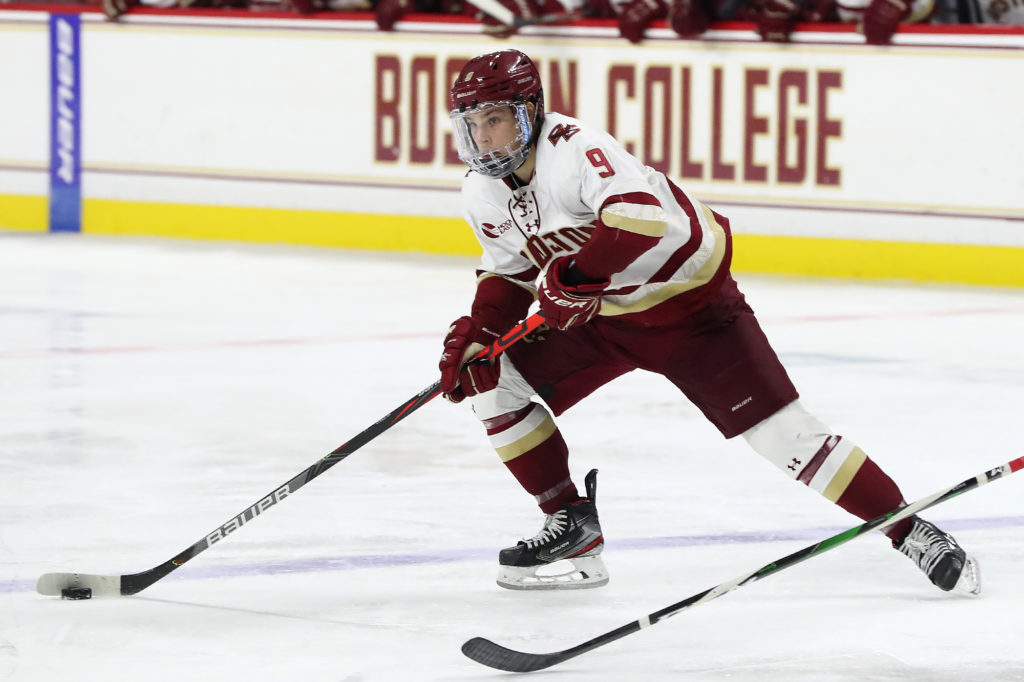 Hutsko would start his freshman year at Boston College in the 2017-18 season. He had a spectacular year in year one with the program. He finished the season with 31 points in 37 games played. He tallied 12 goals and 19 assists on the year. What makes that more impressive is that he led the team in scoring with 31 points and had 24 points in 24 Hockey East games. He also was one of seven players to skate in all 37 games that season. To top it all off, he became the eighth Boston College player to win Hockey East Rookie of the Year honors.

His second season with the Eagles wouldn’t be considered a slump, as he notched 26 points in 36 games played. He led the team that season in assists with 20 and was second on the team overall in points. He did manage to have two decently long points streaks that season. The first one was from November 2nd to the 30th, where he had three goals and eight assists for 11 points in seven games total. The second one came at the end of the season, where in four games, he tallied two goals and five assists for seven points. He managed to end the season on a high note despite the small dip in goals.

Just like his time at SSM, Logan Hutsko had a jump in production. In his junior year with the Eagles, he would finish the season with 33 points in 30 games played. He had 19 goals and 14 assists that season. His 19 goals would put him seventh in the nation with goals that year. He also posted a career-high points streak that lasted 12 games as well. Unfortunately for Hutsko, his senior season started off hot but then ended not so well.

In his senior year, Hutsko was named assistant captain and also had 11 points (four goals and seven assists) in the first 11 games played. Although, he would go on to miss the final two months due to injury. While that was not how he wanted to finish his college career, in March of 2021, Hutsko would make a deal that would further his hockey career. He would do so with the team that drafted him back in the 2018 NHL Entry Draft. 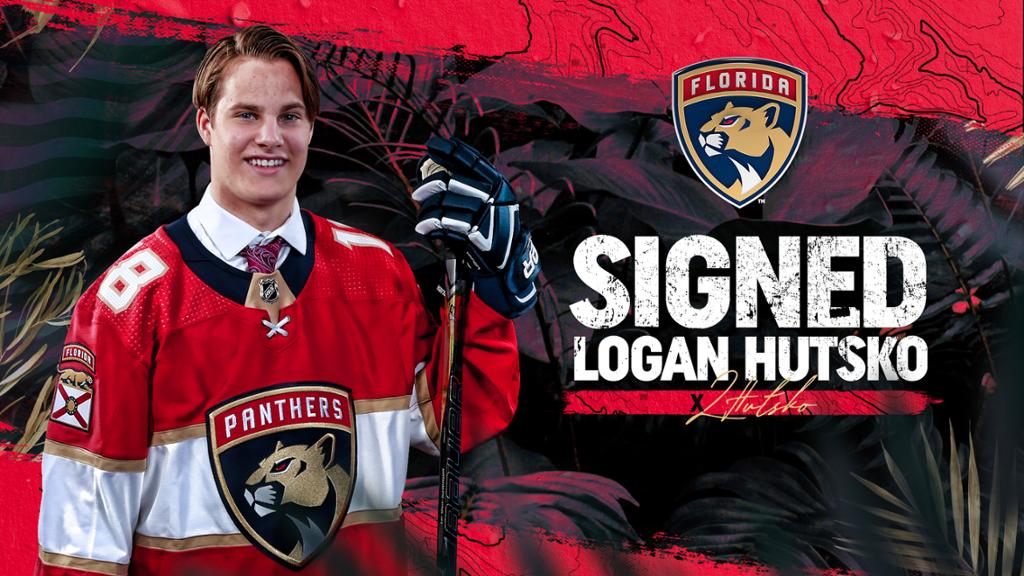 In March of 2021, Hutsko would sign his entry-level contract with the Florida Panthers. Per CapFriendly, it was a 2-year, $1.85M deal that would be $867.5K per year. That will carry over until the end of the current season of 2022-23. Hutsko is a restricted free agent (RFA) after this season.

He is currently in his second professional season with the Charlotte Checkers. He played his first full year last season in Charlotte. In 71 games played, Hutsko tallied 38 points, with 10 of them being goals and 28 assists. H finished fifth on the team in scoring that year. Also, he ended up finishing eighth in goals along with second in assists. In his second season with the Checkers, as of this writing, he is currently at 11 points in 18 games played. So far, he has notched six goals and five assists. That would currently place him fifth on the team in points.

Overall, Hutsko does have a solid game that could potentially place him in the Panthers’ Top 9 at some point soon. He is a consistent player who knows how to score and make plays for teammates. If he can manage to stay healthy, he can really make a name for himself in the Florida Panthers organization. He is well-liked by teammates and fans in Charlotte and he could make an impact in Sunrise when given his chance.