The Grizz and I: A Journey from Colorado to Utah

The Grizz and I: A Journey from Colorado to Utah

When I was seven years old, my father took me to what would be the last Colorado College hockey game at the original Broadmoor World Arena in Colorado Springs, Colorado. After that 3-2 overtime loss against Michigan Tech in the first round of the WCHA playoffs, the CC Tigers left the 56-year-old venue in March 1994 and it was demolished shortly after.

As an impressionable young kid, I was doubly devastated in having my favorite hockey team lose early on in the postseason and hearing their arena was being torn down. It would be the last hockey game I’d watch in Colorado for over 25 years, with my dad moving us to the Salt Lake City suburb of Sandy, Utah in the summer of ‘94. 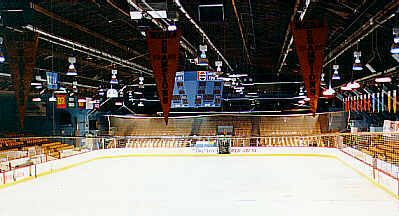 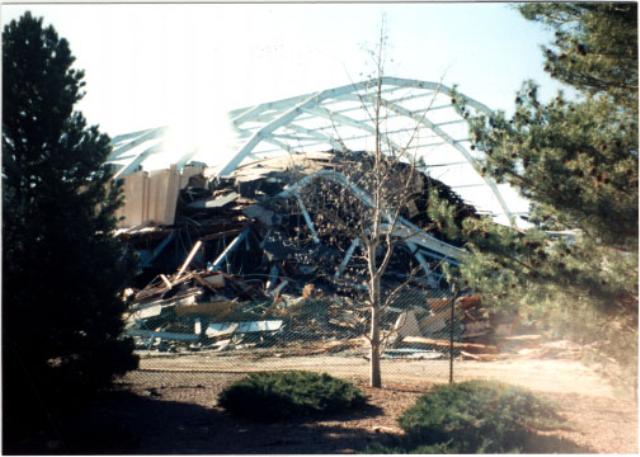 …and during its demolition. (Photo Credit: Radio Colorado College)

A HOCKEY BACKGROUND BETWEEN THREE STATES

I have lived in Colorado, Idaho, and Utah for the majority of my life on this planet. The latter is where I was born back in 1987 when my father was attending Salt Lake Golden Eagles games (more on this later). My family then bounced back and forth between states (as previously mentioned) before ending up in Utah again in 1994. Oddly enough, as my family moved from Colorado to Utah, a pro hockey team was looking to do the same shortly after.

As chronicled in a previous article, the Grizzlies played one season in Colorado before the NHL’s Quebec Nordiques were purchased and moved to Denver in 1995. The newly named Colorado Avalanche needed a home in McNichols Sports Arena — where the Grizzlies played — and essentially pushed the IHL team out of the Denver market. The Grizzlies then moved to Salt Lake City for the 1995-96 season.

And, I was there to witness that first Utah Grizzlies home game.

I have been wanting to write an article chronicling how my love of professional hockey began in The Beehive State when I was just eight years old. However, timing is everything when it comes to journalism, and it never lined up when it came to sitting down and writing it out. Finally typing out these words, however, reminded me just how much my dad and I both began loving pro hockey in Salt Lake City (albeit at different times).

My father fell in love with the game while living in Salt Lake in the mid-1980s, becoming a fan of the Golden Eagles and short-statured centerman Doug Palazzari (who so happened to play his university years at…Colorado College). It makes sense that he carried this love of hockey over to Colorado Springs and the Tigers, and eventually, getting his only son in on the action, as well.

Let’s rewind for a brief history. The Golden Eagles played between three leagues from 1969 to 1994, mainly skating at The Salt Palace Acord Arena for 22 of those 25 years along the Wasatch Range. After local businessman Larry H. Miller put up private financing to get a new arena built in 1990-91, Salt Lake played their final three seasons at the Delta Center before the franchise was sold to a Michigan-based ownership group and relocated to Detroit in 1994. After a year without pro hockey, the Grizzlies moved over one state to fill the void left by the Golden Eagles.

Thus, the door opened for the Delta Center to once again receive a pro hockey tenant, this time in the form of the rechristened UTAH Grizzlies. The club opened the season on the road against Phoenix on Friday, September 29, 1995, taking the Roadrunners to a shootout and earning a 6-5 victory (this was ten years before the NHL abolished the tie and instituted shootouts itself). The Grizzlies’ home opener was one week later on October 6, hosting the Peoria Rivermen at the aforementioned Delta Center. 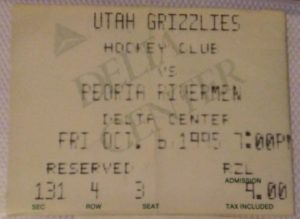 My ticket stub from the first Utah Grizzlies game. $9.00 for AAA minor league hockey in 1995? Can’t beat that price!

It was an odd feeling, walking up to such a massive arena for a hockey game. As previously mentioned, I was used to catching Colorado College on their home ice at the initial iteration of the World Arena. The intimate seating of an NCAA facility that only sat 3,000 fans paled in comparison to the then four-year-old Delta Center that sat 18,000 plus for both basketball and hockey [Looking back, the arena only hosted the Grizzlies for three seasons before Utah moved into the Maverik Center (formerly the E Center) ahead of the 1997-98 regular season].

I’ll be honest, I don’t remember much of the game itself. The opening video package with the Grizzlies skating with the Turner Cup is all that sticks out from the 25-year-old memory of the match-up. I recalled Utah winning, but that was about the extent of it. I had to do some research to find out the final result, a 4-2 victory for the Grizzlies. What a way to instill the love of the pro game into a young kid’s heart! 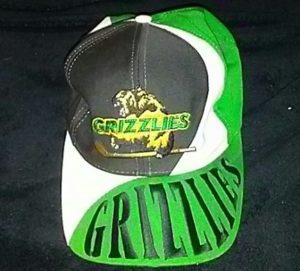 The hat my father bought when we went to the first Utah Grizzlies home game in October 1995. A very appropriately styled hat for the time period.

My family moved back to Colorado in 1996, right when the Avalanche were in the midst of their Stanley Cup Playoffs push. The Grizzlies became an afterthought for me as I sat in front of the television, watching Uwe Krupp blast a shot from the blue line and clinch an NHL championship for the Avalanche in Game Five of the 1996 Stanley Cup Finals. We moved to Idaho in 2000, and the WCHL’s Idaho Steelheads then became the closest in-person game to watch. With a favorite pro team in the Avs and local team in the Steelies, it was easy for me to not keep tabs on the Grizz until they joined the ECHL (another foreshadowing alert).

Fast forward to November 2017. My love for hockey translated into a writing position, covering Idaho for The Sin Bin as a credentialed correspondent. In my two seasons covering the Steelheads, I witnessed Idaho face off against the Utah Grizzlies ten times in the regular season and once in the preseason. The Grizzlies and Steelheads (bears and fish, get it? Natural rivals!) have been foes since Utah joined the ECHL in 2005. The fervor between the two clubs is most obviously palpable with 15 years of bad blood (and especially with former rivals Alaska and Colorado no longer residing in the ECHL’s Mountain Division).  They have to be the best of enemies; they’re all that’s left in the Mountain Time Zone in the ECHL (save for Rapid City, but they joined the league in 2014, still early in developing rivalries).

Time has a funny way of bringing you back to the beginning, and now residing back in Colorado (with the Avalanche & Eagles both close by and the Grizzlies the ECHL team of that affiliation), the symmetry is definitely not lost on this sports writer. In fact, it’s only fitting that I came over to cover the AHL’s Colorado Eagles after I moved to Denver in 2019. Plus, during the 2019-20 season, Utah celebrated 50 years of minor league hockey between the Golden Eagles and Grizzlies combined. My dad (who passed away in December 2015) would have been proud of it all, no doubt.

Now, as Utah celebrates 25 years between the IHL, AHL, and ECHL in 2020-21, I find myself once again connected with the market that got me into professional hockey in the first place. Even with all the uncertainty of the ECHL season due to the global COVID-19 pandemic, I can still find some solace in the connections (and re-connections) I’ve made between Colorado, Utah, and the sport of ice hockey.

It’s all we can do in these times: focus on the positive, take it one day at a time, and look for the connections that bring you back to the start of the things that you love.