The Stars Don’t Align, Fall to Eagles in Shootout

The Stars Don’t Align, Fall to Eagles in Shootout

CEDAR PARK, Texas – The Stars returned to the H-E-B center after a 4-game road trip to square off with the visiting Colorado Eagles. This was the third meeting between these teams thus far, and there was certainly no love lost on either side.
The Stars were a little slow coming out of the gate, failing to register a shot on goal in the first four minutes. However, the slow start was not indicative of what was to come, as the Stars implemented their aggressive forecheck and threw everything at the net. At 15:21 of the first, it was Anthony Louis netting his first goal of the season on an absolutely beautiful snipe over the glove of Colorado goaltender Justus Annunen. After the Louis goal, the Stars continued to press for the backbreaker. Despite having multiple power-play opportunities, the Stars were unable to capitalize. Or, they did, but it did not count. Fredrik Karlstrom believed he scored a goal, but a premature whistle negated his tally.
As regulation dwindled, the Stars were giving up very little defensively. It was a bizarre, batted puck that leveled the scoring in the third period. A wild rebound fluttered high in the air, with only one player able to see where it went. At 10:06 of the third period, it was Andreas Wingerli with a bunted in the equalizer. The Stars took that personally and were hunting for the lead during the final minutes. Even with a power-play opportunity, the Stars could not reclaim the lead, and we went to overtime. 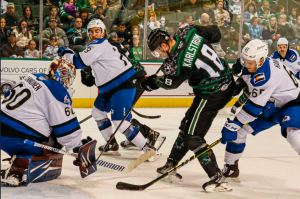 In overtime, Colorado was guilty of tripping Karlstrom on a breakaway. As a result, Karlstrom was awarded a penalty shot; however, his attempt was stymied, and 3-on-3 play continued. The Stars came firing back with a flurry of shots. Thomas Harley had two prime scoring chances from the low slot as the defense collapsed on the crease, and Anthony Louis continued to be seen with his excellent passing and puck-handling abilities. Despite their best efforts, they were still unable to get anything past Annunen. With a scoreless overtime period, we headed to a shootout. Jordan Kawaguchi and Riley Damiani were unsuccessful on their attempts. On the contrary, Mikhail Maltsev and Dylan Sikura beat Jake Oettinger via some fancy dekes and a rocket wrister over the blocker.
Final Thoughts
The Stars proved again that they could play their kind of game against anyone, but the inability to capitalize on the opposition’s mistakes is becoming an issue. Falling to 4-6-0-1 is not ideal, but it is still early in the season. If the power play can start seeing some consistency and the physical play in the offensive zone can result in more high-quality chances, I think the wins will come in droves.
The Stars will face the Eagles again on Saturday, November 13th at 7 p.m. at the H-E-B Center, where they will look to get another series split at home.