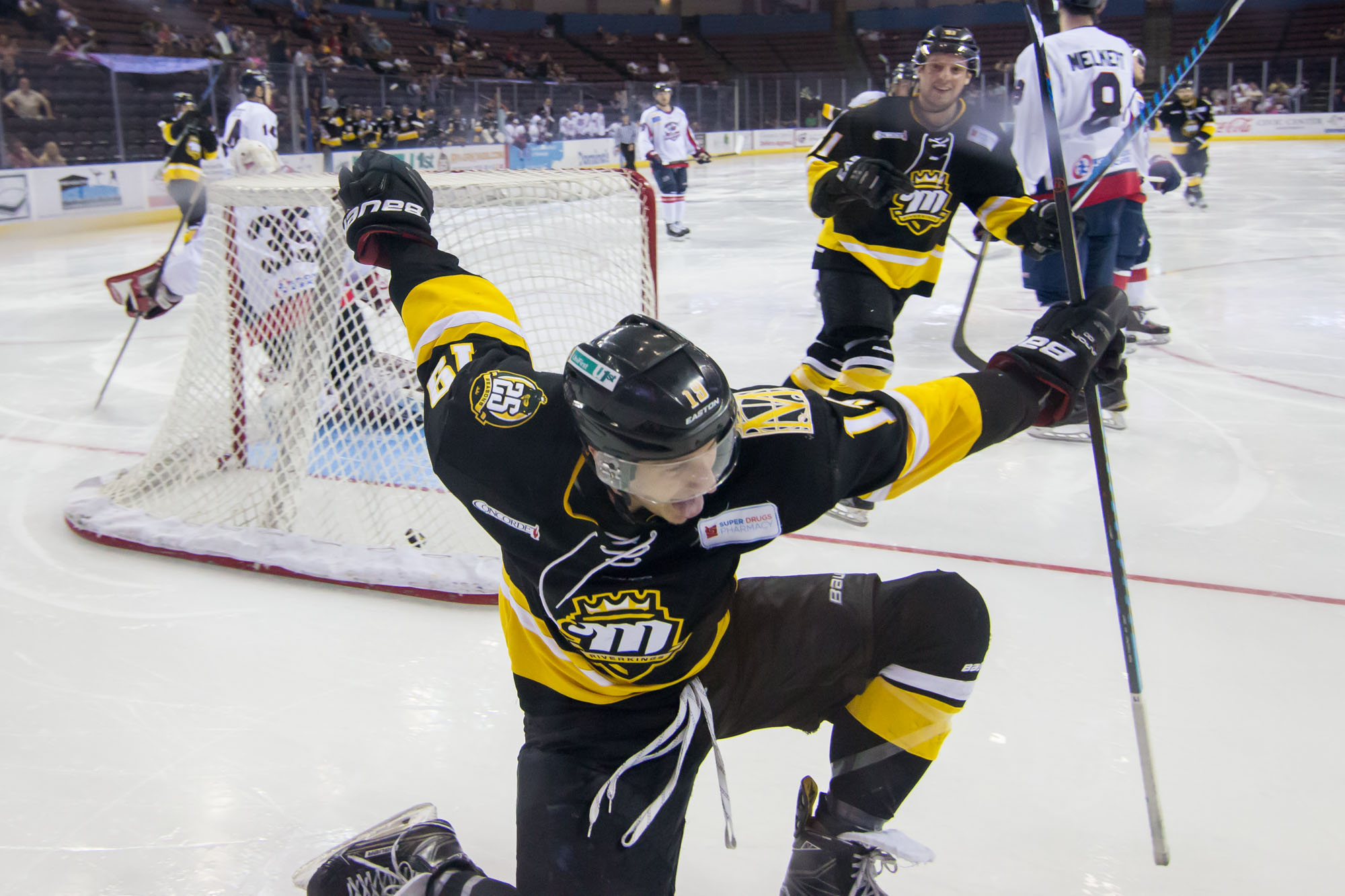 This Is Not How Things Should Be

This Is Not How Things Should Be

SOUTHAVEN, Miss. – I keep thinking it’s not supposed to be this way.
Really, I’ve been saying that since May 2018 when the RiverKings announced they were “suspending operations”, but lately I’ve been saying it more frequently. I had a plan and goals and knew what I wanted to do, but suddenly it was gone and I couldn’t. Everything since then has been… weird. Especially this season and the way it ended.
The suspension and subsequent cancellation of the 2019-20 season has repeatedly and painfully reminded me of what I went through losing my SPHL team. Watching fans hold on to hope only to be let down, hearing the disbelief of players, rumors spreading, and when the pain gave way to anger…I felt it all again like it had never left.
This season for me was both incredible and a bit of a let down. Incredible because as newly named Photography Editor, I was able to bring new photographers on board, establish a set of standards for our photos, and do some photography training to bring some of my new photographers up to those standards. It was a lot of work, an incredible amount of fun, and extremely rewarding. I was also only able to go to one hockey game all season. As you can probably imagine, that was disappointing.
The one game I was able to attend was a great experience. The Evansville Thunderbolts hosted the Birmingham Bulls for their home opener on October 19. The ‘Bolts fell to the Bulls that night, but I was able to see my friend and former RiverKing Derek Sutliffe take the ceremonial puck drop as alternate captain. 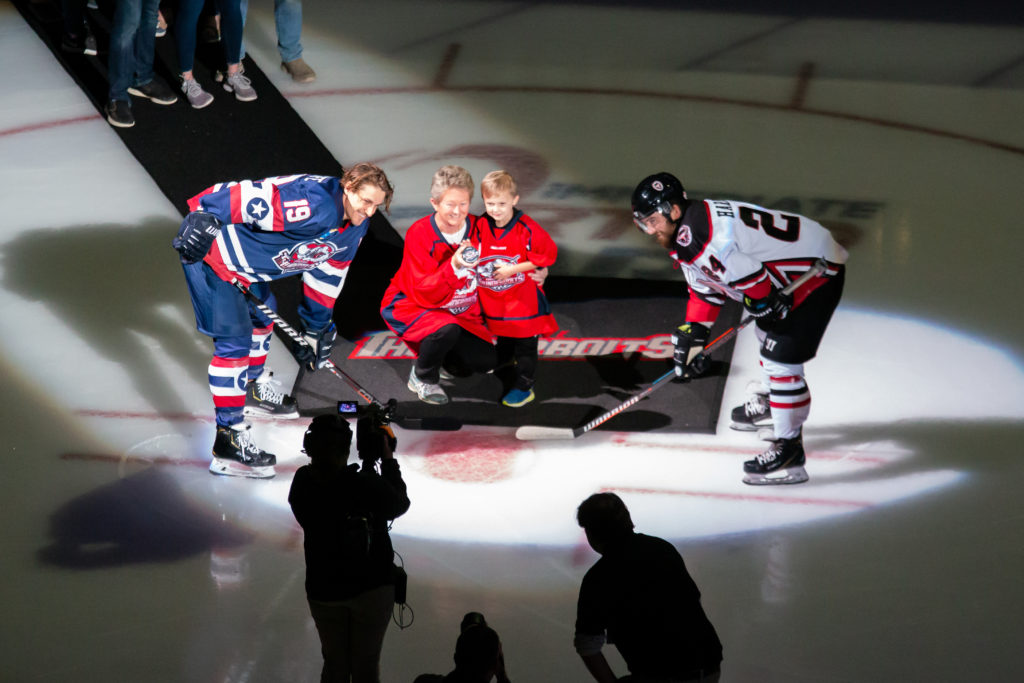 I’ve known Sutliffe since his first pro game in March 2017. As RiverKings team photographer, I took his first pro headshot, first shift on the ice, first time warming up as a RiverKing — everything. When he scored his first pro goal a couple of weeks later, I was right there. The celly shot remains one of my favorite photos I’ve ever captured. 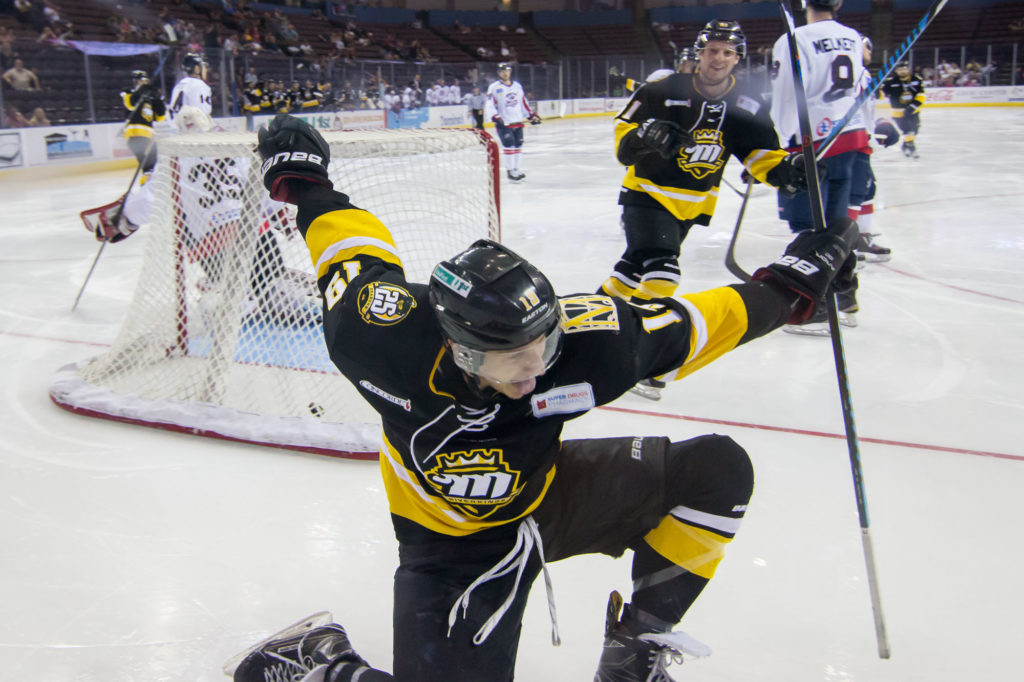 He scored twice that game against the Thunderbolts and was rewarded first star. Two and a half years later, he was just as fun to watch, and I knew the “A” was well deserved. Another first for him that night: his first home game wearing a letter. 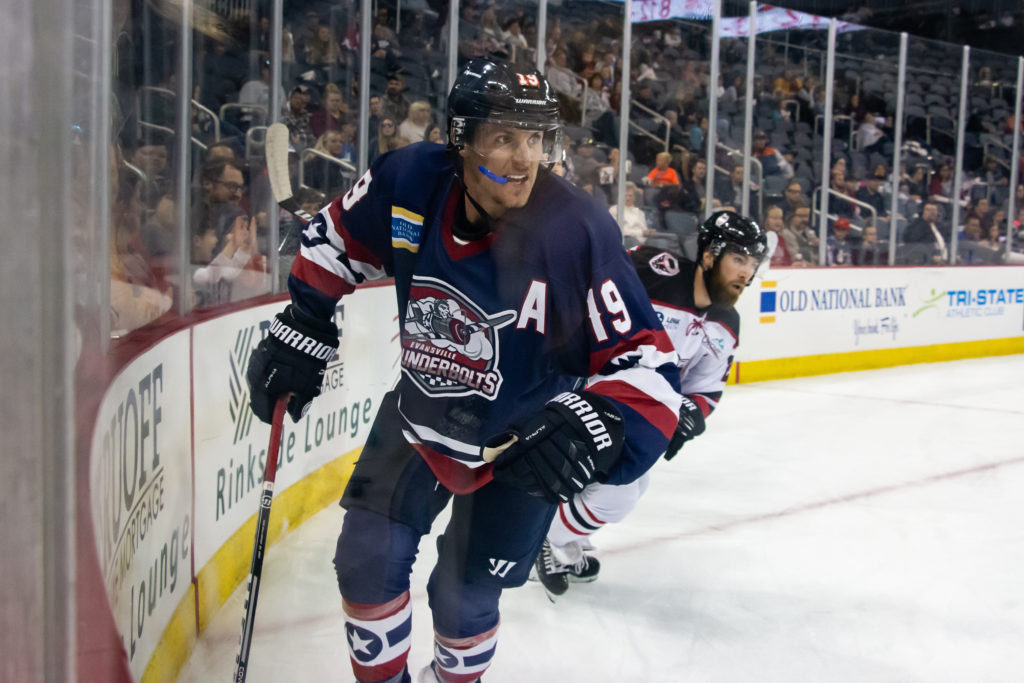 Derek Sutliffe scrambles to get the puck during the Thunderbolts home opener. Photo Credit: Kori LaVire / The Sin Bin

When the 2019-2020 season came to it’s abrupt end, I reached out to Sutliffe to see how he was doing. I had been there for most of his other “firsts”, why not add “First Season Cancellation Due to Global Pandemic”?
He told me he and his teammates had remained hopeful during the suspension, much like fans and team staff alike, and despite uncertainty.

“Once it was officially cancelled, there was a mood of disbelief. Many guys were hoping that it would resume back up again. But it was hard to put things into perspective that we were completely done. Usually you prepare yourself for the end of the season and then continue into playoffs, so mentally you know that it’s ‘do or die’ and you understand the extent of what is at stake. With the season ending so abruptly, it hit us with shock. No one could prepare for it to be all done just like that.”

He went on to address how difficult it must have been for fans, too.

“ being excited for playoffs and postgame skates, or a team get together at the end of the season to mingle and send the players on their way home. But unfortunately, this season didn’t have that, either.”

I’ve followed the Thunderbolts closely this year, after their 2018-19 season and all the changes made from the top down in the organization. I wasn’t at all surprised to see how well they were doing. It was exciting to see them battling it out in the standings, and I was frustrated to see it abruptly end.
Sutliffe agreed with my sentiment.

“Although it’s extremely disappointing to end the season so short, we truly believed that we would have had an incredible run in playoffs. but I completely understand the severity of this global situation. We appreciate all of the fans support this season; nothing would exist without them. This will only mean we will have a longer offseason to train and get ready for the upcoming season.”

That is a silver lining to be found: fans can look forward to their teams coming back in October. Extra off-ice training time, combined with a need to prove what might have been had COVID-19 not changed the way we live, will make for exciting hockey this fall.
A player who won’t be back to see that, however, is Fayetteville’s alternate captain Travis Jeke. I had a chance last season to get to know Jeke both at home in Fayetteville and on the road with the Marksmen in Pensacola. He was always quiet, confident, and polite. 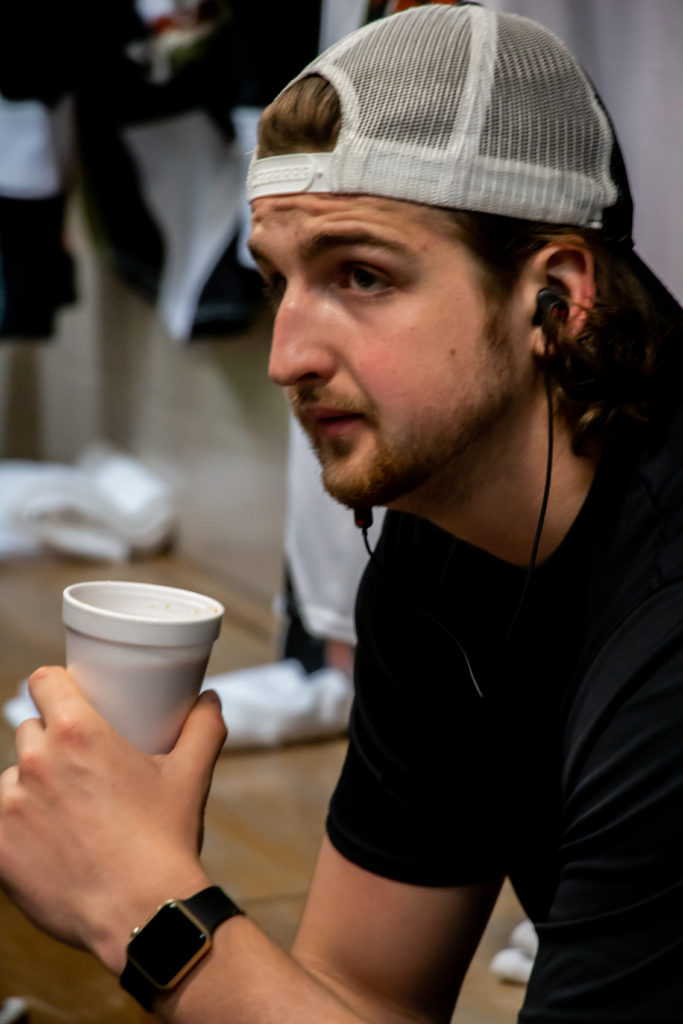 I was unable to make it to Fayetteville this season or catch the Marksmen on the road, but everything I’ve seen and read made it clear that Jeke hasn’t changed since I last photographed him. When I saw the announcement of his retirement just five days after the cancellation of the SPHL season, I had to take a moment and wonder if he had gone into this year knowing it’d be his last, and if the premature end had affected that decision.

“I had a really good idea that it would be my last season. It was furthered with some family things that arose during the year. Part of me second guessed it 100%, but I had to look at the bigger picture in my life.”

I had enjoyed watching his team grow and change as they climbed higher in the standings and battled for first place. The cancellation of the season left everything just…hanging there. So much build up, and then it was time to go home without the Marksmen playing the Rivermen even once. With both teams frozen at 71 points, there was no way to determine who was number one, or if their hard work had paid off.
Jeke recalled going into that weekend ready.

“We were beyond excited to play Peoria. It was the only team we had yet to play, and obviously first place was on the line. We were prepared and ready to give everything we had to see how we stacked up against another great team. We were obviously very bummed and shocked and frustrated by the whole thing at first, but after a few days it made sense given what everyone in the world was going through. We had to step back and realize there is a lot more on this earth than hockey.
“I can speak for the boys when I say we were heartbroken. We were such a close team and really thought we were going to win a championship for Fayetteville. It was shocking, of course. The day of the suspension, we were preparing to play the biggest weekend of the year, and it was taken away in the blink of an eye.” 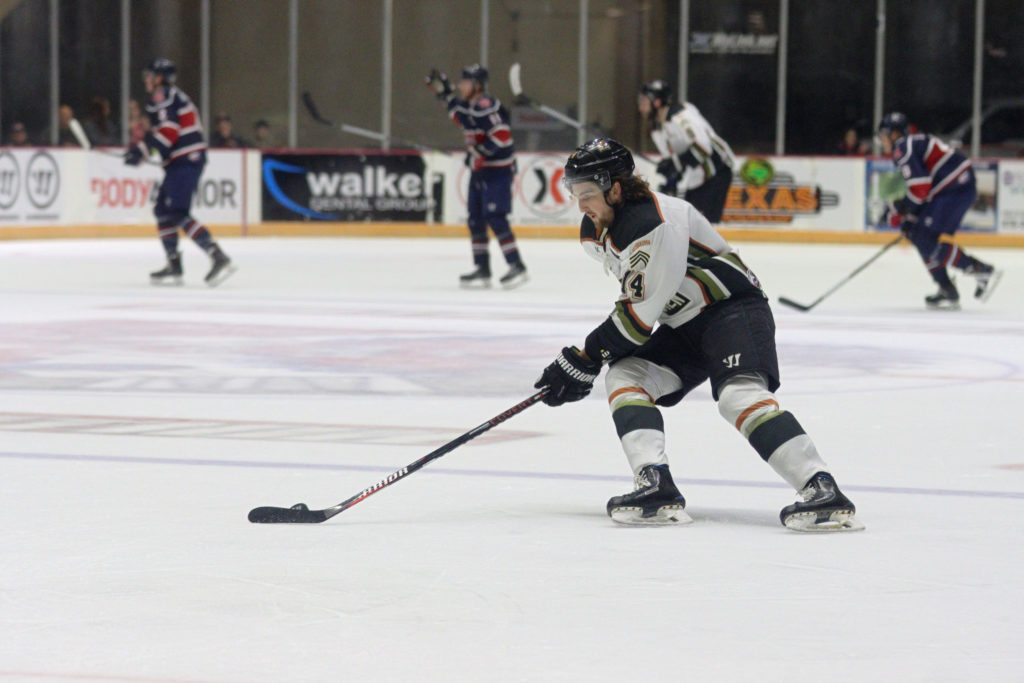 Travis Jeke of the Fayetteville Marksmen corrals a puck against the Macon Mayhem at the Macon Coliseum. Photo Credit: Bryan Meeks / The Sin Bin

Fayetteville was ready when Peoria had arrived in town for their three games. Riverman forward Cody Dion shared with me the mindset of the team going in, and the reaction to never seeing it happen.

“With the way the season was playing out down to the wire, it’s unfortunate there wasn’t a clear leader. The fact we got down to Fayetteville Thursday to play a three-in-three would have made an impact on the standings. With how close the teams were this year and our playoffs being shorter than other leagues, in reality any team has a chance to win in the playoffs.
“I personally am not concerned about who got first in the regular season. It’s an honor to have that title, but it’s all about the President’s Cup for every player. Not knowing how the season was going to end was a nerve-racking time for everyone. In our minds, we still had at least a month left with our teammates, whom you consider family after spending so much time with them all season. Some players might not play again and didn’t have proper time to soak in the last remaining time with their brothers.” 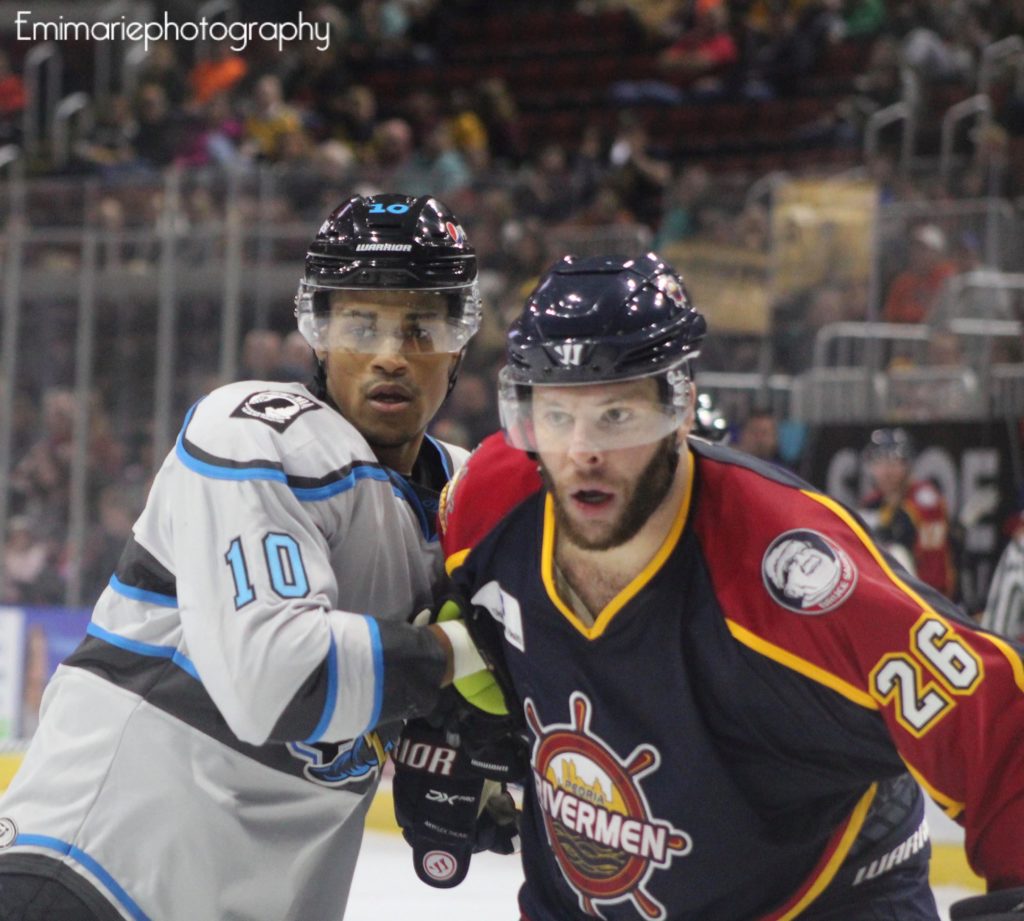 The way things ended was difficult and hard to process for everyone. But, to have battled all year to be in that position just to go home without seeing it through is unfathomable. Hockey players don’t quit. They play through injury, illness, and whatever they have going on in their personal lives. They give 110% all of the time. They do it for themselves, their team, and the fans. I know if it had been an option, they would have fought all the way through — not just for themselves, but for their fans. It’s not supposed to be this way, but it’s the way it is. I hope we go into next season grateful for the game we love and the guys who play it.
Dion summed it up nicely.

“The way this season ended is unfortunate. No competitor has ever worked hard all year just to have the season ended so suddenly. I’d like to thank the league and every organization for all they have done for the players. The fans in this league are amazing. I hope they know how much the players appreciate them.”