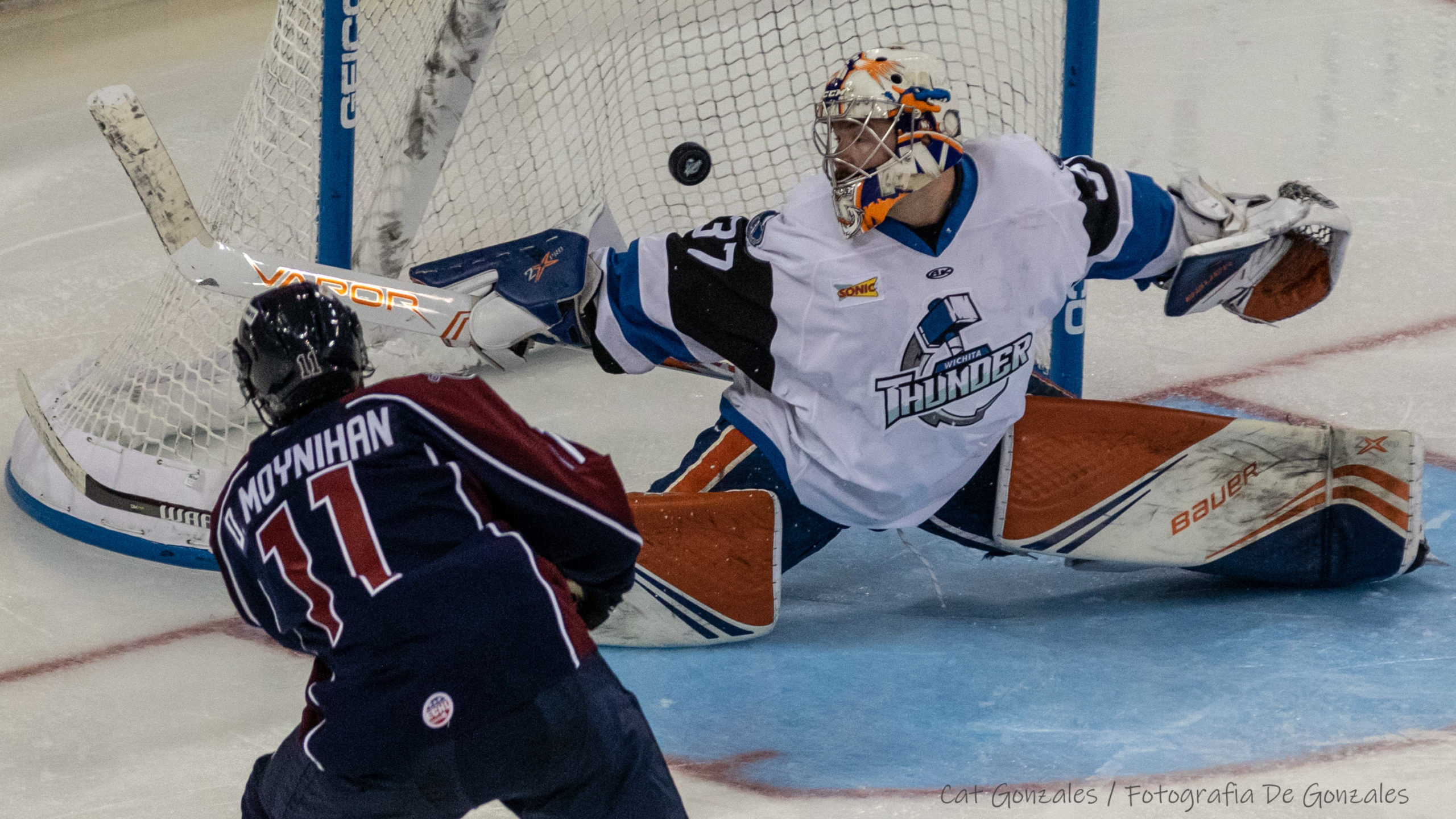 Momma always said there would be days like this. It was a night to forget for the Wichita Thunder as the Tulsa Oilers drained INTRUST Bank Arena’s energy in a 7-2 rout of Wichita.

WICHITA, Kan. – Momma always said there would be days like this. It was a night to forget for the Wichita Thunder as the Tulsa Oilers drained INTRUST Bank Arena’s energy in a 7-2 rout of Wichita.
Wichita started the game with decent energy, as they have in their last two home games. Despite the strong start physically, it was the Oilers who struck first, making Wichita pay for an unneeded penalty.
At 16:58 of the first period, Robby Jackson buried a feed from Adam Pleskach on a bang-bang pass to the slot.

The Oilers power play was solid throughout the first period, using a floating attacker near either side of the net to surprise the Wichita defense with quick flicks to the slot.
Tulsa rode the narrow lead to the first intermission, dominating nearly all facets of the game thus far. The Oilers outshot Wichita 18-5 in the period and won 15 of 29 faceoffs.
As they have in recent games, Wichita’s second period start was unsteady and slow. The Oilers caught the Thunder napping and Jackson found nylon for the second time in the game, skating unopposed into the crease and firing a shot over Mitch Gillam‘s shoulder.
Wichita finally gained some positive momentum when Danny Moynihan took a penalty for tripping, giving the Thunder their second power play of the period. 16 seconds later, Jared Thomas scored his first of the young season, a shorthanded goal into the top-left corner.

The score came off a nice assist by Charlie Sampair, who picked up a loose puck following a Wichita turnover.
The Thunder couldn’t keep the Oilers at bay for long, as yet again Tulsa made Wichita pay for a costly turnover. Brent Gates buried a one-timer from J.J. Piccinich past Gillam on a 3-on-1 play to extend the Oilers’ lead.

The Oilers would not only carry the 4-0 lead into the second intermission but also the momentum. Following two periods of play, Tulsa was outshooting the Thunder 38-13.
In a game that seemed over after two periods, the Thunder came out fast-paced to begin the third. Wichita was rewarded for the early effort as Beau Starrett scored his third of the season on a beautiful cross-crease feed by Patrik Parkkonen.

What did not go to plan was holding onto momentum following the goal. Just 91 seconds after scoring, Wichita conceded yet another goal, this time on a failed clearance. Former Thunder forward Ryan Tesink took a slap-shot from the blue line that squeaked through Gillam’s legs to put the Oilers up 5-1.
At 7:25 of the third, just seconds after a Jake Clifford penalty expired, Luke Shiplo scored his first professional goal on a hard shot from the top of the faceoff circle.

Yet again, Wichita could not hang on to any momentum from the goal. 1:44 after the Shiplo goal, Gates found the net for the second time of the evening, burying a rebound of a shot by Steven Kaunisto.
The Oilers concluded their offensive showcase at 10:49 of the third as Tesink joined the multi-goal ranks with an easy one-timer from the slot on a feed from Piccinich.

Three minutes later, Connor Moynihan and Spencer Dorowicz dropped the gloves in the final exciting action of the game.
Tulsa concluded the 7-2 win outshooting the Thunder 50-21. Wichita edged out Tulsa in faceoffs (40-36), hits (30-26) and blocked shots (10-4), none of which mattered in the end result.
Wichita finished the night 0-for-6 on the power play for the third time this season (all losses) while the penalty kill unit killed three of four Tulsa power plays.

“Obviously today is one we want to put in the garbage can,” Wichita Thunder Head Coach Bruce Ramsay said. “We were making a lot of mistakes and turnovers.”

The Thunder look to right the ship on Monday night in Kansas City as they play game three of 51 straight Mountain Division games.
Follow Matthew Will and Matthew Harding on Twitter during Wichita Thunder home games, plus all Thunder games live on The Sin Bin’s Mixlr page.