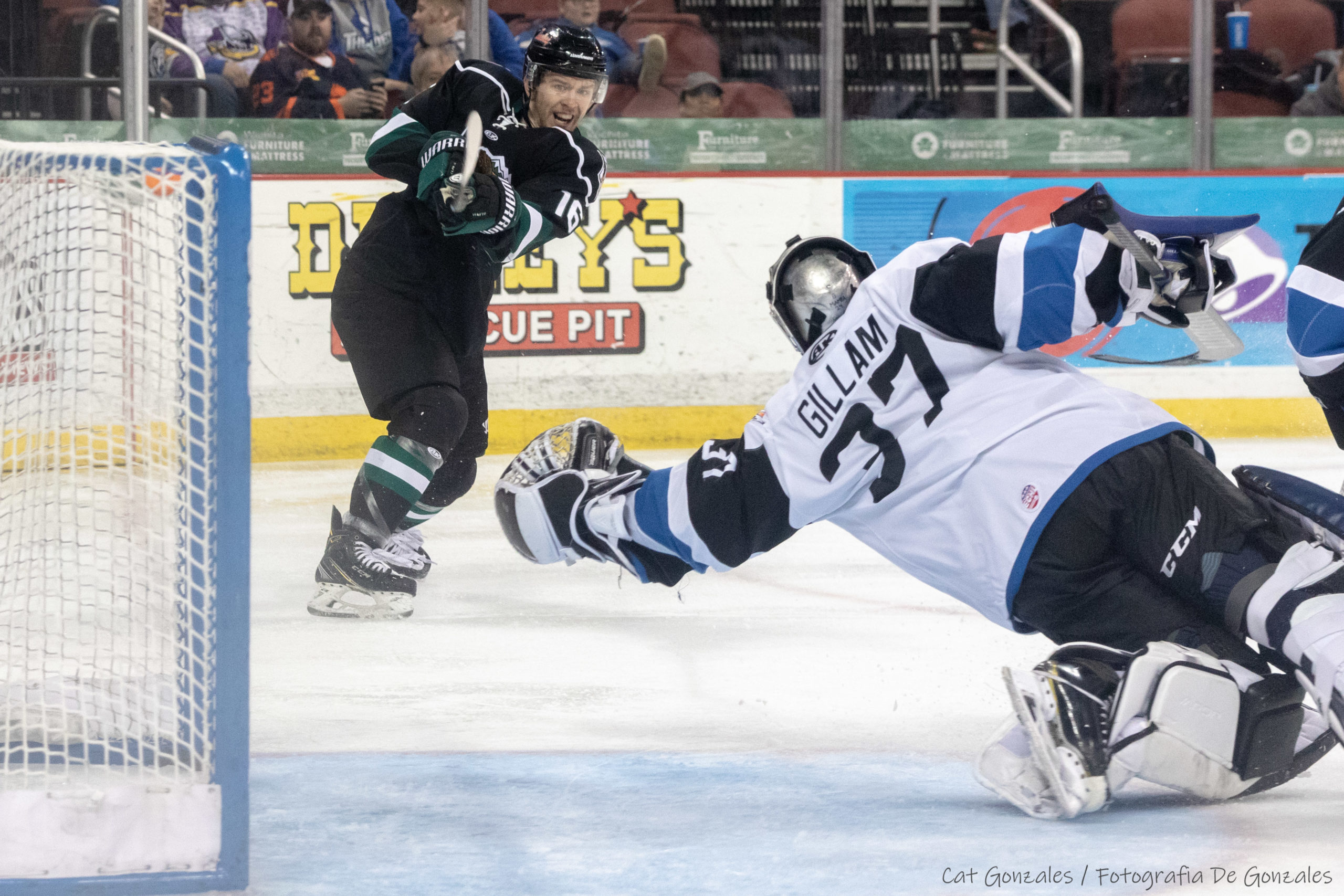 WICHITA, Kan. – Despite tying the game at 1-1 early in the second, Wichita was unable to keep up with the Utah Grizzlies, falling 3-1 on Wednesday night.

WICHITA, Kan. – Despite tying the game at 1-1 early in the second, Wichita was unable to keep up with the Utah Grizzlies, falling 3-1 on Wednesday night.
In one of the strongest defensive periods for Wichita all season, the Thunder had to practically start the game shorthanded as just 23 seconds into the opening frame, Jacob Graves visited the penalty box for a trip.
The penalty kill was one of the most complete of the season as Wichita allowed two shots while blocking four (three of which were by Fabrizio Ricci) and laying four hits.
Following the successful kill, play went on without a whistle for the next seven minutes. Less than a minute later, Utah found the net to open the scoring as Griffen Molino scored his 18th of the season. Connor Yau and Taylor Richart both recorded assists on the goal.
Play went on without many stops throughout the remainder of the first, Wichita’s defense holding the game together. After one period, Utah led 1-0. Even though they trailed, Wichita outshot (13-11), outhit (12-2) and blocked more shots (6-1) than the Grizzlies.
Much like the first period, Wichita went shorthanded in the opening five minutes of the second period after Chris Crane took a penalty for slashing. Wichita once again blocked more shots than they allowed, blocking two shots in a one-shot powerplay for Utah.
Just after the penalty expired, Sean Allen released a slap shot from near the blue line that beat Martin Ouellette glove side high.

Four minutes later, as a Wichita powerplay ended, Utah took a puck down the ice in a 2-on-1 rush. Following a cross-ice pass to Brandon Saigeon, Mitch Gillam bat a surely-scored puck out of the air to keep the game level.

Shortly after the save, Garrett Schmitz took a penalty for delay of game, a penalty that would come back to haunt Wichita.

“Seems like everytime we take [a delay of game penalty], we get scored on.” Head Coach Bruce Ramsay said.

With 11 seconds left on the powerplay, Utah got lucky as Gillam made an initial stop that bounced over his shoulder, giving Mitch Maxwell an open net to shoot at, giving Utah a 2-1 lead.

Wichita fought to keep the deficit at one into the second intermission, trailing Utah 2-1 after the second period. The Grizzlies outshot Wichita 11-5 in the second, taking a 22-18 shot lead in the game.
The third period went by quick for both sides, neither team having any real quality chances until the game hit its final minutes.
With just two and a half minutes remaining, Wichita had its last goal-scoring opportunity fall through their fingers as Ricci was unable to find a cross-ice pass from Shaquille Merasty.

Utah found the open net after Patrik Parkkonen attempted to make a save, sealing the game at 3-1.

“I want to give our guys credit, we battled against a very good hockey club…” Ramsay said. “We kept ourselves in the game throughout the whole 60 minutes.”

The Grizzlies outshot Wichita 31-28 with six of Utah’s shots coming on their four powerplay chances.
Wichita outhit Utah 27-9, blocked more shots (9-4) and won 30 of the 53 faceoffs in the loss.
Wichita went 0-for-2 on the man advantage and killed three of the four penalty kills they faced.
With the win, Ouellette advances to 17-7-1-1 on the year while the loss dropped Gillam to 12-16-4-0.
The loss drops Wichita to 19-23-8-0 this season, keeping them in sixth place in the division.
Wichita continues their quest for a 2020 Kelly Cup Playoff spot on Friday night when the team travels to Independence for a Mountain division matchup with Kansas City.

“We need to stay focused and keep on the process and we’ll be ready for friday night.” Ramsay said.

The Sin Bin pregame show with Matthew Harding will get started at 6:40p on Friday night on the Sin Bin app or at mixlr.com/the-sin-bin.