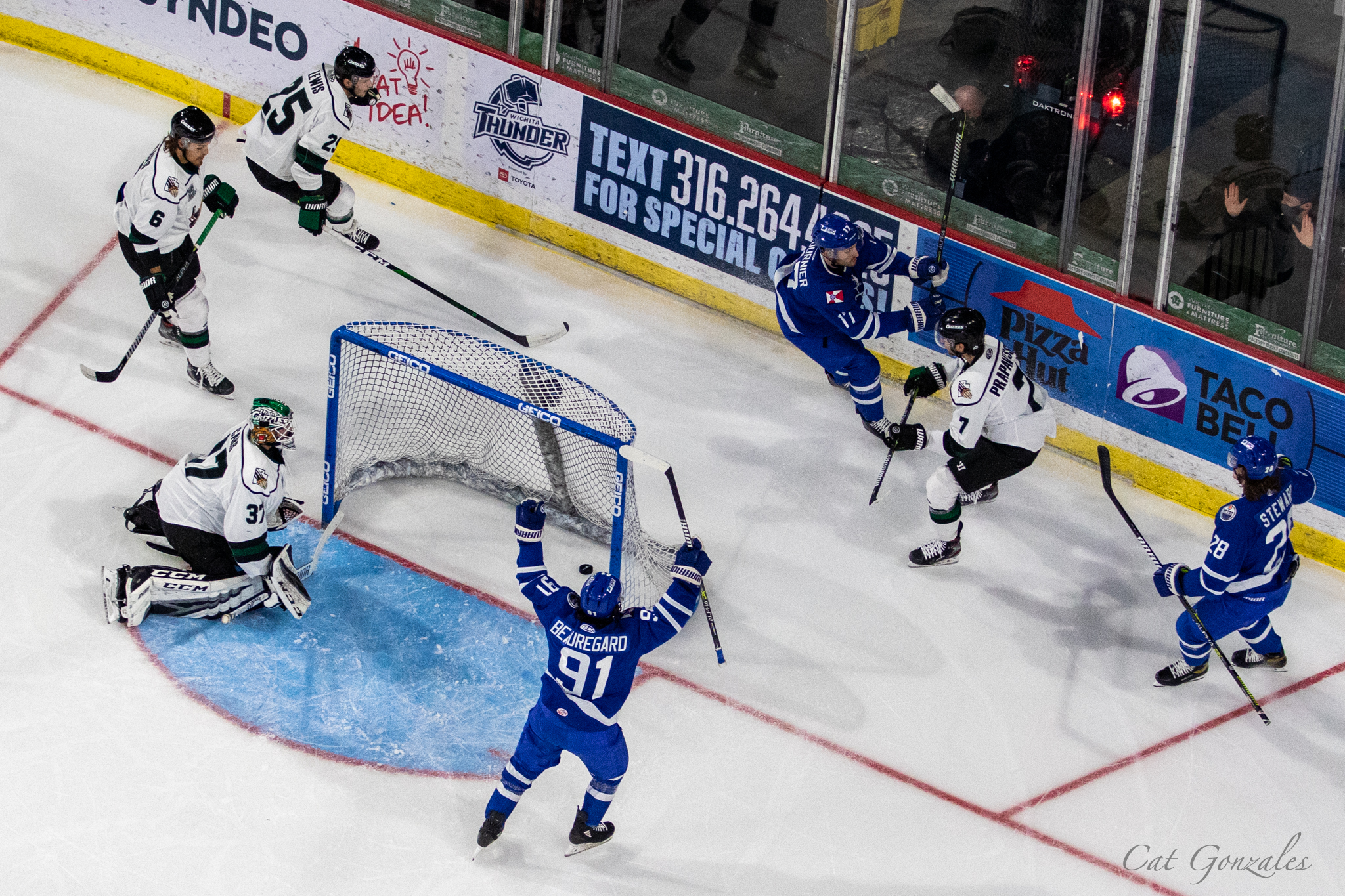 WICHITA, Kan. – How do you put into words a regular-season game that had two ice delays, two goals reviewed, two penalty discussion stoppages, a referee injury stoppage, a power-play, and a shorthanded goal?

Honestly, it took a while for us to, so here we go.

The Thunder returned home after a four-game road trip that saw them win all four games. Utah came in with points in seven of their last ten games.

Since the two teams last met, the Grizzlies have gained an edge to their game with the addition of former Thunder forward Hayden Hodgson (via trade) and Teigan Zahn (from IR) to their lineup, while the Thunder added veteran forward Ryan White, who collected more than a thousand penalty minutes in nearly 600 professional games.

Wichita got on the board first at 5:31 of the opening frame. Anthony Beauregard stole the puck in his own zone and started a three-on-two up the ice. He fed a pass to Dean Stewart near the Utah line, and he fired a shot off the right leg of Kevin Carr and Stefan Fournier pounced on the rebound for his 16th of the year. The score remained 1-0 through the remainder of the period, one that saw play controlled by both sides at varying points.

While the Thunder scored twice in the second period, the middle stanza was clearly won by the Grizzlies. Matteo Gennaro, who had been out of the lineup nearly a month, made it 2-0 with his 14th of the season. He took a shot that bounced up in the air, hit the back of Carr, and somehow went in the net. Four minutes later, defenseman Jacob Graves, fresh off his fight with Zahn, put home a rebound for his second of the year to make it 3-0.

Utah climbed back into the game, scoring four goals over the next eight minutes. The physicality didn’t stop in the period, either. White squared off with Cole Fraser after he delivered a hit to a Thunder forward who had his head down. In a rare call, White was given the extra two minutes for removing his elbow pad before the fight. Later photographic evidence suggested the pad was around half of his hand at the start of the fight. As a result of the call, A.J. White got loose on a breakaway and beat Buitenhuis at 10:43 of the period to cut the lead to 3-1.

Matt Hoover tallied a highlight-reel backhand goal at 14:44 to make it 3-2. Pat Cannone tied the game at 17:18 as he put home a one-timer from the edge of the left circle. Matthew Boucher gave the Grizzlies a 4-3 lead at 18:34 as he poked home a rebound past Buitenhuis. All told, the Grizzlies lit the lamp four times and posted 23 shots in the period.

Facing the prospect of making yet another comeback, the Thunder looked to set the tone early in the period. Sean Allen tried to goat Hodgson into a fight at the beginning of the period, but Hodgson did not oblige. Both were sent off to the box for unsportsmanlike conduct.

With Gennaro in the box for slashing, Spencer Dorowicz stole the puck near the Thunder line, raced down on a breakaway, and slid a shot that Carr appeared to stop. The Utah netminder never had control and the puck crept over the goal line for his third of the season. Carr and the Grizzlies bench pleaded extensively with the official to review the play, citing goaltender interference. The review turned up that there wasn’t a Thunder player in the vicinity of Carr’s crease when the shot was put on net, and the goal counted.

Just 118 seconds later, Garrett Schmitz had the play of the night. He made a great play as he carried the puck into the zone, delayed near the left circle, and patiently fed a pass to Peter Crinella, who fired a quick shot past Carr for his ninth of the season. The Thunder had the lead, one they would not relinquish, at 5-4.

The physicality turned dangerous in the middle stages of the period when Hodgson skated into the left corner at full speed, appeared to turn his arm up, and left his leg out. He appeared to make contact with defenseman Cam Clarke in the head and knee area. Clarke went down and needed to be helped off by teammates, but would return to the game a few minutes later. Meanwhile, Hodgson turtled when challenged by defenseman Mathieu Gagnon. It remains to be seen if there will be supplemental discipline for Hodgson for the hit.

Wichita improved to 5-9-3-0 when trailing after two periods and 5-0-0-0 when scoring a shorthanded goal. The third periods remain the best for the Thunder, where they are outscoring the opposition by a 52-34 margin.

Gennaro has four goals in his last three games and finished with two points (1G, 1A), Stewart had two helpers, while White notched his first point in a Thunder uniform and also had a fight. Gagnon collected an assist and had 17 penalty minutes. Evan Buitenhuis improved to 6-2-0-3 overall this season, 5-1-0-0 in a Thunder sweater.

The same two teams square off again tonight inside INTRUST Bank Arena. We get the night started with The Sin Bin Pregame Show at 6:25, with the call of the game beginning around 6:50 pm.