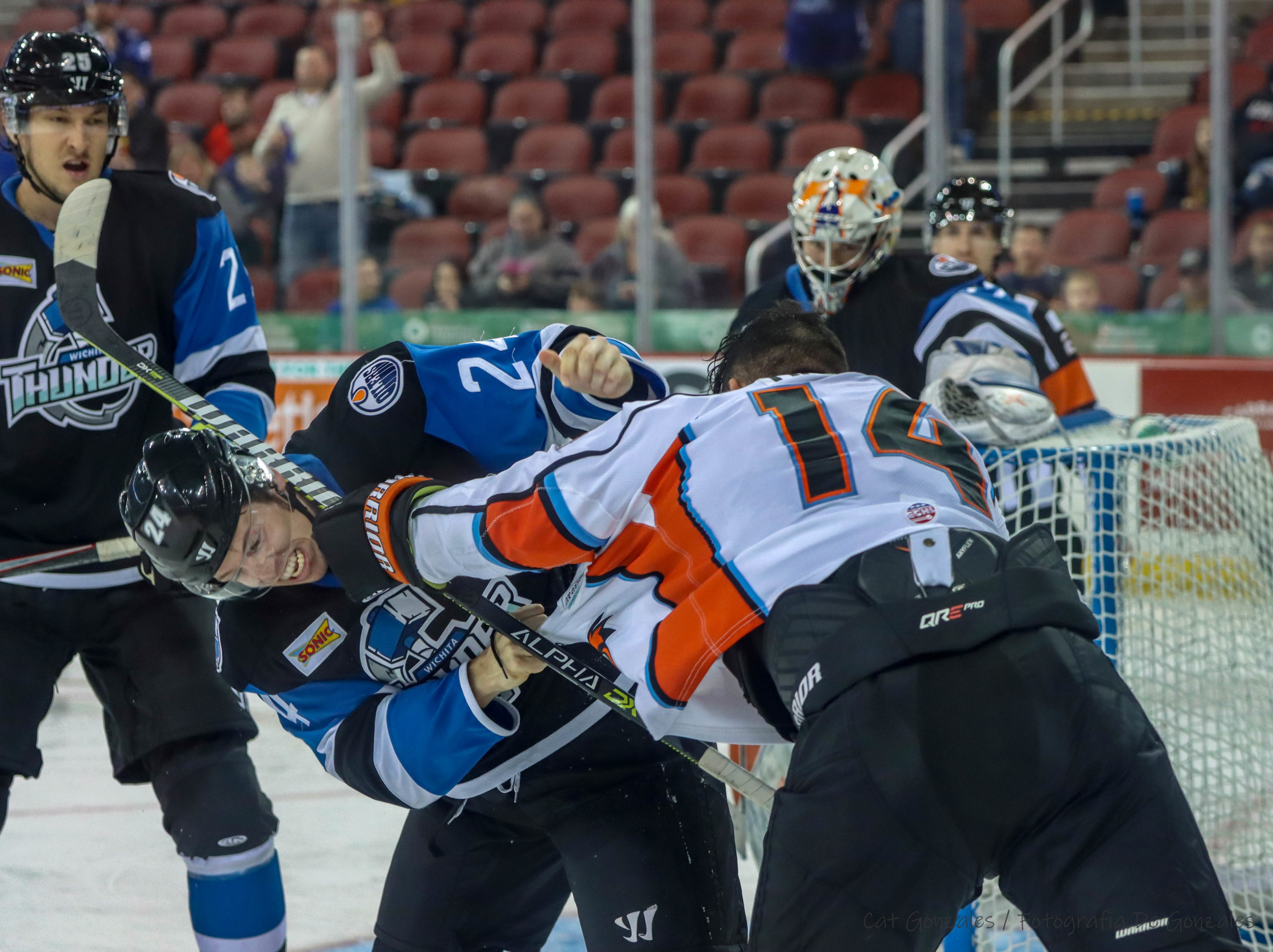 WICHITA, Kan. – Another complete game effort resulted in Wichita concluding the 3-in-3 weekend set with the Mountain division with a 4-1 win over the Kansas City Mavericks.

WICHITA, Kan. – Another complete game effort resulted in Wichita concluding the 3-in-3 weekend set with the Mountain division with a 4-1 win over the Kansas City Mavericks.
The first period saw a deadlock for the second straight night, the only times all season the Thunder have been tied after the first.
However, the first period echoed with success for Wichita, playing 13 of their best minutes of the entire season. Despite going 0-for-2 on the powerplay in the second, the Thunder had some solid chances throughout the entire last powerplay, forcing Nick Schneider to stand on his head.

“I thought THat was probably our best powerplay we’ve had in a while,” Head Coach Bruce Ramsay said. “We had lots of opportunities, good puck movement.”

After one period, Wichita was outshooting the Mavericks 11-3. The success also came at the faceoff dot as the Thunder won 15 of 22 faceoffs in the period.
Fabrizio Ricci broke the ice early in the second with a quick wrister from the slot. The shot caught Schneider off guard to give Wichita a 1-0 lead.

The scoring slowed down considerably for the next eight or so minutes as Wichita carried out their best penalty kill in weeks. Ricci and Beau Starrett combined for four blocked shots in a single penalty kill, assisting the Thunder through the second period.
The lead was increased further at 11:24 of the second when Billy Exell scored while facing loads of contact.

Wichita locked the door defensively as Jacob Graves and Vincent Desharnais quickly adapt to the new team. The Thunder carried the lead to the intermission, outshooting Kansas City 22-17 at that time.
Wichita began the third period the way the second ended, defensively sound. The Thunder forced Maverick skaters to work especially hard to earn opportunities and made them bad chances when they happened.
As the game wore on, Kansas City pulled Schneider in hopes to find some answers late in the third. 41 seconds later, Zach Osburn scored with an extra attacker out to give the Mavericks some hope, breaking Mitch Gillam‘s shutout bid.
Patrik Parkkonen ended all comeback hopes for Kansas City just 65 seconds later, scoring from the Thunder defensive zone to lock up the victory for Wichita.
Gillam allowed just one goal on the 28 shots he faced, earning the win.

“I THOUGHT [GILLAM] WAS OUTSTANDING TONIGHT,” RAMSAY SAID. “HE CONTROLLED HIS REBOUNDS WELL [AND] MADE THE BIG SAVES WHEN HE NEEDED TO.”

In the 4-1 win, Wichita was outshot 28-26. However, Wichita came out on top in hits (27-18), faceoffs (34-23) and blocked shots (10-7).
Both powerplays struggled, Wichita going 0-for-3 while Kansas City went 0-for-4.
The Thunder look to keep the good times rolling as they travel to Allen, TX to take on the Americans Tuesday night before a 3-in-3 set in Tulsa this weekend.