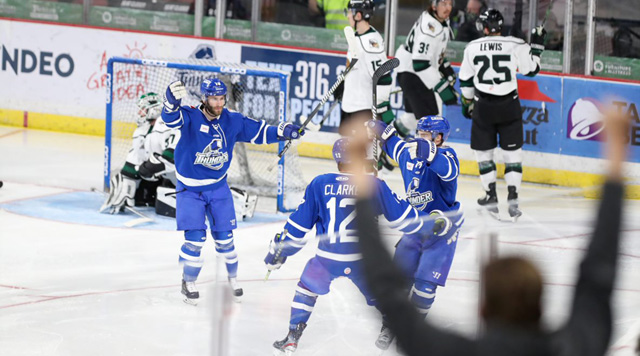 WICHITA, Kan. – Everyone faces adversity at some point in their life. Maybe it is the end of a relationship, the loss of a job, or the destruction of their home, but the reality is that adversity is coming your way whether you are ready for it or not.

Some crumble under the weight of this adversity. They allow the circumstance to rule or dictate them. For others, they look at this as an opportunity to grow and to thrive through the challenge. They simply decide that they will not be defined by the adversity, but by how they respond to it.

It takes a special kind of person to have that kind of attitude, the character of a true champion. Someone who finds joy in trying times and who draws on the strength of those around him or her to blossom to new heights. It takes a real part, the kind of heart that Wichita Thunder forward Stephen Johnson possesses.

We All Would Have Understood

Stephen Johnson grew up a hockey fan. It was the sport he embraced because his father had introduced it to him at a young age and the two gathered with his mother every Saturday to cheer on the Toronto Maple Leafs.

His parents did not just introduce him to the sport of hockey but encouraged him to play. They wanted him to have the opportunity to do the things that he enjoyed most, and there was nothing he loved more than his time on the ice. In the summer, his father would work with him as the two spent hours in the backyard honing his skills while his mother helped to get him to practices and games.

The effort by Stephen and his parents paid off, as Stephen joined the Moncton Wildcats of the QMJHL. This allowed him to play junior hockey in his hometown for four years, the final two as the team captain of the Wildcats.

The numbers were impressive, after recording 32 total points in his first two seasons, Stephen put together 42 points in 46 games in 2014-15, netting 24 goals, then added 45 points the following season, adding 29 assists. That season he helped lead his team to the league semi-finals, where they lost in six games to the eventual champions, the Rouyn-Noranda Huskies.

Doing What He Does

After four years in juniors, Stephen Johnson decided to go to college at St. Mary’s University in Halifax, Nova Scotia. Stephen majored in business, but hockey was going to be his business. The forward played in 30 games in each of his first two seasons, combining for five goals and 19 total points.

In 2018-19, he became a more prominent player on the Huskies, scoring seven goals and adding 13 assists. It would have been a sensational season, but this also became the most challenging of his life. Not only was his mother battling cancer, but his father died of the illness. It was a time that he easily have cast aside all his hard work, but it was the strength of his family and the understanding of the University that helped him through this difficult time.

“It was tough. She had breast cancer and it was tough being away from home. Then, in my third year, my dad had cancer too and he passed away. It was a pretty rough time. My family is so strong though, and they have provided such great support. The team was great to me, letting me go home whenever I needed. So, it was nice to have all the support during these tough times.”

He had leaned on his family during this difficult time, and that allowed him to keep playing, strengthening him to overcome the challenges. That proved to be huge, as his senior year was the best of his college playing career, scoring 19 goals and adding 18 assists. That earned him Atlantic University Sports Second All-Star Team honors.

“Adversity, and perseverance and all these things can shape you. They can give you a value and a self-esteem that is priceless.” – Scott Hamilton

Stephen Johnson was not drafted, but he signed with the Orlando Solar Bears (ECHL) and reported for training camp in December. However, he did not stick with the team and found himself released. It was a time where he could have opted to move on to the next part of his life, and he contemplated that. However, Stephen knew he had what it took to be a professional hockey player, and that opportunity arose with the Wichita Thunder.

“I was in Orlando for training camp and I got released. So, I was at home and I wasn’t doing anything else. I was worried about what was going on, if I didn’t play this year what would happen. I got a phone call in late February and they had an opportunity for me here. I talked with Stef (Wichita Thunder forward/assistant coach Stefan Fournier), who told me to come and the next thing you know I had packed my bags and I was headed out. It happened pretty quick.”

Stephen made the team and served many roles early on. Because of his ability to score goals, play outstanding defense, and play an integral part on special teams, the forward wound up moving around quite a bit early on in his time with the team.

However, Head Coach Bruce Ramsay opted to put him on the line with Spencer Dorowicz and Brayden Watts, and it did not take long for the trio to click. It has been their ability to build an incredible rapport with one another that has made them so formidable. It is also the fact that this may be the hardest working line in the league that has made them a real headache for opponents.

He’s Got a Sixth Sense or ESP or Something

“It is your reaction to adversity, not the adversity itself that determines how your life’s story will develop.” – Dieter F. Uchtdorf

Stephen Johnson has thrived in his role with the Wichita Thunder. He is technically on the “third line” for the team, but this is the squad that Coach Ramsay often opens contests with because they create turnovers and force opponents to make mistakes.

As injuries and roster moves have necessitated changes to the first two lines, the Coach has been adamant about keeping this group together. He has recognized how well they work together, and how they feed off each other’s play.

It is also because of all the little things that this line does to help the team. No one better exemplifies that than Stephen himself. He is an absolute menace on the forecheck, demonstrating a type of sixth sense about where opponents want to go with the puck, creating turnovers and scoring opportunities for his own team.

“I just think it’s the hockey sense I have. I watch a lot of hockey and I try to learn what they do and see how that helps me on the ice. Seeing what players will do, what their instinct is, I definitely think that helps me a lot. Just working hard and I am pretty quick, which helps.”

The group has produced 73 points this season and are often pitted against the top offensive line for opponents. It is a relentless play of this group that has made them as dangerous as any line in the ECHL, something they take a great deal of pride in.

“We love to put pressure, as much pressure as possible in their zone. I know that when we are not having our best night, we still want to find ways to help this team win. Maybe it is a block shot, creating a turnover, hopefully creating some offense. We want to be a team that does not give an inch.”

The play has impressed the coaching staff, as Stephen and Spencer Dorowicz combine to form one of the team’s penalty-killing units as well. Along with Jay Dickman and Beau Starrett, the forward pairings have helped Wichita to the third-best penalty-killing percentage in the league (87.1%), and they are the very best at killing penalties on the road at 87.3%.

That is a remarkable statistic and has played a key role in why the Thunder have been so good away from INTRUST Bank Arena this season. The club set a franchise record for victories on the road (22), and they are a combined 22-8-4 away from Wichita, by far the best record in the ECHL. Some teams have found it difficult to be at their best away from their home arena, but Stephen explains that this has only helped.

“We have great leaders and everyone is on the same page. You want to do it for each other. We have goals we want to achieve. We want to win. That definitely helps us focus and just being on the road brings us together even more. That just makes us play even better.”

The Next Challenge Awaits

“I learned to take those experiences that were difficult in my life and in the adversity that I had overcome to use it for a positive change.” – Dominique Moceanu

With the ECHL just seven days away from concluding its regular season, the Wichita Thunder are in a prime position to earn the top spot in the West Division. This will give them home ice as they likely face either the Utah Grizzlies or the Allen Americans.

This will be the first time the team has made the playoffs in three seasons, and they will likely be a prohibitive favorite. While not taking anything for granted, Stephen Johnson is definitely getting his mind in playoff mode.

“We are feeling ready for playoffs. These are just rehearsals for the big show that is coming up. We are just fine-tuning our game, getting ready for an extended playoff run.”

It would not be surprising if the Thunder are hoisting the Kelly Cup in early July. That would be the culmination of a spectacular season for this team, and would also be a moment that Stephen will relish. It will be one where he will be remembering the two people who made this dream possible.

“My parents have been so inspiring to me. Just what they went through. Seeing how proud they were of me. It makes me want to do my best every day.”

No doubt the adversity that Stephen Johnson has faced has played a key role in helping to turn him into a formidable player on the ice. Who knew it would also turn him into one of the best people a team could ask for off of it?