GLENS FALLS, NY – The Adirondack Thunder have announced they are parting ways with Head Coach and Director of Hockey Operations Alex Loh.  The announcement comes after the team’s worst season to date. 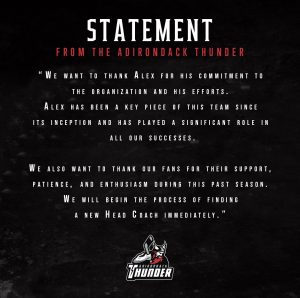 During Loh’s tenure, the Thunder had devolved from a playoff contender to a last place team.

Loh had been an assistant coach during the team’s first three seasons, then became head coach when Brad Tapper left the team prior to the 2018-19 season.

Loh saw some success in his first season as head coach, with the team earning a playoff spot as the North Division’s number two seed.  The Thunder were eighth in the league that season.

After the North Division unanimously decided to opt out of the 2020-21 season, the Thunder saw many players depart.  Some retired; some signed with other teams.  By the time the 2021-22 season commenced, the roster looked very different.

Despite boasting some big-name veterans like Shane Harper and Pete MacArthur, the 2021-22 season was the worst in the team’s history.  The Thunder went 27-40-4-0 with an abysmal 0.408 winning percentage, good for last in the league.

With Loh’s departure, that leaves Adirondack in the hunt for a new head coach, their fourth since their inaugural season in 2015-16.

It also brings up the question of the associate coaching position.  Will Pete Dineen return as associate coach?  Will he become head coach?  Or will he also be dismissed?

Field Pass Hockey will keep you updated on the coaching situation as it evolves.