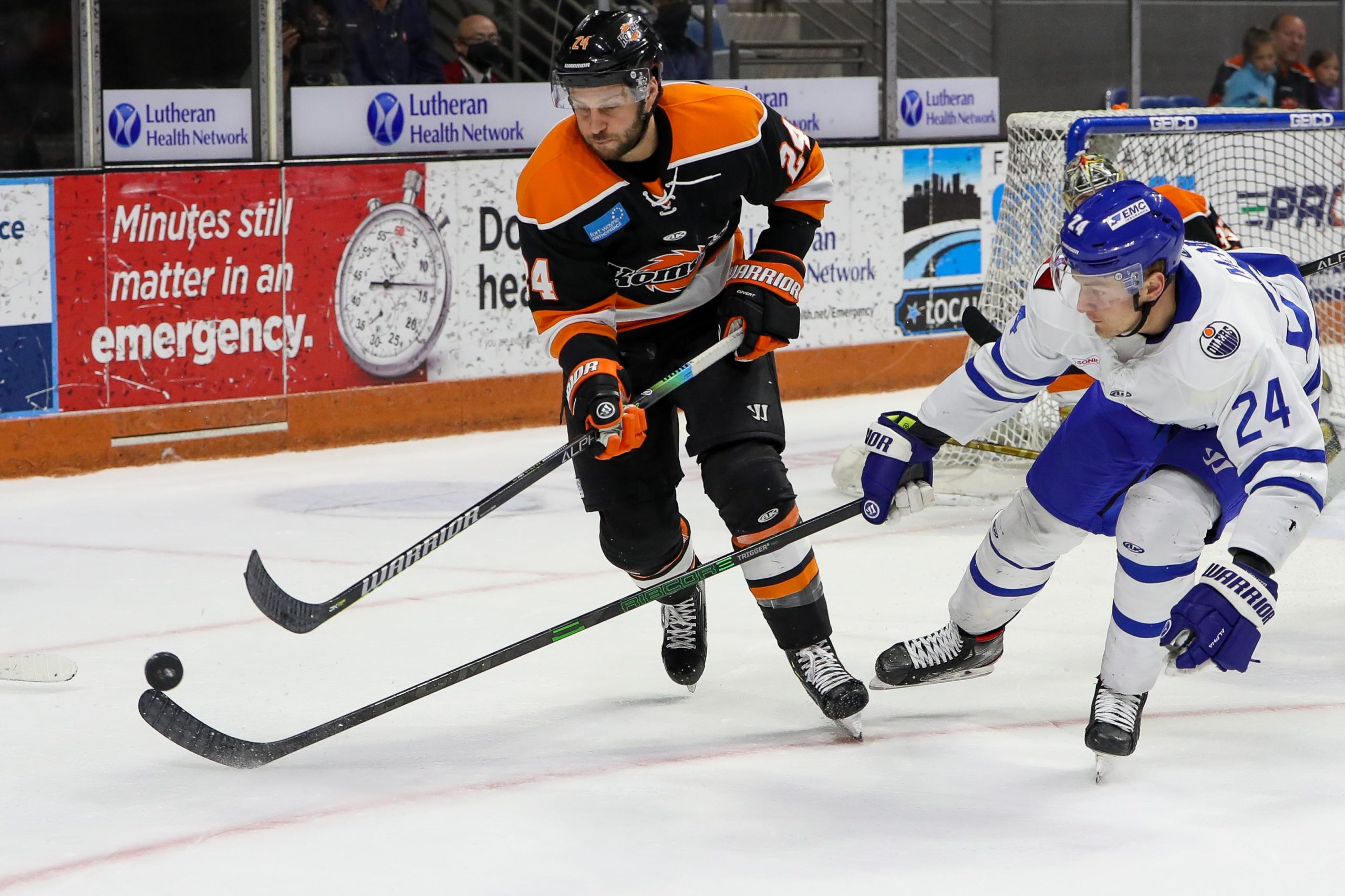 FORT WAYNE, In. – After a rough game three, Wichita was forced with the task of winning two straight games to win the series. And they got real close.

Wichita rode two third-period goals from Matteo Gennaro on Saturday to advance to game five, but the momentum ended there.

Fort Wayne wasted no time Monday night as Oliver Cooper caught Evan Buitenhuis with a wrap-around goal – one where Buitenhuis was caught struggling to get across the crease in time. Cooper’s first of the playoffs came just 2:12 into the contest.

In the spirit of first playoff goals, Bobby McMann finally found his way into the goal column just past halfway through the period, cleaning up a rebound from Jeremy McKenna. Much like Saturday night, we entered the first intermission deal-locked at 1-1.

As the second period began, Fort Wayne began to control things. A flurry of hits and offensive zone control led the Komets to their next goal, a tip-play in front of Buitenhuis from a Mathieu Brodeur shot seven minutes into the period. Thought it looked like A.J. Jenks might have got a piece of stick on it, Brodeur was credited for the goal.

Wichita answered back 25 seconds later. Gennaro found another playoff goal after picking up a misplayed puck by Fort Wayne. The forecheck was much to thank for the opportunity and it continued to be strong in the following few minutes.

The strong play from Wichita lasted until just 45 seconds remained in the period, when Anthony Nellis continued his solid playoff performance. After skating a puck along the board, Nellis cut towards Buitenhuis. He deked right then left and snuck a shot around Buitenhuis as he ran into him. Though referees went to the replay booth to review, the goal was upheld.

Wichita came out in the third period nicely, putting some quality chances towards Dylan Ferguson, who was up for the challenge. Finally, with 10:07 left in regulation, Jay Dickman found nylon for the first time this postseason. After an astounding pass from Alex Peters, Dickman was in alone on Ferguson. Ferguson stopped the initial chance but Dickman followed his own shot up, tieing the game at 3-3.

One minute later, the Wichita Thunder got just the break they needed. Brodeur thought he scored from the point but after a video review, the goal was disallowed due to goaltender interference by Nellis. It seemed like Wichita had the momentum on their side.

Fort Wayne ended up with the better of the opportunities as the third period drew to a close, but neither side could capitalize and the series saw overtime for the first time this series.

Wichita killed the remaining 53 seconds off Mathieu Gagnon‘s cross-checking penalty to begin the overtime period but things turned south just after. Matt Murphy was the first to record a key chance, nearly beating Buitenhuis to his stick side. Buitenhuis turned around to save the puck with his glove, ending the chance.

Matthew Boudens made sure his chance wasn’t just another Buitenhuis save. After an initial shot from Blake Siebenaler, Boudens backhanded a puck just under Buitenhuis’ arm to end the game, series and Thunder playoff run.

Wichita did not get an opportunity on the powerplay but did stop both Fort Wayne chances. Ferguson earned his third win of the postseason with 21 saves on 24 Wichita shots. Buitenhuis stopped 30 of Fort Wayne’s 34 shots on net. Peters (2A) and Boudens (1G, 1A) both recorded multi-point games.

The loss ends Wichita’s most successful season since joining the ECHL, one where Bruce Ramsay was named ECHL Coach of the Year, Anthony Beauregard was named ECHL Most Valuable Player and Wichita led the Western Conference for the majority of April and May.