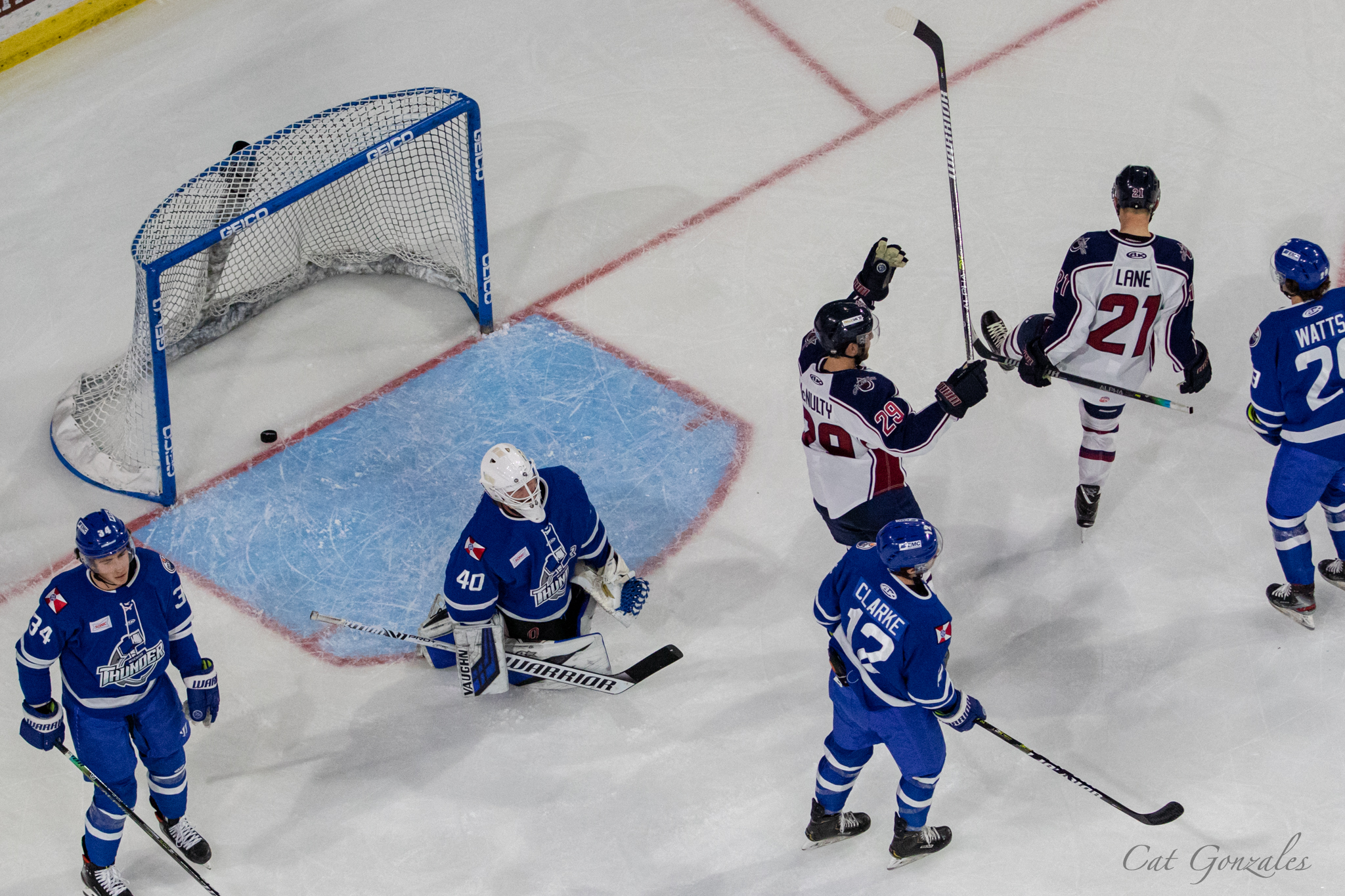 WICHITA, Kan. – The next time Tulsa and Wichita play a game where the winning margin is more than one goal will be the first. For the fifth straight time in their season series, the Oilers and Thunder played a nail-biting, one-goal contest in INTRUST Bank Arena Friday night.

For the second straight game, Matt Lane got the scoring started for the Oilers, putting a rebound by Evan Weninger to give Tulsa a 1-0 lead.

Following the goal, the Thunder’s answer back was solid, applying nearly continuous pressure on Roman Durny late in the first period. Jay Dickman tied the game with 43 seconds left in the period, when he redirected a Stefan Fournier shot by the Oilers netminder to make it a 1-1 game.

Nine seconds into a Steven Beauvais boarding penalty, Fournier, who was making his return to the lineup after a two-game suspension, notched his second point of the night at 4:40 of the second period, when he put a Matteo Gennaro feed by Durny to give the Thunder a 2-1 lead. The power-play goal for Wichita would snap a five-game, 20 power-play long goal-less drought.

Tulsa would answer back.

Charlie Sampair would level the game 2-2 with a beautiful, sharp-angle shot that beat Weninger just before the game’s midway point. From there, the defensive stalemate would be on for the remainder of the second and half of the third.

After killing off two Oilers power-play chances in the third period, the Thunder used the momentum to push for the game-winning marker. Thunder newcomer, in a relative sense, John Albert, scored his fourth of the season with 5;56 left to give Wichita a 3-2 lead.

But the Thunder couldn’t keep the momentum and the Oilers would once again answer back.

Mike McKee forced a turnover behind the goal and fed a pass to Tyler Kobryn, who netted his second professional goal to even the score at 3-3.

For the third time this season, the Oilers and Thunder would head to extra time.

In the overtime, the Thunder failed to win the faceoff. Lane fires a shot onto Weningar, who whiffs on the poke check, and Lane puts his own rebound by the Thunder tendy to give the Oilers a 4-3 win.

Wichita falls to 3-4 in overtimes this season and has not registered a win in their last three games. Tulsa, meanwhile, has won back-to-back games against Wichita.

The same two teams will finish out the Thunder’s 10-game homestand tomorrow night at INTRUST Bank Arena. Matthew Will and I start the night with The Sin Bin Pregame Show at 6:30, followed by the game broadcast at 7:00 on The Sin Bin app.