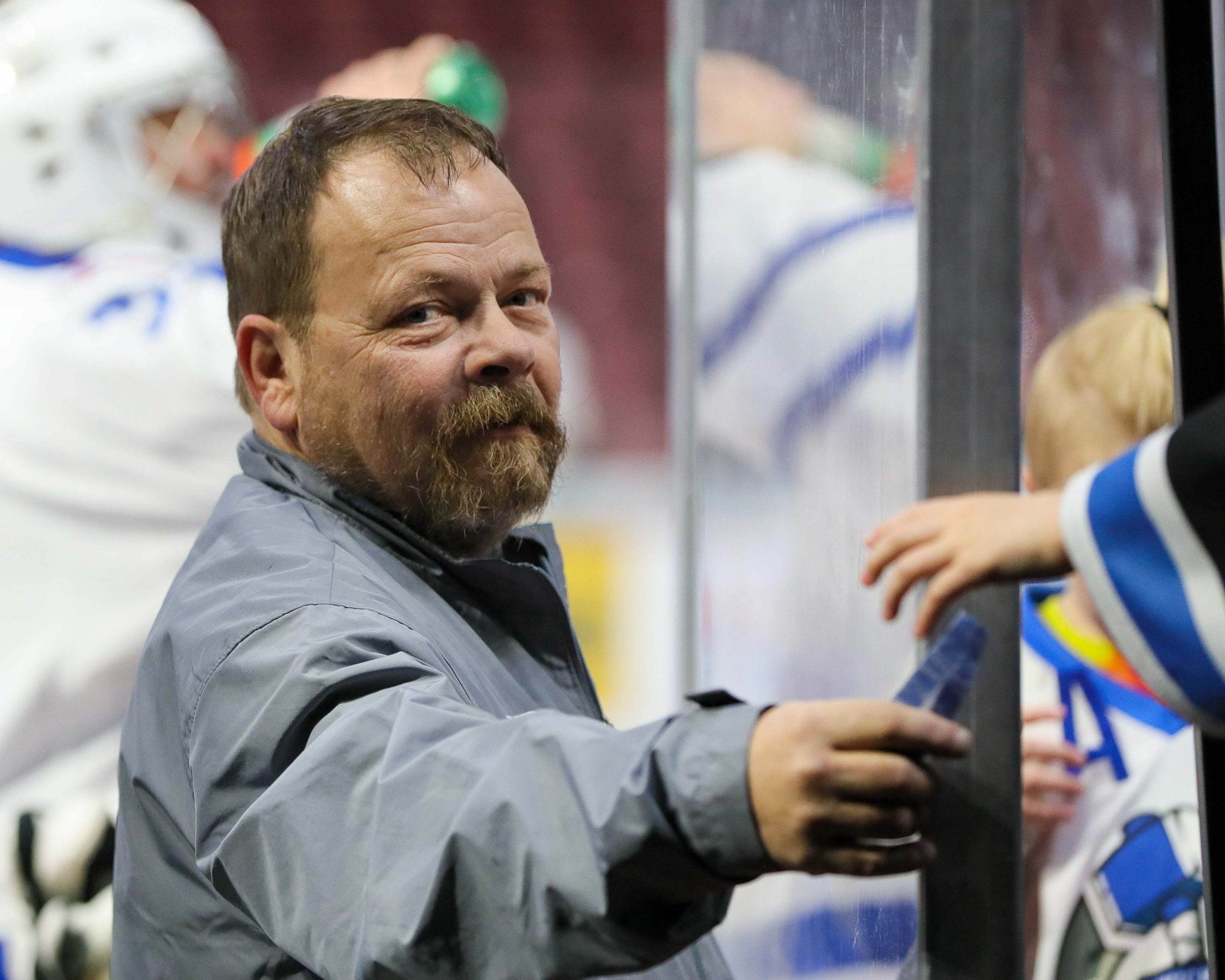 WICHITA, Kan. – They are the MVPs for any team.

The ultimate “first to arrive, last to leave guys.”

The “unsung heroes” in any organization.

Their job requires long hours; late nights, early mornings, and they can’t be scratched. In fact, the most enjoyable three hours of their workday comes while the game is going on.

Fill in whatever phrase you want, but there is little doubt the equipment manager is the super glue that holds a team together. 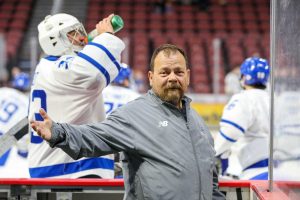 No one embodies those traits more than Wichita Thunder Equipment Manager Frank Jury, who will work his 2500th professional hockey game as equipment manager today when the Thunder hosts the Tulsa Oilers in a Kids Day game.

For the man they call “Rizzo,” the love affair with his career started at the ripe young age of six.

“I used to be one of those kids in Utica, New York – we had season tickets [to the Utica Comets] – and my dad used to collect autographs after the game and I would go try and find a player to try to get a puck or a stick,” Rizzo remembered. “Their equipment manager came out and said ‘I see you here everyday, I’m gonna put you to work.’ He took me into the locker room and he told me to get everybody’s jersey and put them in front of the washer. But the jerseys were wool and heavy, so I couldn’t get more than one at a time, so it took me quite a bit.”

He worked for the Comets’ equipment manager for six years after that, and the seeds for a career were sewn, pun intended.

The job has taken him to all corners of the United States; from Anchorage, Alaska to Pensacola, Florida. His favorite spot is Boise, Idaho, a city he dubs “Pleasantville,” because the city is clean and everywhere you look there are people biking, roller skating, or skateboarding.

He came to Wichita for the first of two stints with the Thunder in 1999 after spending the prior season in Anchorage, Alaska. The combination of the desire to slow down his travels and the city itself, led him to stay.

“When you get to a city and you’re traveling six, seven months and then you’re going back home…that’s what I used to do,” Rizzo said. “At the end of the year, two weeks after I would go home, then I would come in two weeks before. When I got here, I liked it so much I decided to stick around.” 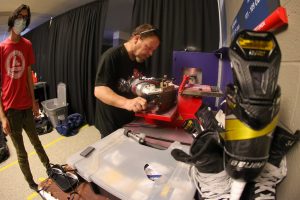 After taking some time to adopt a child, Jury returned to the Thunder in 2017. On most gamenights you’ll find him and his adopted son Dimitri, spending time together, working to make sure things are set up for the next day. The two have formed a special bond through the work they do for the Thunder.

“I always tell people to take your kid to work everyday or just game days is huge, and when you have eight or ten-game road trips, that’s time you don’t get to see each other. He travels with us so I get to see him,” Rizzo says. “We’ve become really tight and it used to affect him when I left.”

Rizzo says that having Dimitri around helps make the long workdays, which sometimes start before 8 am, go by pretty quick. The first half of the day includes prep for practice; coffee is made, sticks assembled, jerseys and skates are placed in the stalls. While practice is going on, they’ll set up the referee’s room as well as the visiting locker room, then make any adjustments the players ask for from practice.

After a short break (1-2 hours,) they go back to the rink in the early afternoon to swap out practice jerseys and socks for game jerseys and socks, plus make any final touchups to equipment prior to pregame skate.

The calm in the storm of their day comes during the game. But once the final buzzer sounds, it’s back to work. Everything needs to be washed, cleaned and for the home team, rehung. The laundry load is double if a team stays in town for the weekend.

All told, Rizzo estimated a normal workday for a home game ends between 1 and 3 am.

On the road, they are responsible for unloading players’ bags and placing them in the locker room once the team arrives at their next destination, which is usually in the predawn hours. After a short nap, the day begins anew.

Rizzo’s contributions to the team have not gone unnoticed.

“He makes things light in the locker room, but runs a tight ship,” Wichita Thunder head coach Bruce Ramsay said. “2500 games is an incredible accomplishment. Kudos to him, it’s not an easy job. He’s a great person and I couldn’t ask for a better person to work with than Frank “Rizzo” Jury.”

So how much longer does Rizzo want to do this? He doesn’t say but is quick to quote the great Gordie Howe.

“He [Howe] said ‘when you’re not having fun with the game, that’s when you walk away.'”

The one thing he does want is to go out on his own terms, and would like to turn the reigns over to Dimitri ultimately. Until that time, Rizzo is still having fun, keeping things light, and grinding hard.

“This is my NHL,” he said. “I’m doing what I want. I’m getting paid for it and I have fun. How many people get to say they get to travel for free?!”