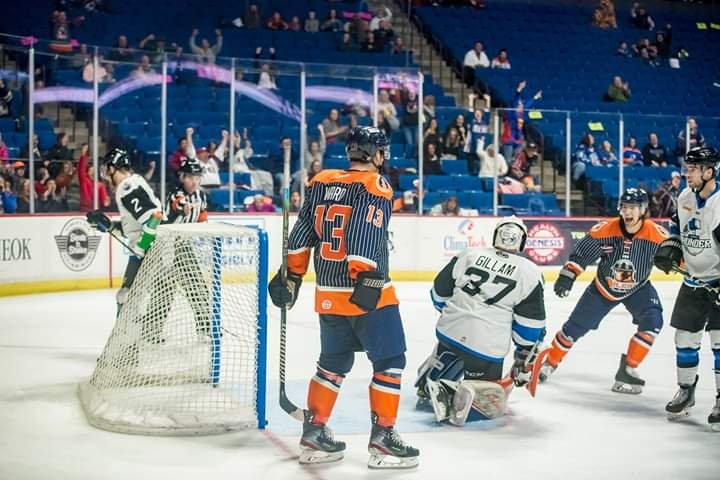 TULSA, Okla.- The Tulsa Oilers held a team meeting before the rubber match of their three-game weekend series with the Wichita Thunder on Sunday. The benefits were seen immediately.
Tulsa trailed visiting Wichita 3-2 entering the third period for a second straight day, but this time, the home squad dominated the final 20 minutes and came away with the victory.  The Oilers outshot the Thunder 22-4 in the final frame and scored three unanswered goals to secure the 5-3 outcome in their favor.
Sunday felt all too familiar in more ways than one at the start, as just like Saturday a goal against on the first shift left Tulsa playing from behind right out of the gates.
At least it took 35 seconds on Sunday instead of the mere 15 ticks the Thunder needed to break the ice on Saturday.
The opening tally came after Wichita’s Fabrizio Ricci followed the far boards to the point then quickly turned a sent the puck circling back around the base of the wall. Beau Starrett cut it off behind the Tulsa goal and quickly wheeled and wrapped a backhand effort that hopped over the leg of Olle Eriksson Ek and in to make it 1-0 Wichita with 19:25 still to play in period one.
The Oilers pushed back quickly as they would all night, however, tying the score just 5:32 later. J.J. Piccinich was the one who created the opportunity, as he pressured the Thunder defense on the forecheck and picked their pocket at the near dot.  He then spotted a wide-open Cory Ward gliding into the zone behind him and sent a perfect drop pass into the wheelhouse of the newest Oiler.  Ward blasted a one-timer over the blocker of Mitch Gillam and into the top corner for his first goal with Tulsa.  It was just the beginning for Ward on this day, and sent the game to the first intermission level at a goal apiece.
Wichita regained the lead 5:39 into the second segment when Peter Crinella skated into the Tulsa zone with space and wired a wrister under Eriksson Ek to make it a 2-1 score.   This time, though, it took the Oilers just 21 seconds to erase the deficit.  The equalizer was set up by Mike McKee who secured the puck at the line and found Charlie Sampair all alone down low.  Sampair quickly set his feet and lifting a shot from point-blank range that had the ideal trajectory to clear Gillam’s shoulder yet still stay under the crossbar.  The pinpoint accuracy made it a 2-2 game with an even 14:00 to go in the middle stanza.
The Thunder went ahead once later in the frame, as Patrik Parkkonen sent a pass from the corner that slipped through the wickets of McKee and found it’s way to Crinella at the bottom of the circle, who immediately fired a shot the found twine before the Tulsa tender could close his five-hole. The marker came with just 1:20 remaining on the clock and sent the visitors to the third with a 3-2 lead.
Tulsa was simply not going to be stopped from claiming the ‘W’, however, and put together a very impressive performance over the final 20 minutes. The Oilers completely dominated the time of possession and outshot the visitors by a lofty 22-4 margin in the third as they systematically dissected the Thunder en route to the desired result.
The momentum started building early, as just 1:06 into the period Tulsa pulled even.  It was the second point of the night for each member of the Oiler third line, as Sampair got the puck from Piccinich and sent it down behind the goal.  The puck kicked off the boards to Ward who was then able to quickly pull the puck to his forehand and send a shot from a tight angle that found a hole in Gillam as he tried his best to cover the near post to make it 3-3 with nearly a full period to play.
The score remained level at three for exactly eight minutes, before Sampair and Ward combined once again to create the eventual game-winning goal.  This time Gillam was able to make an initial stop after Sampair found Ward in the slot, but the rebound returned to Ward who slipped a seeing-eye shot that slowly slid under Gillam and into the back of the net to give Tulsa a 4-3 lead with 10:54 remaining.  It was the first professional hat-trick for the man from Las Vegas, Nevada, and it gave his team a lead they would not relinquish.
Tulsa missed a chance for an insurance talley on a late power play, but it did not matter.  Wichita never even sniffed an equalizer over the last half of frame, and with Gillam on the bench for the extra man Jack Kopacka found the yawning cage with just 15 seconds to go to provide the final count of 5-3 for Tulsa.
The Oilers’ play in the third could not have been much better and Head Coach Rob Murray talked with The Sin Bin after the game about the determination and renewed focus he saw from his team.

“We had a long meeting before the game, probably about 45 minutes actually, and it was an open forum and everybody talked.  We discussed what we needed to do and I think there was a definite mindset change going into tonight’s game and that was carried over to the third period.  More of a mentality that we weren’t going to be denied tonight.”
“I mean, 22-4 we outshot them in the third,” Coach continued.  “That’s as dominant as you’re going to get. Outside of Fournier’s chance where it was a two-on-one I really don’t think they had a look at the net in the third period.  Our power play probably let us down a little bit there, we could have iced the game, but regardless of that we did the job.”

Murray was especially pleased that his team was able to produce offense without the top line playing at the top of their game.

“A lot of good efforts from a lot of players, and that is what we need.  We need Cory Ward. We need Charlie Sampair. Piccinich was on that line.  If that is what we are going to go forward with with the structure of our lines everybody’s got to contribute.  Look at their scoring tonight, they got all their goals from their third line. Some nights you need that. Kopacka and Danny’s line on Friday was outstanding, but really nothing last night and other than Jack’s empty-net goal they weren’t really as visible or as dominant today.  So, that’s when you need other guys to step up.”

It was the so-called checking line that was the difference-maker on Sunday, sparked by the addition of the newcomer Ward.  Ward was playing in just his third game in Tulsa after being acquired from Cincinnati last week, but you would never know it if you just looked at the chemistry he already has with Sampair and Piccinich.
Ward spoke with The Sin Bin about his new linemates and how he is fitting in with the team as a whole.

“I think since the first day I have clicked really well with them.  All the guys are kinda gelling together and I think it was a good all-around effort.
“What helps is it’s with a lot of good guys and they really invited me in really well and I already feel like part of the team.  So, that definitely makes me feel a lot more comfortable with playing my game.”
“Most of the season it’s been a little frustrating for me to be honest, and it’s definitely relieving to come in, like I said, with a bunch of really good guys and help produce and help the team win.”

Ward was then asked if he would like to continue playing with that line and Sampair in particular, and while he is clearly on board with that idea he was quick to reiterate that it was a full team effort that got the job done.

“Yeah, absolutely.  I mean obviously we gelled really well tonight, but like I said we have a really good, solid lineup top to bottom.  I mean, we can put anyone anywhere and I think they will be successful. I think it’s a good all-around effort.”

Sampair also spoke with us after the game about the Oilers effort on Sunday and if he is excited at the prospect of continuing to play with Ward.

“Yeah, definitely.  You know, I think we obviously had some success tonight and I think he’s a great addition to our team.  He works hard. He’s a smart player. So, take that going forward and kinda just run with it.”
“you know, Coach, he sorta tweaked the lines a little bit tonight.  He put me with Piccinich and Ward, and we found some early chemistry.  We had a meeting before the game and we just talked about working a little harder and getting a little more done and having a purpose with our shifts, so we kinda just took that to heart and things kinda fell in line for us and we came out on top.”

While the offense production of the third line was plainly visible for all to see, Coach Murray said their effort on the defensive end was every bit as important.

“It’s two-fold.  Their top line of Dorowicz, Hebig, and Safin who killed us last night and they filled the stat sheet last Saturday in Wichita as well.  Hebig and Dorowicz both minus-4 and Safin minus-3, so our perceived checking line got the job done for us and kept them off the scoresheet and, you know, obviously made the difference for us on our side of the scoresheet.”

The Oilers now turn their attention to a Thursday night battle with the Utah Grizzlies inside the BOK Center before heading out on a five-game road trip to close the 2019 portion of the schedule.  Sampair says the team just needs to remember what was said before the game to keep the momentum building through the holidays and into 2020.

“We got two out of three this weekend, so we came out on top.  Like I said, we had a meeting before tonight and we just have to remember the things we said and carry this momentum into next weekend and then through Christmas and come back ready to play.”

Tulsa and Utah will drop the puck at 7:05 p.m. on Thursday in the first meeting of the season between the two divisional rivals.  The Oilers claimed victory in four-of-seven meetings during the 2018-19 campaign.
You can follow along Thursday, as you can all season, by following us on Twitter where we live tweet each game.  Simply follow @SinBinOilers for our Tulsa take, and @SinBinNews for all your AHL, ECHL, SPHL news and notes.