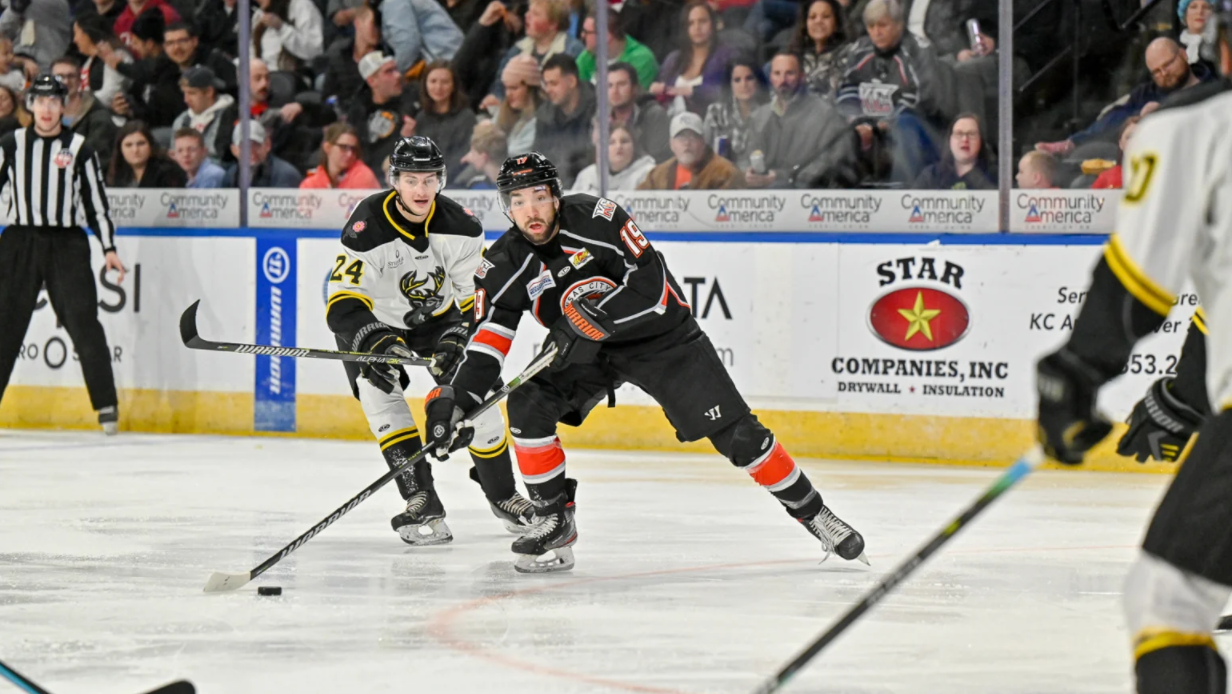 Iowa found themselves trailing by three after one period, but rallied twice in this contest to tie the score to force the extra session

CORALVILLE, Iowa – Loren Ulett scored the game-winner just 24 seconds into overtime to spoil a great comeback by the Iowa Heartlanders as the Kansas City Mavericks earned a 5-4 victory on Friday evening. Iowa found themselves trailing by three after one period, but rallied twice in this contest to tie the score to force the extra session. Jake Smith continues his hot run, scoring two goals and adding an assist. Ben Johnson scored a hat trick for the Mavericks.

Kansas City jumped out in front 4:48 into the contest on the sixth goal of the season by Bryan Lemos. Lemos carried the puck through the neutral zone and into the Heartlanders end. When he got just above the left face-off circle, the Kansas City forward fired a wrist shot that beat Iowa netminder Trevin Kozlowski to the glove side to make it a 1-0 Mavericks lead.

Just after the six-minute mark, Johnson scored his first tally of the night. Kozlowski left the puck behind the net for his defenseman, but he was beaten to the puck by Ulett, who tapped the puck in front to Bailey Conger. Conger left it for Johnson, who fired a wrist shot over the shoulder of the Iowa netminder for his eighth goal of the season and first of the night.

With 1:34 left in the third period, Johnson extended the lead to three. The shot from the point was knocked down in front, but the deflection was loose in front of the net where Johnson swept in, corralling the puck on his stick before firing a wrist shot into the upper right corner.

This contest looked like he was all but over as the Mavericks were dominating the Heartlanders. However, Iowa put on an impressive run in the second period, outshooting Kansas City 24-7 to help them tie the score. That came courtesy of Smith, who scored two power-play goals and added an assist in the frame.

Danil Chechelev had been outstanding through the first 35 minutes of the contest in his return to the Mavericks, but the special teams for Iowa began to chip away at the lead. At 15:44, Smith notched his first goal of the night. Smith had the puck along the half-boards just above the left face-off circle. He moved off the boards heading toward the slot before ripping a laser past Chechelev for his sixth goal of the year.

With just under three minutes left in the frame, the deficit became one. Smith outraced the Mavericks defenseman to the puck inside the Kansas City end. He then made a great feed across to Jack Billings in the slot, who redirected the puck past Chechelev to make it a 3-2 game. It was the 10th of the goal of the season for Billings.

The Heartlanders were on a roll, but they were not done. With 1:17 left in the period, Smith scored on the power-play once again. Carter Shinkaruk had the puck at the point, passing it to Smith at the left face-off circle. Smith ripped a one-timer past the Mavericks netminder to tie the score at three.

Iowa was rolling, but Kansas City retook the lead 1:41 into the third period on a power-play goal by Johnson. Lane Scheidl had the puck just to the side of the net. He tried to ram it past Kozlowski, but the Iowa netminder was able to make the save. Unfortunately for Kozlowski, the rebound deflected to the opposite side, where Johnson tucked it in to put the Mavericks back on top.

The lead lasted less than seven minutes before Kaid Oliver tied the score. Kansas City was trying to clear the puck out of their end, but Fedor Gordeev intercepted the attempt, passing it to Oliver who ripped a wrist shot by Chechelev for his fourth goal of the season.

It was an impressive comeback by the Heartlanders, but Ulett delivered the game-winner 24 seconds into the overtime. Marcus Crawford left the drop past for Ulett, who lifted a wrist shot past Kozlowski with the game-winner.

The Heartlanders head to the road for a pair of games against the Indy Fuel starting tonight. The puck drops at 6:00.