CLEVELAND – The Cleveland Monsters are rounding the corner on their 2020-21 season. In less than three weeks, barring any last-minute announcements of an AHL postseason, they are done for the year. Usually, this is an easy time for the team: they are in a nice rhythm, everyone is loose, and everything is in place. But would it be 2021 without something utterly bizarre happening?

The Monsters have found themself with a bit of a goaltending issue. OK- a big goaltending issue. When the sun rose in Cleveland on Wednesday morning, veteran netminder Brad Thiessen was the single goalie on the roster. So, how did they get to this point?

It all started on Sunday night in Tampa, Florida. Columbus Blue Jackets goaltender Joonas Korpisalo left the game against the Tampa Bay Lightning with what the team described as “a lower-body injury.” Elvis Merzlikins would then come in as relief in the third period, finishing out the night.

By noon the following day, both the Monsters and Blue Jackets announced a bit of a goalie carousel. Matiss Kivlenieks was moved to the Blue Jackets’ taxi squad, switching spots on the Monsters roster with Daniil Tarasov.

Everything looked settled—no big deal. Even if Korpisalo went on the Injured Reserve list, that would leave Merzlikins and Kivlenieks to man the Blue Jackets crease. Cam Johnson would fill the requisite taxi squad spot.

It came as little surprise when the Jackets announced on Tuesday that Korpisalo would miss the remainder of the season. The team subsequently announced that Kivlenieks was moved to the active roster.

Enter in the plot twist.

At the same time, they announced that Tarasov was added to the taxi squad from Cleveland. It looked as though Columbus was housing four healthy goalies and one on IR to the outside world. Cleveland was left with Thiessen for the time being. Some fans and media alike wondered why all the two-way goalies were in Columbus. Maybe they just wanted to get the goalies all in on a practice or something?

Actually, a source in Columbus has shared that Johnson is currently unavailable due to COVID protocols. However, since he is on the taxi squad, he doesn’t actually appear on the NHL’s official list.

Let’s recap. Columbus has Merzlikins and Kivlenieks on the active roster, with Tarasov on the taxi squad. Korpisalo is out injured for the remainder of the season. Johnson is not practicing and is unavailable due to COVID protocols. Thiessen, meanwhile, is the lone goalie in Cleveland. 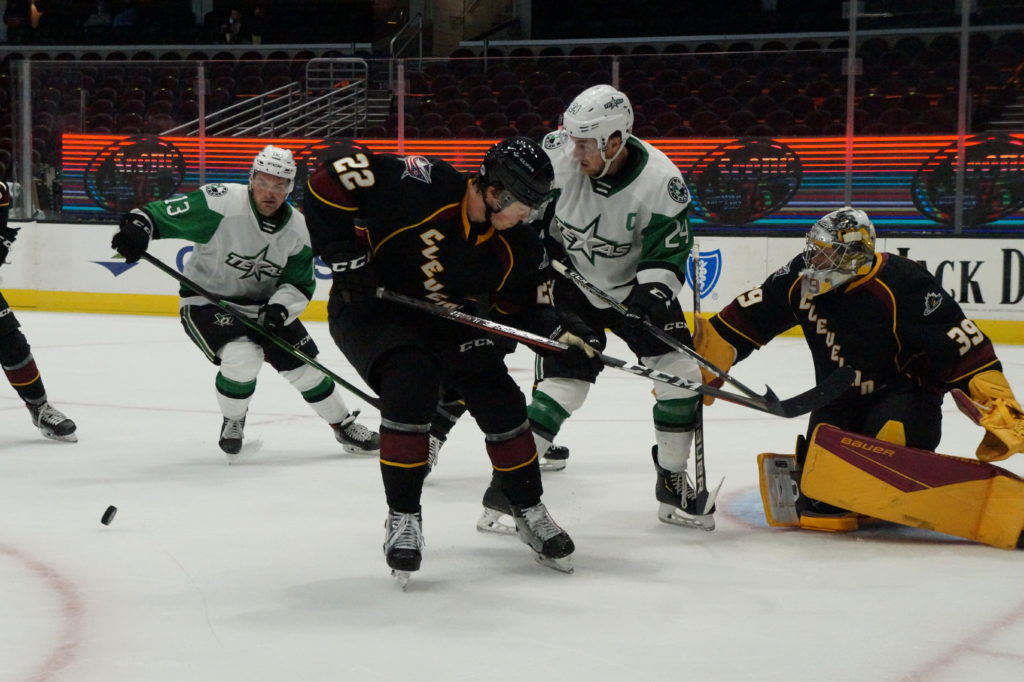 What does Cleveland do from here? We looked to get an answer on Wednesday morning with the signing of Justin Kapelmaster to a professional tryout contract.

Paging plot twist number two. Sources with Kapelmaster’s ECHL team, Allen Americans, state that Cleveland called on Kapelmaster because of the Monsters’ upcoming three-game series against the Texas Stars that starts Thursday. The Monsters were limited on available goaltenders because of COVID travel quarantine protocols. Right now, according to the sources, they expect this to be a short contract, potentially only lasting for this weekend.

So, the Monsters look to be potentially taking two potential routes with this:

With the ECHL steaming towards the playoffs, I doubt many teams would want to make any of their goaltenders available, aside from the occasional short loan.

The Monsters do have the advantage of Thiessen being more than capable of holding down the crease until either Tarasov, Kivlenieks, or both guys get back. The 35-year-old veteran of 287 AHL games proved early on this season that he’s still more than up to the task. Thiessen has a 4-4-1 record this season with a 0.906 save percentage and 2.80 goals-against average. With Cleveland’s offense surging, that should be enough to get it done.

As confusing of a situation as this is, there is a bit of upside. The regular season for the Blue Jackets will end on May 8th. The Monsters have an additional three games after that: two at home versus the Grand Rapids Griffins and one in Grand Rapids.

This situation actually could work out in the long term for the Monsters. It is always good to see new players to watch how they fit in and respond in certain situations. This will possibly help them out in the future should a similar situation happen.

Though, we can only hope that this will never be a repeat situation.