INDEPENDENCE, Mo. — Playing in just their third game of the season, we saw quite a few firsts for the Toledo Walleye as they took on their first Mountain Division opponent of the season in the Kansas City Mavericks.

INDEPENDENCE, Mo. — Playing in just their third game of the season, we saw quite a few firsts for the Toledo Walleye as they took on their first Mountain Division opponent of the season in the Kansas City Mavericks.
We saw goaltender Kaden Fulcher for the first time this season. Additionally, the Walleye earned their first fighting major and their first shorthanded goal on their first penalty shot of the season. Overall it was a sub-par performance by the Walleye in almost every facet of the game. A win tomorrow will require adjustments, but there were some bright spots tonight in Toledo’s 6-4 loss.
Missed opportunities killed Toledo’s momentum early
The start of the first period had a much different feel than the beginning of the third. Toledo was keeping pace with Kansas City, even out-shooting them in the first period. Toledo did fall short where it matters – the scoring department. Kansas City got the lone goal in the first period, and it seemed that with the goal came momentum. There were many opportunities that Toledo could have scored but seemed unable to pull the trigger. For instance, take a look at the screenshot below on a play where Toledo failed to register a shot attempt. Golden opportunities like this don’t happen often. If they are to contend, Toledo has to make the most of scoring chances off of turnovers. 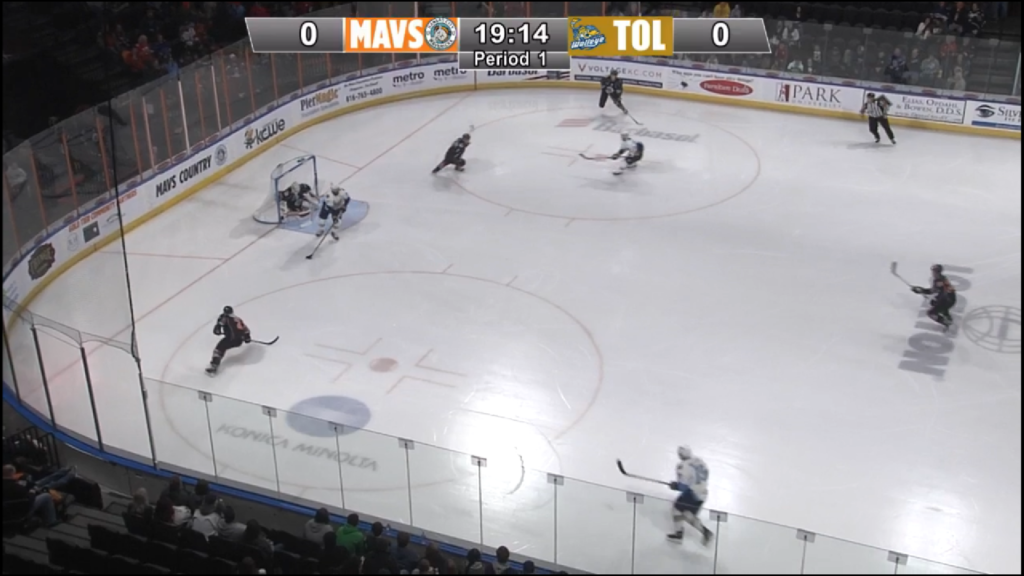 Not an ideal performance for Fulcher
That first goal did nothing for Fulcher’s confidence, and neither did allowing a wraparound goal early in the second period. Throughout the game, it appeared that Fulcher struggled with rebound control and being out of position, both of which attributed to the first two goals allowed for him. Tomorrow we will most likely see Pat Nagle back in net, but it was tough to see the young Fulcher have some slip-ups like that. Fulcher’s teammates didn’t do the best job of preventing quality shot chances, as is explained more below.
A mixed bag of emotions when it comes to special teams
Tonight, Toledo scored three power play goals on six opportunities. Toledo also allowed three power play goals on six penalty killing opportunities. The first two power play opportunities for Toledo were plagued by Toledo having a difficult time trying to enter the zone. Kansas City constantly out hustled them to loose pucks during these opportunities and did a great job of killing off the penalties. Later in the game, Toledo did a fantastic job of moving the puck and maintaining possession, particularly on the goal by ECHL rookie, and California native, Troy Loggins. More cross-ice passes in the offensive zone like this will lead to more power play goals. If Toledo can take their second half of power play opportunities from tonight into tomorrow, then they will be in good shape for a win.

Shot quality matters
This one is obvious in theory, and anyone who follows me will know that I preach shot quality religiously. It is also no secret that shot quantity matters too. Tonight, the Walleye fell short in both categories, outshot by the Mavericks 36-21. When displayed on a map, it is clear that Kansas City had more quality shot attempts than Toledo.

On many of these shots, Fulcher was left out to dry, but the Toledo offense didn’t do an adequate job of generating shots from inside the slot, nor did they create many scoring chances.  Fortunately for the Walleye, their next game against Kansas City is less than 24 hours away, and this time it will hopefully have a different outcome.