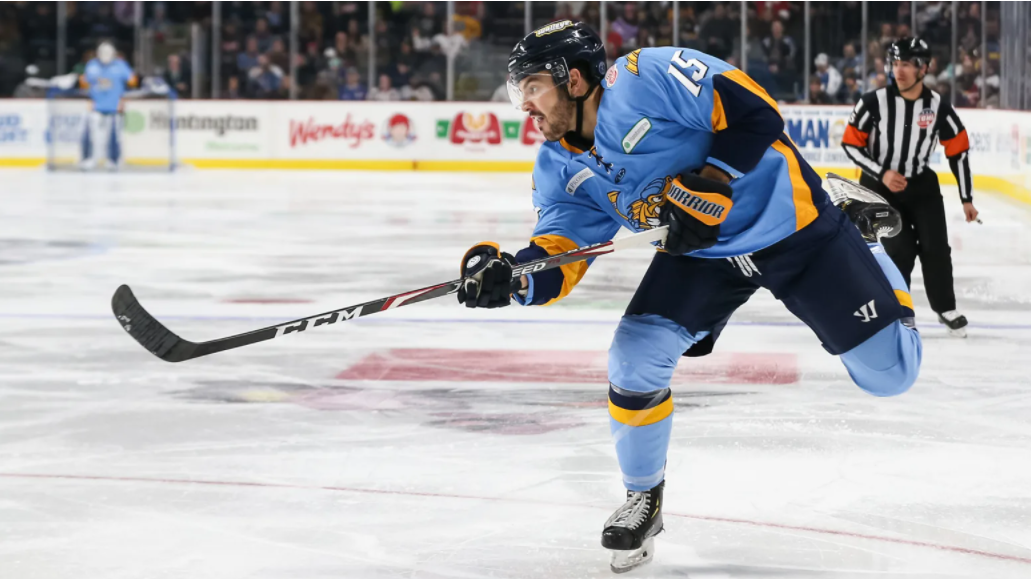 TOLEDO, OH – Marcus Vela is proving to be quite the thorn in the side in the Iowa Heartlanders this season. After scoring four goals and adding an assist in the first two meetings, including a hat trick, the Toledo Walleye’s forward put up two goals on Friday evening to lead Toledo to a 5-1 over Iowa. Hunter Jones had another tough night against the Walleye, stopping 26 of 31 shots to take the loss.

The Walleye took command of this game from the start, scoring three first-period goals. Josh Dickinson put his team in front 5:27 into the contest. TJ Hensick passed the puck off the boards to Matt Berry who was cruising down the high slot. Dickinson was able to move past the Heartlanders defenseman, and Berry fed him right in front of the crease. The Walleye forward moved to the far post before putting a backhander past Jones for his fourth goal of the year.

Just after the 12-minute mark, the lead became two. Blake Hillman shoveled the puck across the point to Butrus Ghafari, who fired a shot that Jones knocked down, but the rebound came right to Brady Tomlak, who put it in for his second goal of the year.

Toledo continued to put on the pressure, and that helped Vela record his first goal of the game with 3:10 left in the frame. Chris Martenet moved the puck up the boards to Vela, who carried it into the Heartlanders end. It looked like Vela may continue down around the net along the boards but, just before he got to the goal line, he changed directions toward the slot. That abrupt change led to the Iowa defenseman losing his edge and falling down. Vela moved into the slot where he used another Heartlanders player to shield Jones before firing a wrist shot that beat the goaltender high over the glove side shoulder to give Toledo a 3-0 lead at the end of one.

Toledo outshot Iowa 12-9 in the first period, but dominated in the second, putting 12 shots on Jones to just five for the Heartlanders. That helped the Walleye extend their lead 1:09 into the period when Berry scored his sixth goal of the year. With Toledo on the power-play, Blake Hillman moved the puck to Hensick, who found Berry for the one-timer to make it a 4-0 Walleye lead.

Vela added the fifth unanswered goal of the game at 9:42, scoring his second goal of the night. A bad turnover in the neutral zone gave Vela a breakaway. He swept in from the left of Jones, waiting to get the goaltender sliding across the crease before tucking the puck through the five-hole to make it 5-0.

The Heartlanders had been completely dominated by Toledo and by Victor Brattstrom, who was making his first start for the Walleye. Brattstrom had been perfect through the first 50 minutes, but the Heartlanders finally got on the board thanks to a power-play goal by Bryce Misley at 10:53. Kris Bennett made a great feed to the left faceoff circle, where Misley blasted a one-timer by the Walleye netminder for his second goal of the year.

Iowa was on the board, but that would be all the offense it could muster as Toledo finished off the 5-1 victory. Brattstrom finished with 19 saves for his first win in a Toledo uniform. Berry had a goal and an assist and Hensick and Hillman each had two assists.

These two teams will go at it again on Saturday evening. The puck drops at 6:15 CST..