Wanted! Back Up Goalie!

Wanted! Back Up Goalie! 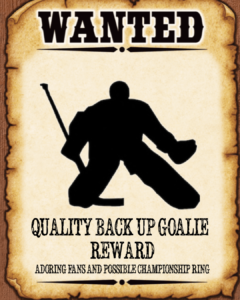 BIRMINGHAM, Ala. – On Thursday evening before a crowd of more than 2,400, the Knoxville Ice Bears defeated the Birmingham Bulls by a score of 7-0. This isn’t about just Thursday nights game, but about the lack of back up goaltending for the Bulls this season. Coming into the season, the question was who will be the starter to fill the hole left when Mavric Parks retired. That question has been answered very loudly with the play of Artt Brey, who has played as well as any goaltender in the SPHL this season. Brey leads the SPHL in saves (411) and appearances (13). His .930 save percentage is tied for fifth in the league and he’s tied for fourth in wins (6).
The problem for Birmingham right now is when it’s time to get Brey a break. He has started 11 of Birmingham’s 14 games this season and has had to come off the bench in two other games because of the lack of puck stopping ability from the other netminders. The two backup goaltenders to don the Bulls jersey this season have combined for horrid numbers. Brody Claeys and Carson Chubak combined are 0-2 with a goals against average of 6.37. They’ve combined to stop .844 of the shots faced.
This is different than what was the norm in Birmingham for the last two seasons. No matter who the starting goalie was, the back up was always more than capable to play on the nights the starter needed a day of rest. In the previous two seasons, the Bulls have had six players dress as back up goalies, not counting the one emergency back up Birmingham used in the expansion season. Those six players combined to go 23-18-2 with a 3.48 GAA and a combined save percentage of .903.
The question now is which way does coach Jamey Hicks go with his 2019-20 Bulls team? They can continue to ride the stallion that has become Artt Brey, but as the season continues on, he will get tired and worn down. That is no knock on him as a person or his athletic ability but based on common sense. As we reach the quarter pole of the season, Brey has faced 105 more shots than the next closest goalie in the league. It doesn’t matter who you have between the pipes a consistent assault like that from the opposition will eventually wear a goalie down.
In my opinion, Birmingham needs to find a capable backup goaltender much sooner than later. I believe the Bulls are heading down a slippery slope right now. With the lack of scoring Birmingham has shown through 13 games, a reliable netminder is more important than ever. If the lack of back up goaltending continues, the road to the Presidents Cup will not be a long one for the Bulls this season.