DES MOINES, Iowa – It may never be an opportune time to face the second best team in the AHL, but doing so a night after facing the top team in the league — then taking a seven hour bus ride home to face a team that has been resting two days — makes the task all the more daunting.

DES MOINES, Iowa – It may never be an opportune time to face the second best team in the AHL, but doing so a night after facing the top team in the league — then taking a seven hour bus ride home to face a team that has been resting two days — makes the task all the more daunting.
ARVE Error: No oembed src detected

That was the challenge the Iowa Wild faced on Saturday night as they welcomed Tucson Roadrunners. A bus-lagged Iowa team gave up four goals in the first 28 minutes, falling to Tucson, 4-1.  Jon Martin scored twice for the Roadrunners, while Gerald Mayhew netted his team leading 14th goal of the year for the Wild. 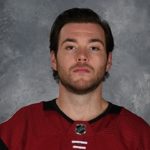 Iowa nearly took the lead when they turned a short-handed situation into a 2-on-1 break. Mayhew outraced a Tucson defender following an errant pass in the Iowa end. He carried the puck in, then made a great feed to J.T. Brown near the left corner of the Roadrunners goal, but Brown could not pull the trigger.
The Roadrunners regrouped and controlled play through the first eight minutes. They took the first five shots of the contest, turning two of those opportunities into goals. The first came exactly six minutes into the game. Andy Miele passed the puck back to Kyle Capobianco at the point. Capobianco skated toward the goal, weaving around a defender before putting a wrist shot between Wild goaltender Mat Robson and the post to make it 1-0.
Just 76 seconds later, the Tucson lead became two. A deflection off the back of a Wild player’s skate sent the puck back in the Iowa zone. Jeremy Gregoire then knocked the puck to Kevin Hancock who fired a shot on goal. The puck hit off Martin, then off Robson, who was not able to stop the deflection. It went over him and into the net for Martin’s seventh goal of the year.

The Wild were able to start to turn the tide as the first period progressed, but a penalty to Louie Belpedio allowed the Roadrunners to extend their lead to three. Belpedio went to the penalty box at 13:41. Tuscon then won the draw. Nick Merkley passed the puck across the crease to Brayden Burke who buried the one-timer seven seconds into the man advantage.
At 7:35 of the second, Tucson took a 4-0 lead. A shot by Gregoire was saved by Robson, but the puck was loose in the crease. Martin was finally able to bang it in for his second goal of the game. That was the fourth goal for Tucson on just 13 shots.
The contest had gotten ugly for Robson, who had been pulled from Friday night’s game in Milwaukee. However, he was brilliant after allowing the Martin goal. The Iowa netminder stopped the final nine shots he faced, including making a couple of big saves late in the second period.
The Wild were finally able to get on the board with 2:34 left in the middle period. With the Roadrunners on the power play, Mayhew was able to knock the puck away from a Tucson defender, then headed the other way on a breakaway. He beat Ivan Prosvetov glove side with the short-handed tally to make it 4-1. That would be the final.
After the game, Wild Head Coach Tim Army talked about the challenge of trying to stay fresh on Saturday.

“This is not an excuse, but it’s reality. We played last night in Milwaukee and we bus back six and half hours to get back ,and we pull in at 4:30. [Tucson] rolled in here Thursday night, so they’ve been waiting two nights. There is something to it starting a game like that. It’s a huge advantage for them.”

While a tough beginning, the Coach was pleased with his team’s effort.

“I think we had good effort early. We were just trying to find our legs.”

These two teams will meet again in Iowa on Tuesday. The opening faceoff is set for 7:00 CST.
Follow Robert on Twitter for Iowa Wild news and analysis! Also, don’t forget to “like” The Sin Bin on Facebook for more AHL, ECHL, and SPHL minor league hockey coverage!