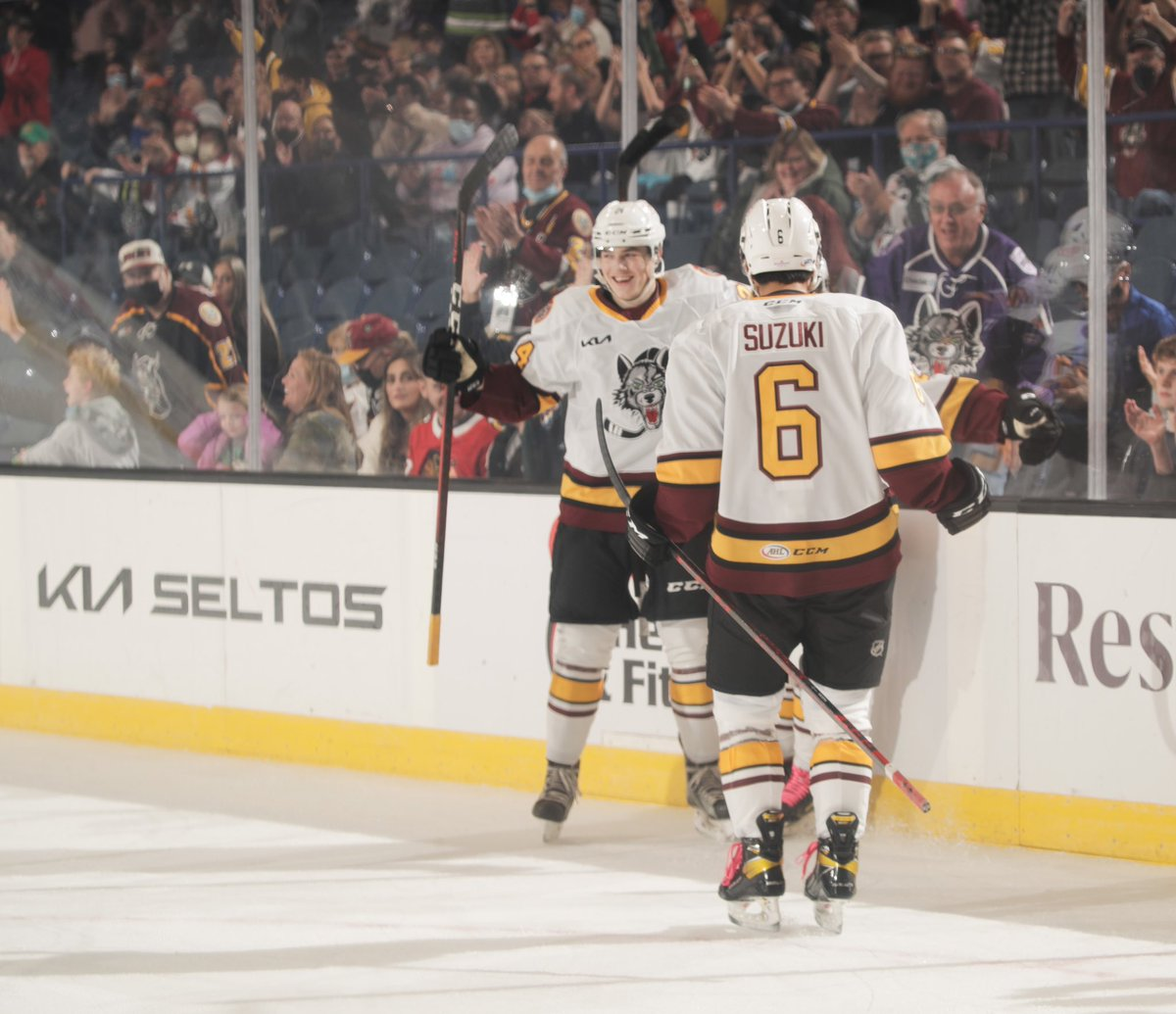 ROSEMONT, Ill. – Four teams in the AHL decided to opt-out from playing in the 2021 season out of an abundance of caution – the Milwaukee Admirals being one of those teams. Nashville agreed to a one-year affiliation with the Wolves to give their players some playing time, sharing that distinction with Carolina. Adding to an already talented lineup, a total of 19 Nashville products suited up for the Wolves in their shortened season, including co-top scorers Phil Tomasino and Tommy Novak along with de facto team captain Tanner Jeannot, whose excellent play in the first half of the AHL season earned him a callup to Nashville, where he remains a dynamic piece of the Predators’ lineup.

The Wolves held two exhibition games with Milwaukee, and on Friday night in UW-Milwaukee Panther Arena, the split was made official with the two teams squaring off for the first time since their dual affiliation. Devin Cooley, another former Wolf, got the start while Eetu Makiniemi made his North American debut for the Wolves.

While many players shared a locker room earlier this year, it didn’t take long for former teammates to be reminded of their divisional rivalry this weekend.

Where Chicago struggled in their home opener to maintain momentum, they’d managed to turn their luck around in this game. Chicago started on the road with a couple of chances on the power play, but found themselves stymied by the Admirals’ penalty killers, namely Cooley with a couple of athletic saves on Joey Keane and CJ Smith. An energetic shift by the Wolves’ fourth line hemmed Milwaukee in their own zone, and that sustained pressure by the bottom six would give room for the Wolves’ top line. At the end of the first period, Ryan Suzuki would grab the puck in the corner and feed David Cotton in the slot, and last year’s leading goal scorer for Chicago sniped home his first for the 1-0 lead.

Take a look at the slick feed from Ryan Suzuki and the finish from David Cotton https://t.co/Vc4MwUJQpD

On the other end of the ice, Makiniemi was tested by hard shots from Milwaukee’s snipers, and despite some shaky rebound control, was able to hold the lead for Chicago into the middle frame. The Admirals started the second with an early power play and again tested Makiniemi with quality shots and bodies in front. Still, the young Finnish netminder stayed steady in position and shut the door on the chances peppered his way.

With 10 minutes to go, the Wolves were given another power-play, but it was the Admirals with the quality chances on the kill – namely former Wolf Anthony Richard with back-to-back breakaway chances as he had done so often for Chicago last season. Despite Richard’s explosive speed getting him in the clear, Makiniemi blocked both opportunities to preserve the lead. Cooley would match him save for save with captain Andrew Poturalski setting up several chances on odd-man rushes only to be denied by acrobatic saves from the Admirals netminder.

Those saves wouldn’t be forgotten as Poturalski – dangerous all night – and the Wolves’ top line would extend the lead as the Wolves’ captain fed a slick pass from behind the net to an open Jalen Chatfield, who blasted home his first of the season for a crucial two-goal lead late into the second period. The last five minutes of the period were spent almost exclusively in Milwaukee’s zone as Chicago pressed the attack, and Cooley had to come up with some more timely saves to keep the Admirals in the game and catch their breath into the second intermission.

Milwaukee, however, would not go away despite a second period where they were soundly outplayed. Richard again had another great look from the side of the net but was denied by a sprawling Makiniemi stretching out to make the glove save that was easily his most impressive of the evening.

A few minutes later, the Wolves were back to work on the man advantage – unlike their earlier opportunities, they would cash in early. An offensive zone faceoff win would lead to a quick set passing play off the draw finished off by Smith for a 3-0 lead. The goal featured a primary assist by Jack Drury – his first AHL point since coming over from Sweden over in the offseason. The Wolves especially dominated in faceoffs in the evening, which contributed to their heavy advantage in puck possession time in this game.

Again – Milwaukee would not go away. With three minutes left and two power-play opportunities, the Admirals finally solved Makiniemi with Cooley out of the net. Egor Afanasyev ruined the shutout bid, and Matt Tennyson brought the Admirals within one goal with 11 seconds left, but it was too little too late for the Admirals as their final rush was driven out of the zone, and the Wolves skated out of the arena with their first win of the season, having to turn quickly around back to Rosemont to rematch these same Admirals the next night.

For the Wolves, Alex Lyon would get his second start at home of the season, while Cooley would again tend the night for the Admirals. The script from Friday would carry over into Saturday with the Wolves taking control of the puck early and often, peppering the Admirals’ netminder with heavy chances that had to be fought off. The fireworks started early on in this one, with Stefan Noesen and Mitch McLain getting in each other’s faces. The pushing and shoving earned each player two minutes. While the teams would trade chances throughout, the Wolves would pour it in late in the third.

First, Chicago native David Gust scoring from a tight angle fooled Cooley up high at the 16:46 mark. Not to be outdone, just a minute later, Noesen jammed the puck home on a rebound with an Admiral defender draped on his back – causing some more shoving and words between the two teams. Less than thirty seconds later, Maxim Letunov and the energetic fourth-line added one more for good measure, and in the blink of an eye, the Wolves were skating into the first intermission with a 3-0 lead.

The Admirals continued their sloppy play into the second, yielding turnovers that resulted in several quality Wolves chances, including two shots that beat Cooley but rang off the bar and out. Their frustrations would soon boil over, and as Milwaukee took those frustrations out on the Wolves, the power plays mounted for Chicago. Following Poturalski’s power-play goal less than five minutes in that extended the Wolves’ lead to 4-0, Cooley was pulled for Parker Gahagen.

YA LOVE TO SEE IT. pic.twitter.com/5GElynMscd

Despite three more minor penalties, the Admirals were able to skate out of the second period without any more damage.

The third, however, wouldn’t be much more kind for Milwaukee. Barely over a minute in, a scramble around Gahagen created an opportunity for a bouncing puck that Stelio Matheos cleaned up for a 5-0 lead. Smith got in on the fun with his third goal in as many games, pacing the Wolves early on in the season. With just under two minutes left, Milwaukee’s Joseph Labate broke up Lyon’s shutout bid, but again it was much too little, much too late for the Admirals and the Wolves cleaned up their first win at home with a 6-1 drumming of many of their former teammates.

There were few moments in this home-and-home series where Chicago didn’t look to be in complete control against a very good Milwaukee team. Following some hiccups of defensive responsibility against Rockford in their home opener, the Wolves had a whole week of practice to get ready for Milwaukee. Coach Ryan Warsofsky challenged his players to be better, and they responded.

“I think when we defend the right way and play the right way away from the puck we’ll get chances to play offense. We have some skilled players who can score, so if we buy into the way we need to play, the offense will come and we saw that [Saturday night],” Warsofsky said.

This weekend, the Wolves looked every bit of the Calder Cup contender that many had picked them to be. The hiccups of opening night look far in the rear view mirror. Dominant offensive work, top edge goaltending, and most of all, the effort to come in and compete in every shift… It’s one thing to have the talent but what Warsofsky has driven into these players is the will to outwork their opponents, which makes for a very dangerous team when they’re in their groove.

The Wolves have a few games on the road next week, driving up to Grand Rapids for a Wednesday night game before turning around and heading back to Milwaukee on Friday. On Halloween night, they finish up the week with another road game in Grand Rapids for some trick-or-treating with the Griffins.