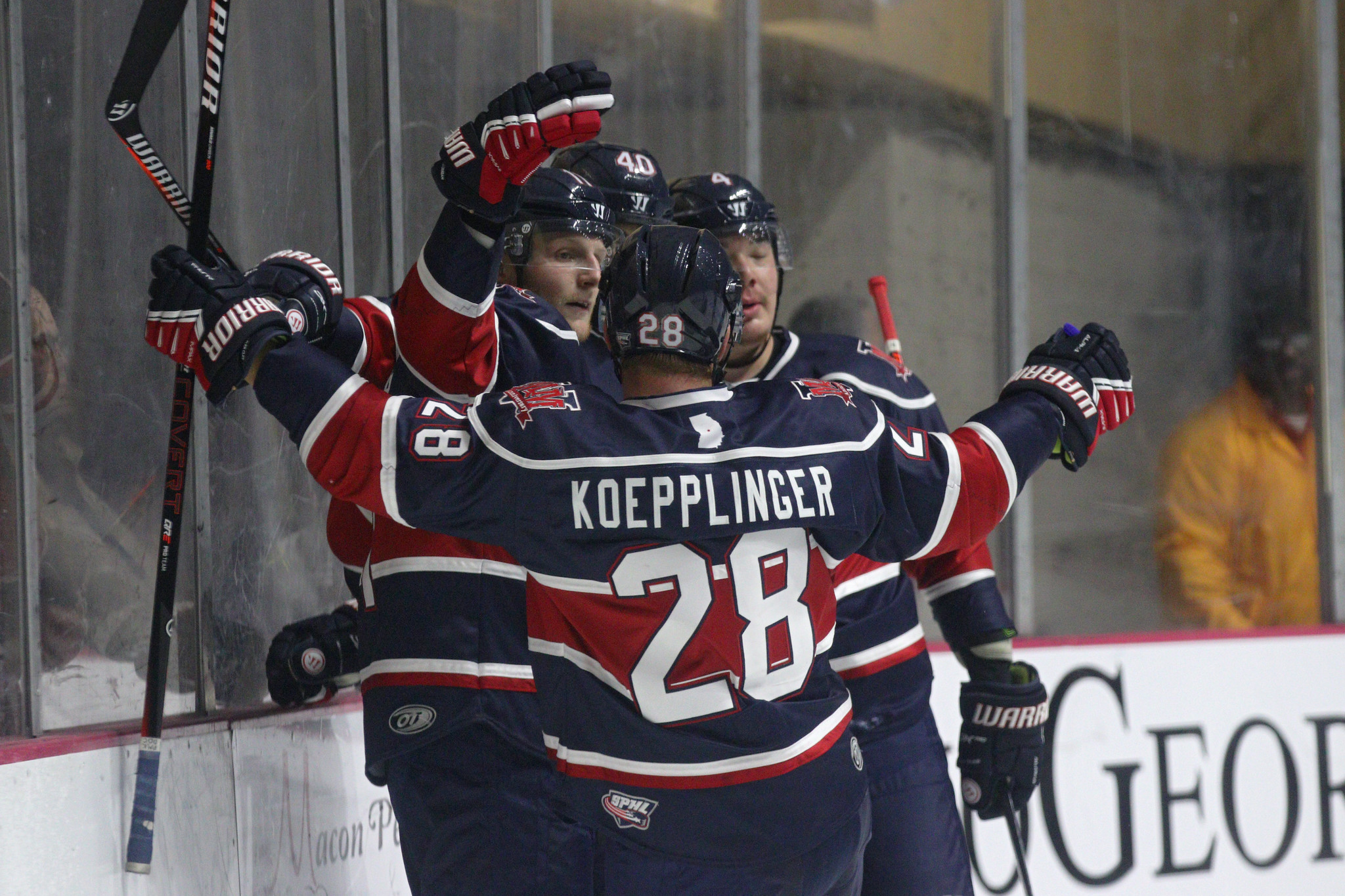 The Macon Mayhem continues to assert itself within the top of the SPHL thanks to stout efforts on both ends of the ice.

MACON, Ga. – Thanks to strong play in both goal and on the defensive end of the ice, along with a mixture of forwards stepping up on the offensive end, the Macon Mayhem continues to assert itself within the top of the SPHL.
By way of once again salvaging a point on Friday against Roanoke and taking home a win on Saturday against Birmingham, Macon has now earned a point in all four of its contests this season. The Mayhem will next play on the road for the first time this season, heading to Peoria for a pair of games next weekend.
Macon (2-0-2), with six points, is one point behind Fayetteville for first place and is one of four teams in the league to have played a total of four games this year at this point.
Here are five takeaways from the weekend…

When Jake Trask and John Siemer departed, it was very apparent that a key for the Mayhem would be finding players to step up and help carry the scoring load. Early on, Marcus Ortiz is taking on that role. His five points and four goals lead Macon through four games, and three of the scores came this past weekend. His backdoor goal from a Jimmy Soper pass put the Mayhem in front 4:37 into the game on Saturday against Birmingham, and Macon did not look back.

Daniel Perez, who came to Macon last week after a short stint with Greenville in the ECHL, is gelling nicely with his new teammates, having a goal and assist in both of the weekend’s games. Scoring punch is never a bad thing, and Perez has brought more of it to Macon in a short time.

After Kevin Entmaa got both starts on opening weekend, Macon head coach Leo Thomas opted to give both goals a chance to show what they can do. Alex Fotinos got the nod on Friday against Roanoke, stopping 24 of 27 shots in the shootout loss while Entmaa yielded just one goal on Saturday against the Bulls.

Macon’s special teams were their undoing on Friday, giving up one goal on the powerplay and another shorthanded. Those issues were rectified a night later with the Mayhem turning away the Bulls on all five power-play chances.

Stephen Pierog’s return to Macon may not have resulted in a goal scored by Pierog through four games, but his play has impacted the Mayhem’s ability to move the puck in a significant way as he has a team-best five assists

“That kind of effort, if we play like that, we’ll win a lot of games. That’s a good team we beat over there (on Saturday). Overall, it was a good weekend. Every game, we’ve gotten better. We didn’t get the start we wanted on Friday, but the way the team has responded is good to see. Overall, I’m pretty happy with the effort.”

“He’s probably one of the first guys out there each day at practice and it’s showing in the game.”

Thomas on Perez’s impact so far:

“He was definitely somebody I had my eye on if he became available from the (ECHL). Just to see him get his feet under him…he’s smart and big and has fit in really well and is a huge jolt to our lineup.”

“All of our goals have really been the result of a five-man effort – getting the puck out of our zone, down the ice and into theirs and just working hard. We have a great team that pushes each other in practice and it shows on the ice.”

Three Stars of the Weekend

Marcus Ortiz – Three combined goals in two games
Daniel Perez – Registered a goal and assist on both Friday and Saturday
Stathis Soumelidis – His goal in the closing seconds on Friday forced overtime, allowing Macon to gain at least a point.

Macon plays at Peoria on Friday and Saturday before hosting the Rivermen the following weekend.