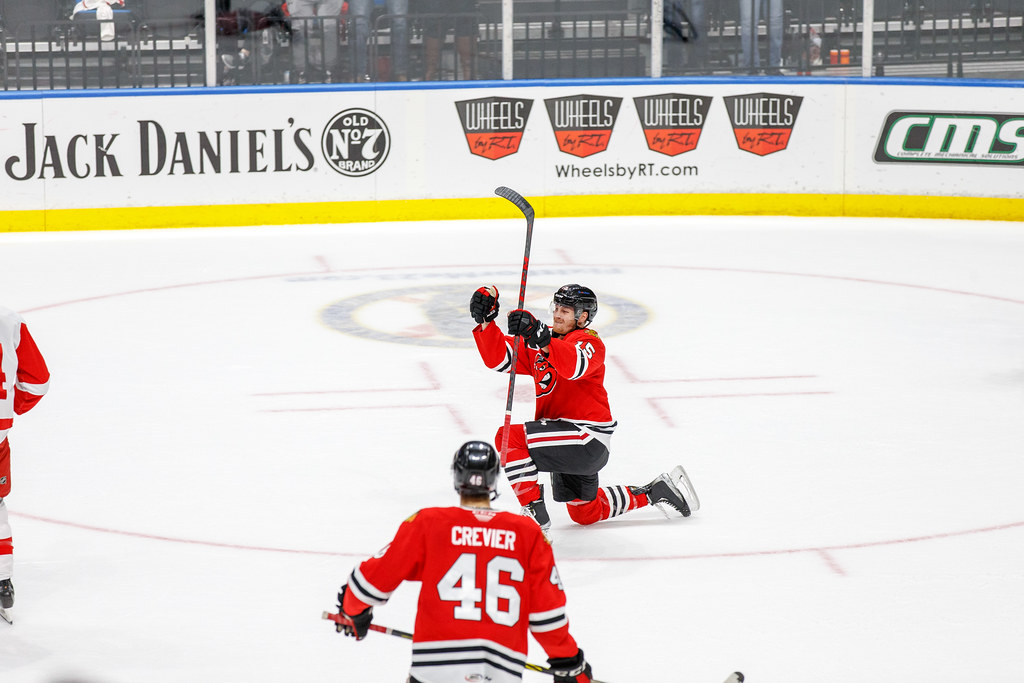 ROCKFORD, Ill. – Goalie Mitchell Weeks probably did not expect to be anchoring the net for the Rockford IceHogs at this stage of the season. A week ago, he was making his way through the early stages of his rookie season with the ECHL’s Indy Fuel. His first outing with Rockford after being recalled Monday saw Weeks give up five goals in a loss to Milwaukee.

Saturday night, Weeks gave up an early goal, then settled down, posting a 25-save gem against the visiting Grand Rapids Griffins.

The effort allowed Rockford’s quick-strike offense to eventually take control of the Central Division matchup. A big second period proved to be the difference as the IceHogs beat Grand Rapids 4-1 at the BMO Center.

“It felt great,” Weeks told IceHogs reporter Katie Florio after being named the game’s First Star. “You always want to do it in the first game you play, but it feels almost better now to do it in my second game.”

Grand Rapids took an early lead on a Cross Hanas goal three minutes into the contest. In contrast to Wednesday’s loss, Weeks got stingy in the crease from that point on.

“It was great for him and I thought he played really, really well, too,” said Hogs coach Anders Sorensen at the postgame presser. “His response from last game was really good.”

Rockford went into the first intermission tied at one on the strength of a Carson Gicewicz goal late in the period, set up by a beautiful backhand pass by line-mate Bobby Lynch.

Rockford broke the game open in a four-minute span late in the second period. With Pontus Andreasson and Drew Worrad in the penalty box with infractions four seconds apart, the Hogs’ power play got to work.

Lukas Reichel came around the boards with the puck, drove down the slot, and beat Griffins goalie Jussi Olkinuora to the twine at the 13:02 mark. Still up a man after the eventual game-winner, Luke Philp lit the lamp just 1:15 later, giving the IceHogs a 3-1 advantage. At 17:13 of the second, Brett Seney completed a power move to the front of the net, scoring his fifth goal of the season for a 4-1 Rockford lead.

“I thought we played pretty good in the first two (periods),” said Sorensen. “It was kind of a see-saw game. That 1-1 goal was big for us, and obviously it was nice to see the special teams play as well as they did today.”

Grand Rapids had three power-play chances in the third period to try and get back in the game. However, Weeks and the IceHogs penalty kill unit stopped them cold. For the evening, Rockford held the Griffins without a goal in six attempts with the man advantage.

Injuries to goalies in Rockford as well as NHL parent club Chicago have put the Hogs’ net in the hands of Weeks and PTO signing Owen Savory.  The prospect of returning players may put Weeks back with the Fuel soon. For the moment, he’s focused on his next start, wherever that may be.

“It’s my first year pro, and I guess that’s the way it works,” Weeks said. “You could be playing for any team at any time, so I’m staying ready. It sucks to see guys get hurt and stuff, but I’ve just got to stay ready for whatever can happen.”

Rockford, who moves to 4-4 on the season, tries to end its seven-game homestand with a win against visiting Iowa this afternoon. The Griffins (5-5) next play in Cleveland on Wednesday.