ALLEN, Texas – The Allen Americans return to the ECHL postseason after a two-plus year layoff and enter the playoffs as one of the league’s hottest teams, winning six straight to finish the regular season. Utah has been riding the momentum of winning a huge four-game set against Rapid City early in May to their 13th Kelly Cup Playoff berth in their 16-year ECHL run.

Both teams feature dynamic rookies, solid lineups, and great goaltending. Their prior matchups this season have been intense and fast-paced, and that intensity should only ramp up in this playoff series.

Allen won the season series, 10-6-1-1. However, the Utah Grizzlies won six of the last eight meetings between the two clubs, including three straight from May 21-23.

Americans defenseman Les Lancaster led the Americans in points (14) and assists (13), with Corey Mackin and Jesse Mychan each lighting the lamp a half-dozen times.

For Utah, Trey Bradley, and likely ECHL Rookie of the Year, Matthew Boucher each had 11 points against Allen. Cedric Pare scored eight of his 17 goals against the Americans in the regular season. 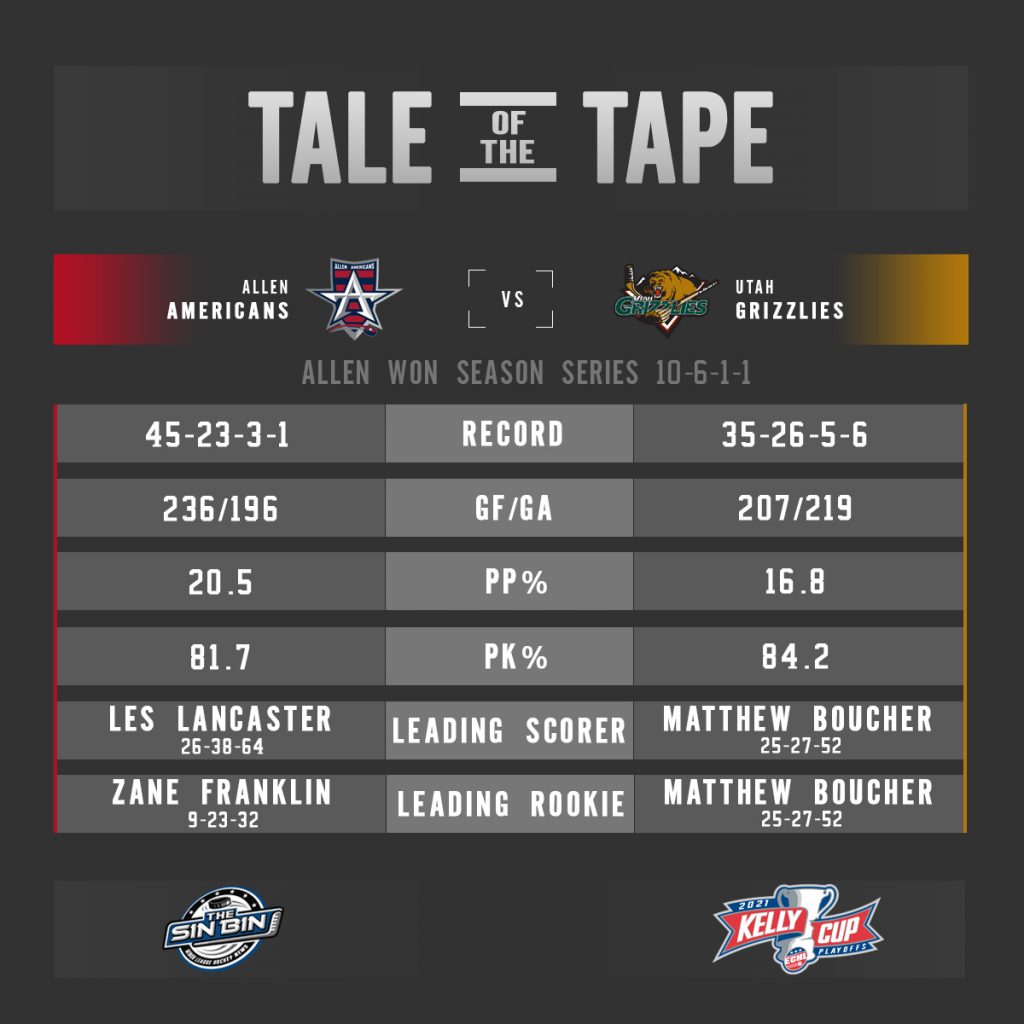 Allen does its best work when they can dictate the terms of the game. Scoring first has been huge for this club this season, going 33-8-2 when lighting the lamp first, and that will need to continue for the Americans in this series. Additionally, the Americans will need to get additional offense from their forward group outside of Corey Mackin and Spencer Asuchak. Lancaster and Matt Register are two of the best playmakers in this league on the blueline, it is a mystery why there is a lack of offensive output from the depth forwards.

Utah has been struggling in net for parts of this season, but it appears Tim Branham and company may have figured it out. Parker Gahagen returned from Colorado after the AHL season ended and went on a heater…going 9-3-0-0 with a pair of shutouts. Against Allen, he went 2-1-0-0. There are very few teams who can out grit Allen, but if the Grizzlies can be the better offensive team and Gahagen continues his torrid pace, the Grizzlies could oust the West Champs.