WICHITA, Kan. – They’ve only met three times in the regular season, but the Wichita Thunder and Fort Wayne Komets already have a salty rivalry. A pregame scuffle, followed by two standoffs to leave the ice overshadowed some hard-nosed, competitive hockey between two good teams.

Wichita enters the playoffs with their best record in the ECHL era, but fell on hard times in their last ten games of the regular season, winning just four times. Possible ECHL MVP Anthony Beauregard and Bobby McMann have been out with injuries, while head coach Bruce Ramsay has been tinkering with the lineups to see what combos would work for the playoffs. Ramsay returns to playoff hockey for the first time since helping the Grand Rapids Griffins to the Calder Cup in 2017.

Fort Wayne comes into the playoffs a little banged up, with Shawn Szydlowski having a hurt hand, and netminder Robbie Beydoun out with an MCL sprain suffered in the season-ending series in Utah. Like the Thunder, the Komets have scuffled down the stretch, winning four times in their final ten games. Komets’ bench boss, and son of Bruce Boudreau, Ben Boudreau, will be making his Kelly Cup Playoff debut behind the bench.

Wichita won the season series 2-1-0-0, with all of the games being played in Fort Wayne.

For the Thunder, rookie forward Brayden Watts led the team with four points (2G, 2A) in three games, while Steven Johnson had a trio of assists. Netminder Evan Buitenhuis went 1-1-0-0 in two appearances, with a 1.51 goals against average and a .947 save percentage.

On the Fort Wayne side, second-year player Alan Lyszczarczyk led the Komets with three assists and points, while Marc-Olivier Roy lit the lamp twice. Dylan Ferguson was really sharp in net, scoring the Komets’ only win of the regular-season series, stopping 20 of 21 shots he faced. 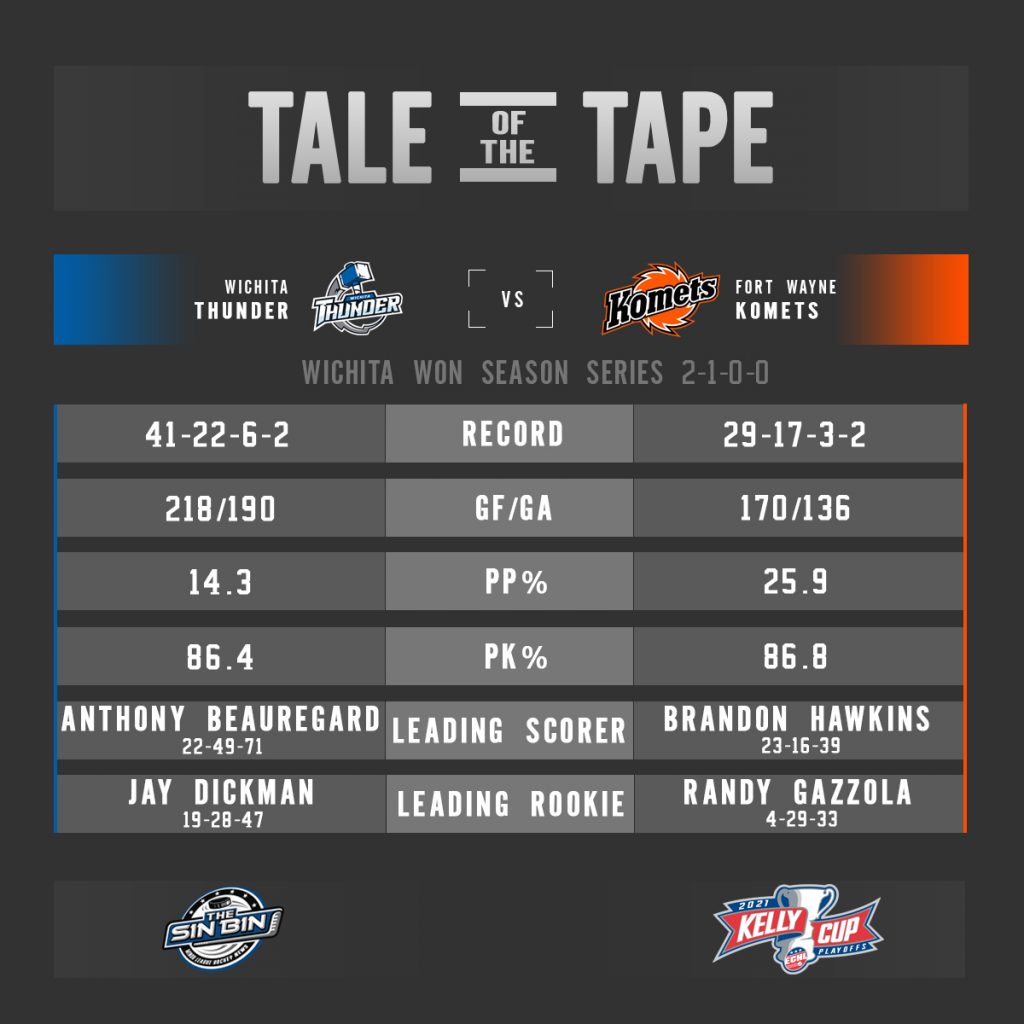 In the last five games of the regular season, it seemed that the Thunder desperately missed two straws who stir the collective drink; Beauregard and McMann. With them in the lineup, this Thunder offense is much deeper and presents many matchup problems for the opposition. Compounding things, the defense has been slightly laxed for Wichita, making many mistakes they did not make earlier in the season.

For Wichita to win this series, Beauregard will need to re-assert himself and become a playmaker in the Thunder lineup. If McMann can go, he will help anchor the second line with Matteo Gennaro, a line that had good success prior to his injury. The defensive mistakes the Thunder made have to go away.

Finally, the Thunder cannot allow the Fort Wayne power play to go to work. It has to be a situation where the Thunder tries to take someone with them to the box.

The Komets can win this series by dictating the pace of play once they score the first goal. The Komets only have three overtime or shootout losses this season (none in regulation) when leading after the first or second periods. Most ECHL teams are good when playing with the lead, however, there may be none better than the Komets.

A second key for the Komets would be for them to remain strong on the power play and make the inexperienced Thunder be the team to take the costly penalties.