What Is and What Could Have Been, Award Winners and More

ALLEN, Texas – It seems to me like the ECHL season was canceled a long time ago but the fact is it has only been five days and there are still well over 200 days before hockey returns to Allen. Most of the players have already headed home. With the talk of restrictions and self-quarantine for people going into Canada, the players from there were in a hurry to get back home. A handful of players (Asuchak, VanWormer, Durocher, Brittain) are staying in Texas for a variety of reasons. Stepan Falkovsky is about to leave on the 5600-mile trip heading home to Belarus.
– I have had more than a few fans contact me about why the Americans or the ECHL didn’t do more to help the players when the season was canceled. Many expressed their desire to contribute to a fund to help. The short answer is the ECHL and PHPA (Professional Hockey Players Association) would have to come to an agreement to extend pay and that didn’t happen. As for the Americans being involved in any kind of fundraising or distribution of funds to players that is illegal because it violates the salary cap. There is nothing stopping fans from contacting players directly to offer help but that is complicated because most of the players are already gone.
– When you think of the potential money lost by Allen players it could easily amount to $10,000 – $15,000. If Allen would have won the Kelly Cup it would have meant 14 more weeks of salary, three more months of housing and playoff money.
– While there is no way to know how Allen would have done in the playoffs there is little doubt they were poised for putting together a great roster for the postseason. Gabe Gagne, Zach Sawchenko, Jack Sadek and Jake Doty would have likely been back for the start of the playoffs. There was a possibility Les Lancaster, Matt Register, Mitch McLain, and Turner Ottenbreit could have been back at some point. Coach Martinson was also working on another player getting assigned to Allen that would have been huge.
– The job Steve Martinson did this season should make him a favorite for ECHL coach of the year if they hand out that award. Allen was on pace to finish the regular season with 102 points after totaling just 56 points last season. A 46 point turnaround would have been one of the biggest in ECHL history.
– It is worth noting the number of players that were expected to be in Allen that were not. Teams always lose players to the AHL but this season has seen more than anyone expected when the season began. Here is a list of players coach Martinson signed for Allen that has spent the majority of the season in the AHL. Included in the list below are the games each player played in Allen.
Josh Atkinson – 0 games
Matt Register – 3 games
Jake Doty – 3 games
Turner Ottenbreit – 17 games
Les Lancaster – 34 games
Gabe Gagne – 36 games
– When I was talking to coach Martinson yesterday he mentioned it has been difficult for him since the workout facility he uses almost daily has shut down. He is trying to find someone who has free weights he could borrow. If you can help him out send him an email at [email protected]
– The Americans don’t hand out awards each season but here is my opinion on award winners.
Tyler Sheehy – MVP (70 points)
Tyler Sheehy – Rookie of the Year
Alex Breton – Defenseman of the Year (55 points)
Jack Sadek – Plus Performer of the Year (+25)
Josh Lammon – Best Defensive Forward
Jared VanWormer – Charlie Hustle Award
Zach Sawchenko – Goalie of the Year (.930 save percentage)
– There is an auction currently going on (ends on Tuesday) that includes the Allen Americans military jersey and the game-worn red jerseys. If you are not familiar with the auction you have to download the app (LiveSource) and select “Allen, TX” 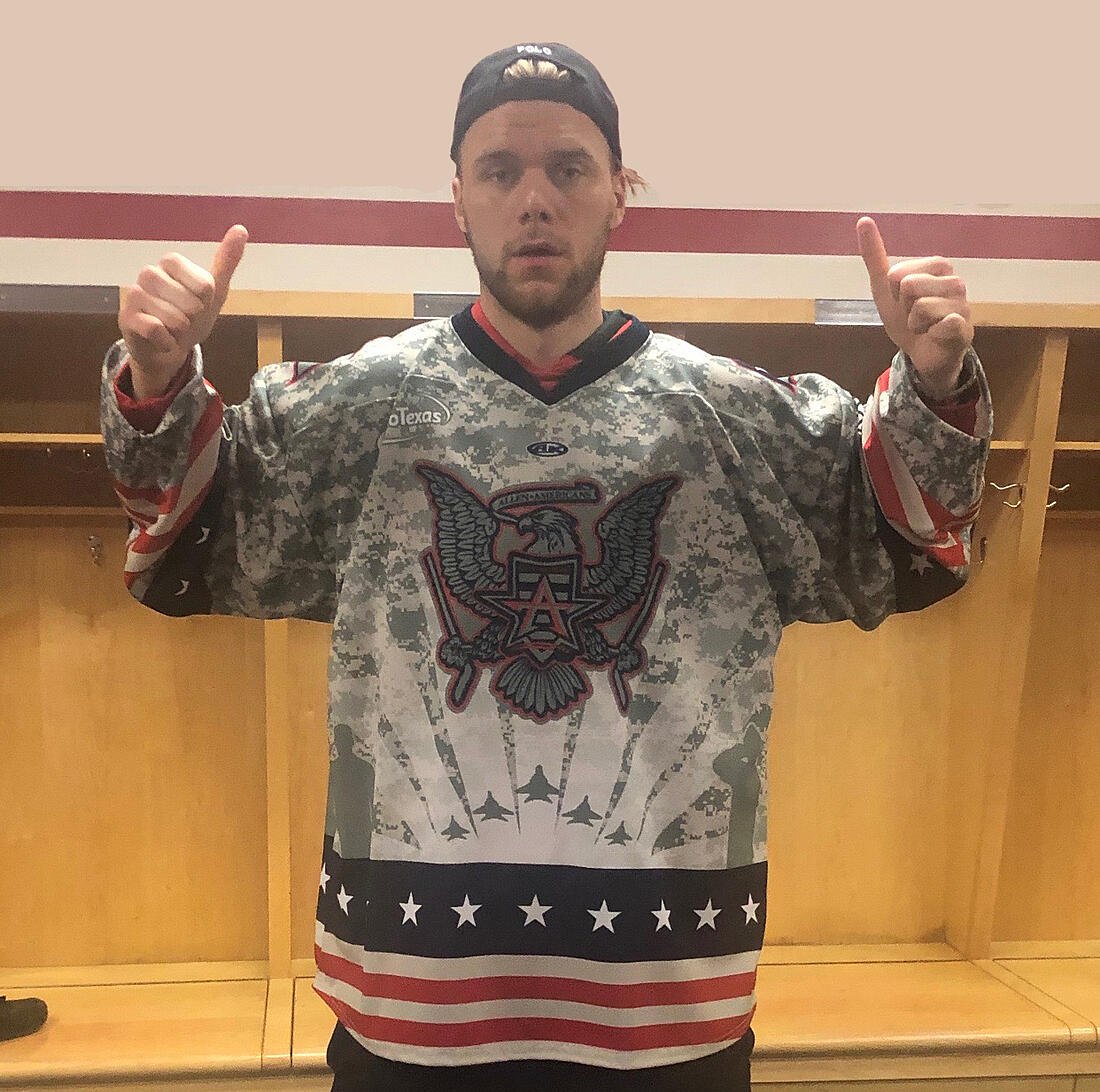 – Alex Guptill and Olivier Archambault passed the 260 professional games played this season and will be veterans at the start of the 2020-21 season.