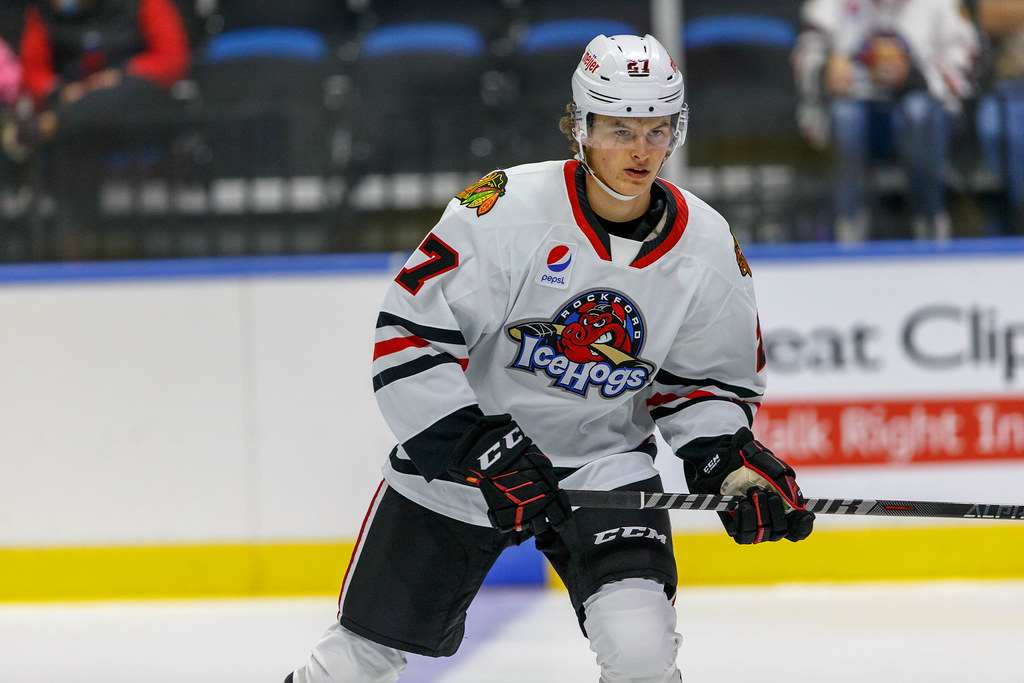 What the Rockford IceHogs Can Be Thankful For

The play of rookie Lukas Reichel has been an early highlight of Rockford's 2021-22 season. (Photo by Todd Reicher/Rockford IceHogs)

What the Rockford IceHogs Can Be Thankful For

ROCKFORD, Ill. – The Rockford IceHogs can enjoy a Thanksgiving feast before facing down two division opponents in their first three-in-three weekend of the 2021-22 campaign.

Rockford is 5-6-1 and in sixth place in the AHL’s Central Division. However, they do have some things to be thankful for as they fill their plates Thursday. Here are five.

For the first time this season, Rockford has won consecutive games. Both came against the Chicago Wolves this past weekend. The Hogs trailed by two goals in both games, yet kept at it and prevailed 6-3 Friday night in Rockford before claiming a 3-2 shootout win at Allstate Arena.

The Hogs will be going for three in a row against Milwaukee Friday night. That hasn’t happened since Rockford reeled off three straight wins February 12-15, 2020.

Reichel is leading the team in points (twelve) and goals (seven) though twelve games. So far, the rookie has handled the physical nature of the AHL game and displayed his skill on a nightly basis. Reichel is tied for seventh among rookies in scoring and tied for third in goals scored.

Another rookie that is making an impact is goalie Arvid Soderblom. His 3.37 goals against average doesn’t tell the whole story; Soderblom has shown a lot of poise in net in the face of an average of 40 shots per game. The 22-year-old is 3-3 and has a .916 save percentage. The organization seems committed to giving him 35-40 starts this season.

Connolly had his six-game point streak broken in Chicago Saturday night, but the long-time NHL veteran has been a big plus for an IceHogs lineup that is thin in experience. In twelve games, he has five goals and six helpers.

Connolly was probably hoping to be playing with the Blackhawks this season. Despite going through waivers and being assigned to Rockford, he has shown a lot of professionalism by being a leader on the ice. In particular, his mentoring of young forwards like Reichel has been lauded by the coaching staff.

Slavin, Chicago’s seventh-round pick in the 2018 NHL Draft, has continued to impress early in his pro career. The lanky 6’3″ forward is contributing at both ends of the ice.

After signing mid-season with the Blackhawks, Slavin had seven points (3 G, 4 A) in a 15-game trial run with Rockford last season. This fall, he leads the team in skater rating (plus-six) and has eight points (4 G, 4 A) in 12 games.

Slavin has both of Rockford’s shorthanded goals this season; his shorty Friday night was instrumental in the Hogs comeback win over Chicago.

#5-Three Games With The Milwaukee Admirals

Most seasons, the prospect of facing the Admirals would be lamentable. Right now, Milwaukee is struggling. They’ve lost seven of its last ten games and are below the IceHogs in last place in the Central Division. Three of Rockford’s next four games are against the Admirals. The IceHogs host Milwaukee on November 26 and 28, then visit UW Panther Arena for the first time this season on December 1.

Rockford has games in hand on every team in the division at the moment. If they can open their season series with the Admirals with a couple of wins, it could move them up a couple of notches in the standings.

The IceHogs drop the puck with Milwaukee at the BMO Harris Bank Center Friday night at 7:00 p.m. Rockford travels to Chicago to play the Wolves Saturday night before finishing the weekend at home with the Admirals Sunday afternoon.