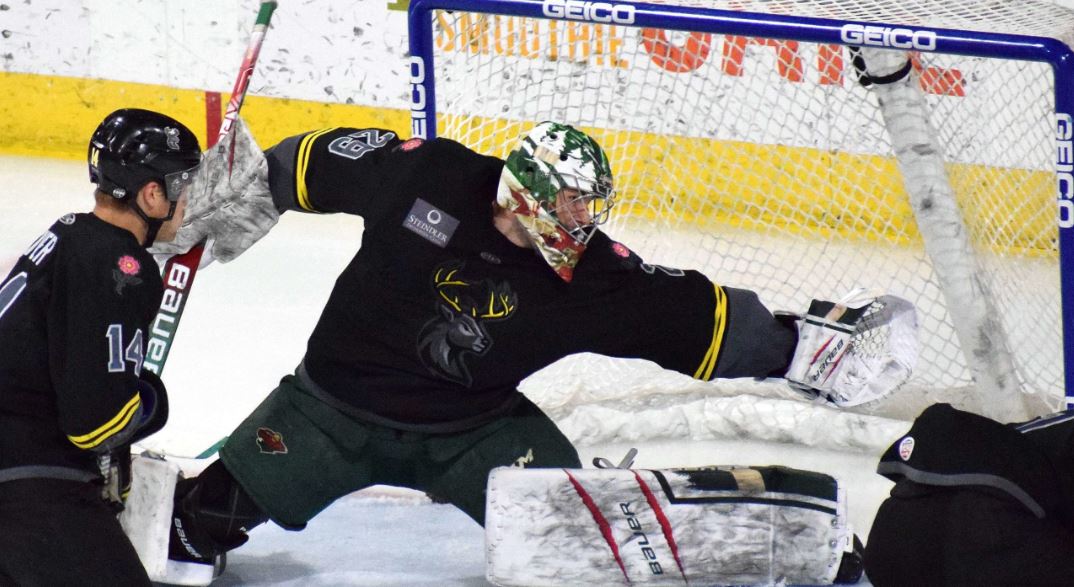 ALLEN, TX – Clinging to the final playoff spot in the Mountain Division, the Allen Americans welcomed the Iowa Heartlanders on Wednesday, looking to solidify their playoff position. However, four second-period goals by Iowa helped to pour water on those playoff hopes as the Heartlanders came away with a 5-1 victory. Zach White led the way with two goals, and Hunter Jones received an incredible defensive effort in front of him, facing just 17 shots.

Allen took the lead for 4:24 into the contest when the red-hot Branden Trook scored his 25th goal of the season. The Americans were pressuring inside the Iowa zone, able to maintain control of the puck. Spencer Asuchak passed the puck to Troock, who swept across the crease, firing a shot that Jones saved, but Troock gained control of the rebound, putting it between the legs of the Iowa netminder for his fifth goal in his last three games.

From there on, it was all Iowa Heartlanders. The team outshot Allen 15-7 in the first frame, and White tied the score a little less than eight minutes after the Troock goal. Ryan Kuffner passed the puck to White just below the right face-off circle. He lifted a bad angle shot over the shoulder of Luke Perissini on the short side for his 17th tally of the year.

The score remained tied through the end of the first frame, but Iowa exploded for four goals in the second period to take a commanding lead. The first came at 6:18 when Jake Smith made a great cross-ice feed to Ben Sokay at the back door. Sokay lifted a wrist shot into the top corner for his 12th tally of the year to give Iowa the lead for good.

Just after the eight-minute mark, Luke Nogard extended the lead to two with his eighth goal of the year. Nogard led a 3-on-1 rushed through the neutral zone and into the Allen end. As he approached the Americans’ netminder, Nogard opted to take the shot, firing a laser that beat Peressini to make it 3-1. Kris Bennett earned the assist on the play, his second of the contest.

At 10:59, it was White scoring his second goal of the game. Kuffner moved toward the goal line before leaving a dropped pass for White just inside the left face-off circle. He fired a shot that went just inside the far post for No. 18 on the season, making it 4-1.

Smith closed out the scoring with his 24th goal of the year at the 12:20 mark. Riese Zmolek made a fantastic feed out of his own zone and onto the stick of Sokay just before he entered the Americans’ zone. Sokay moved down toward the Allen net, waiting for Smith to move down the slot before feeding him the puck. Smith beat Perissini with a wrist shot to make it 5-1. That would be it for the Allen netminder, who was pulled for the second straight contest.

While the Heartlanders were blitzing Perissini, they played exceptional defense in front of Jones. The team allowed seven shots in the first and five in both the second and third periods. Jones helped himself as well, as he faced just two rebound opportunities in the contest, giving Allen no opportunity to get themselves back into the contest.

Jones (5-10-3) earned his first victory since February 5. Sokay and Smith each finished with a goal and an assist. Francis Marotte stopped all 15 shots he faced in relief of Peressini.

These teams will square off again on Friday. The puck drops at 7:00.