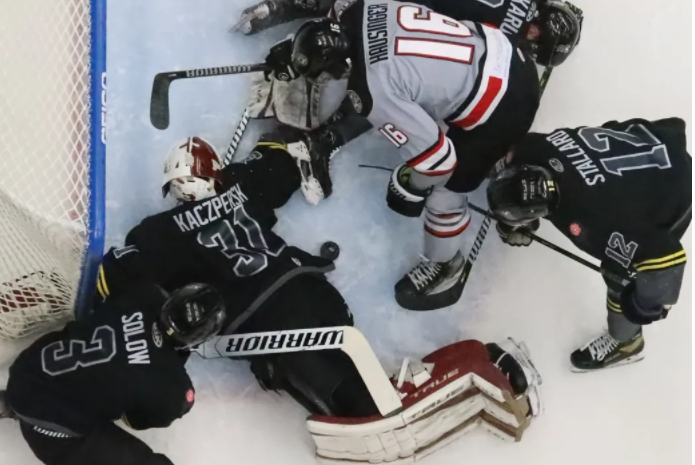 WHEELING, W.Va. – Zach White scored the game-winning goal 3:42 in the second period and Corbin Kaczperski made it stand as the Iowa Heartlanders defeated the Wheeling Nailers, 2-1. White finished with two points, including his fourth goal of the season. The Heartlanders are now 5-1-2 in their last eight games, moving the team within five games of .500.

Iowa jumped out to a 1-0 lead at 7:38 of the first period, using the power-play to get the early advantage. With Iowa on a 5-on-3 advantage, White moved the puck across the slot to Kaid Oliver, who gained control before moving to his backhand. Oliver then lifted the puck past the blocker of Stefano Lekkas for his sixth goal of the season.

Wheeling evened the score a little over three minutes later, using the man advantage to their advantage. Niclas Almari moved the puck along the boards to Justin Almeida, who moved in just above the left face-off circle before firing a wrist shot that beat Kaczperski to tie the score at one.

The teams were tied through the first intermission as the Nailers outshot the Heartlanders 12-7 in the first frame. Wheeling continued to put the pressure on in the second, outshooting Iowa 11-6. However, it would be the Heartlanders who would exit the second period on top by a goal.

That came courtesy of a great play by White at 3:42. The Heartlanders forward perfectly read a pass play inside the Nailers zone, intercepting the pass attempt. He then waited patiently to get Lekkas down before lifting a wrist shot by the Nailers goaltender to put his team on top by a goal.

From there it was all Kaczperski. Iowa was having very little success generating much offense, but their goaltender was dominating, stopping 11 shots in both the second and third periods. His dominant played included a stretch in the third period when the Nailers had to power-play opportunities but came away empty-handed both times. Kaczperski finished with 33 saves overall, moving his record to 3-3-1. He now has a 2.20 goals-against average and a 0.938 save percentage.

The Heartlanders return home on Wednesday where they will welcome the Indy Fuel. The puck is scheduled to drop at 7:00.