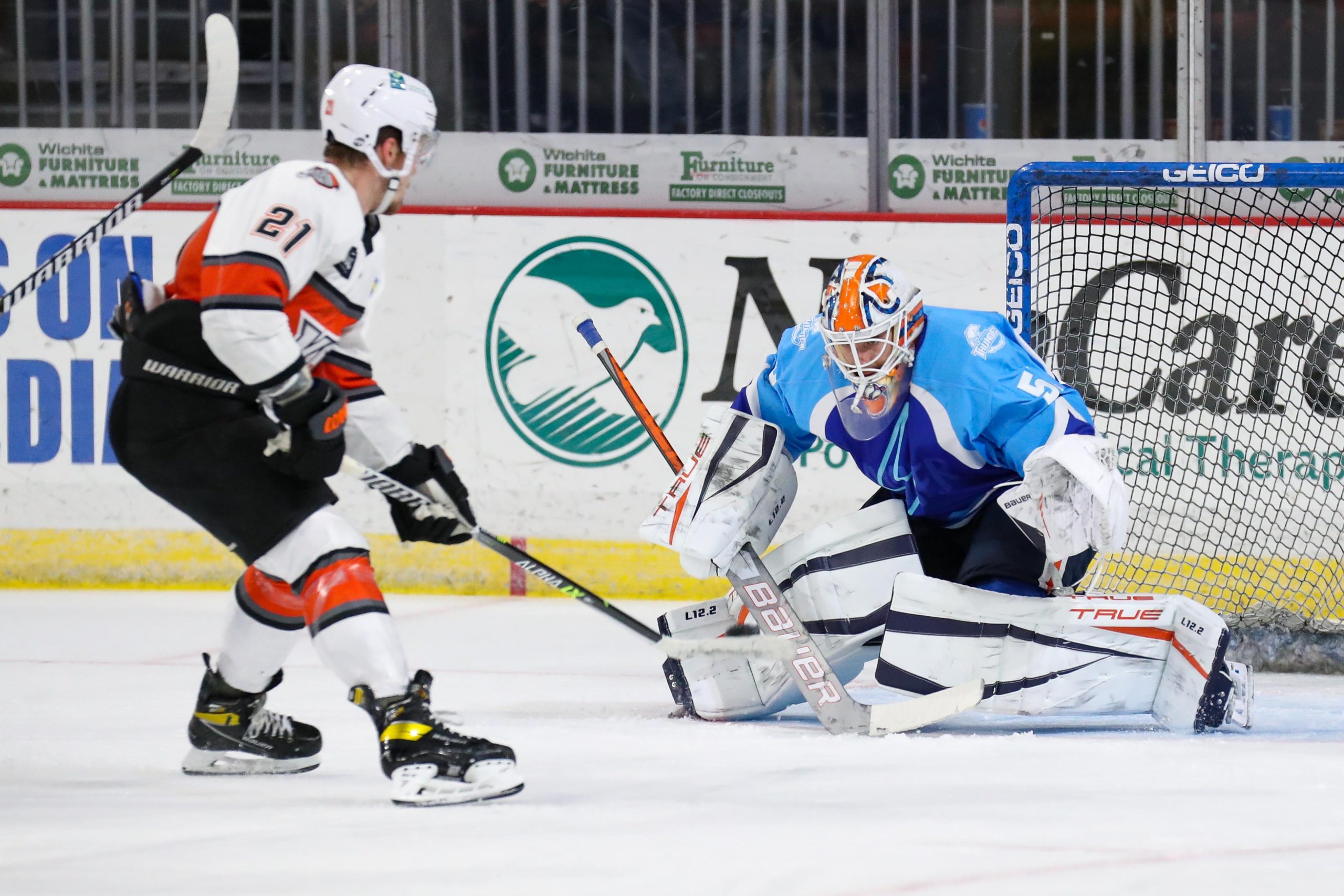 A team decimated with call-ups, injuries, and a lack of affiliate help endured a 14-game winless streak and went on a 13-game point streak in the same season

WICHITA, Kan. – It’s been a tough year for the Wichita Thunder. A team decimated with call-ups, injuries, and a lack of affiliate help endured a 14-game winless streak and went on a 13-game point streak in the same season. Until March 6, they were in a playoff spot and it appeared they would pull off the furious – and historic – comeback to make the Kelly Cup Playoffs.

But, we know what happened next.

The Thunder went on an eight-game winless streak after a nine-day layoff and it resulted in the team getting blown up and left fans looking forward to next year.

But, for one night, that didn’t matter. None of it did.

More than 10-thousand fans packed inside INTRUST Bank Arena for the final home game of the season against the Kansas City Mavericks, a rival that has become something more than just a contrived rivalry. The night before, in the Mavs home finale, the two teams got into a couple of tilts and a near line brawl in the game’s final second.

What would happen on Saturday night?

The answer…the Thunder laid a gigantic egg square on the logo.

Sure, the Thunder had some good chances right off the hop, hoping to ride the momentum generated by the crowd, but once the game settled in, it was all Mavericks.

Tommy Muck scored his fifth goal of the season, capitalizing off a bad turnover, to give the Mavericks a 1-0 lead. Roughly eight minutes later, Ben Johnson scored his 24th lamplighter of the season, putting a rebound by Olivier Rodrigue and giving KC a 2-0 lead. On Friday night, the Mavs power-play went 2-for-5 against Wichita and it stayed hot on Saturday when Loren Ulett potted a rebound by Rodrigue to extend the Mavericks’ lead to 3-0. The final goal of the period came at the 15:02 mark when defenseman Marcus Crawford capitalized on a blown defensive assignment and a nice pass to beat Rodrigue and give KC a 4-0 lead. The final three goals of the first period for Kansas City came in the span of 86 seconds.

The crowd, desperate to cheer for something other than free stuff, got a chance to late in the middle period, when Michal Stinil fired a slapshot that beat Andrew Shortridge and narrowed the lead down to 4-1 through 40 minutes.

Wichita was given a chance to get back into the contest when Crawford jumped Billy Constantinou during a stoppage in play in the middle of the third period. The Thunder were given a five-minute power play but were unable to convert on it.

Kansas City finishes the season with a record of 32-33-5-2 and sixth in the Mountain Division.

Wichita finishes the season seventh in the Mountain with a record of 27-36-9-0 and a mark of 3-12-1 since March 16. Next up comes an offseason full of questions for this team, which is in search of more depth within the organization and any kind of help from the Edmonton Oilers.