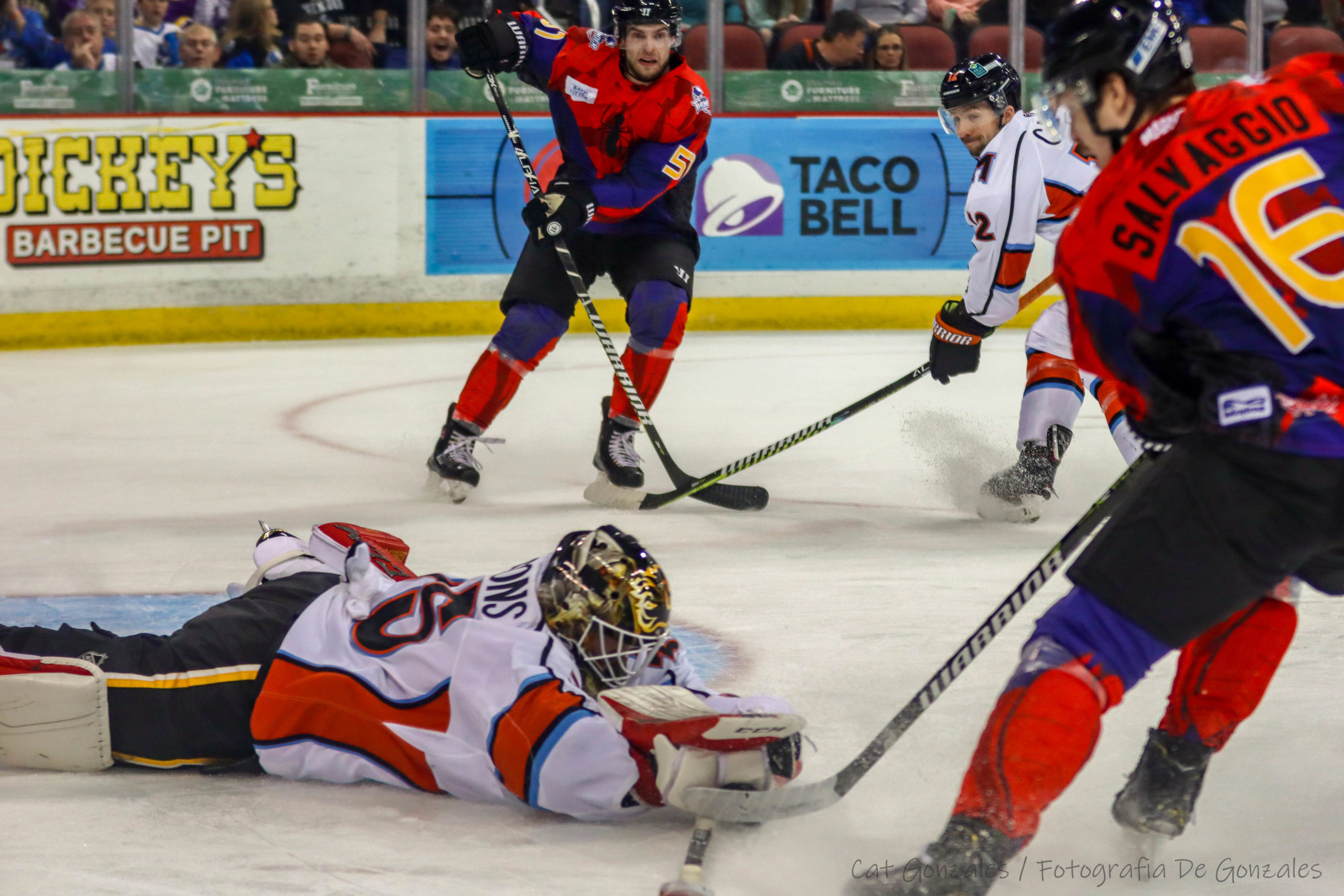 Wichita Grinds Out Point Against KC, Falls in OT

One night after a divot in the ice forced the postponement Friday night’s game, the Wichita Thunder and Kansas City Mavericks played their first full game of the weekend at INTRUST Bank Arena on Saturday.

Wichita Grinds Out Point Against KC, Falls in OT

WICHITA, Kan. –  One night after a divot in the ice forced the postponement Friday night’s game, the Wichita Thunder and Kansas City Mavericks played their first full game of the weekend at INTRUST Bank Arena on Saturday.
It was Teddy Bear toss night for the Thunder, which has been good for them in recent years, with the team winning three of the last five contests. Before the game, the team was dealt some bad news with the departure of Jack Combs, who has left the team to play in Germany. Combs finishes his stint with the Thunder by collecting 15 points (5G, 10A) in 15 games, but was a -7.
The absence of Combs meant head coach Bruce Ramsay was once again forced to shuffle his lines, and on Saturday night, it was the triumvirate of Ostap Safin/Peter Crinella/Fabrizio Ricci who appeared to have the most jump in their game. The line combined for four points on the night, including the teddy bear toss goal scored by Safin, who fired an earhole-shot past Tyler Parsons to give Wichita a 1-0 lead.

That’s a beauty breakaway for Safin to get things going in Wichita. https://t.co/JcBb5bDd4t pic.twitter.com/AhcRGJcUL3

“He came and played with enthusiasm, was moving his feet, actually had a couple good body checks. It was good to see him play the way he’s capable of because we know there’s a lot more he can show,” Thunder head coach Bruce Ramsay said of Safin’s game.

Thunder fans littered the ice with more than 16-hundred teddy bears, which is a record for the event.
Through the rest of the first period, Wichita was outshot by the Mavs 17-4, but Wichita managed to hit two separate posts in the period. The fact that Kansas City got out of the opening period down just 1-0 seemed to serve as a “win” for the road team.
Just minutes into the second period, former Thunder forward, Ryan Van Stralen scored two straight goals to give KC a 2-1 lead. The first goal by Van Stralen came off a breakaway and collision with Thunder netminder Mitch Gillam, which resulted in the Thunder netminder being down for several minutes on the ice. Thankfully, though, Gillam was able to get off the ice on his own power and watched the rest of the game from the player tunnel by the Thunder bench. In his postgame remarks, Ramsay said Gillam’s injury is not serious.
The second Van Stralen goal came shortly after Evan Weninger entered the game, and like the first, the second goal came off a breakaway where Van Stralen one-handed the puck by the Thunder netminder.
Wichita would answer in the mid-stages of the second period when Spencer Dorowicz scored his seventh goal of the season on a fluke play:

That’s a beauty breakaway for Safin to get things going in Wichita. https://t.co/JcBb5bDd4t pic.twitter.com/AhcRGJcUL3

But almost as quickly as the game was tied, it wasn’t again. And like the last two Maverick goals, this one was also scored on a breakaway. Tad Kozun was in all alone on Weninger, who made the initial stop, Kozun followed up on his rebound and put it into the net for his third of the season, and it gave KC a 3-2 lead.
From there, Kansas City clogged up the neutral zone and didn’t allow Wichita many chances, while continuing to look for the insurance goal. That fourth goal wouldn’t come for KC in regulation, however, as Beau Starrett once again came through with a clutch goal for Wichita late in the third period and with Weninger at the bench.

We are tied in Wichita with just over a minute remaining.#KCvsWIC pic.twitter.com/QvXBwDZn0s

In the overtime, the Mavericks controlled the puck and fired five shots on net. David Dziurzynski found Zach Osburn down the slot, and he beat Weninger for the game-winner.
For the first time in nine games, Wichita held the opposition off the scoreboard on the power-play. The Thunder improved to 9-6-5-0 on the season and are four points ahead of the Utah Grizzlies for the final playoff spot in the Mountain division. 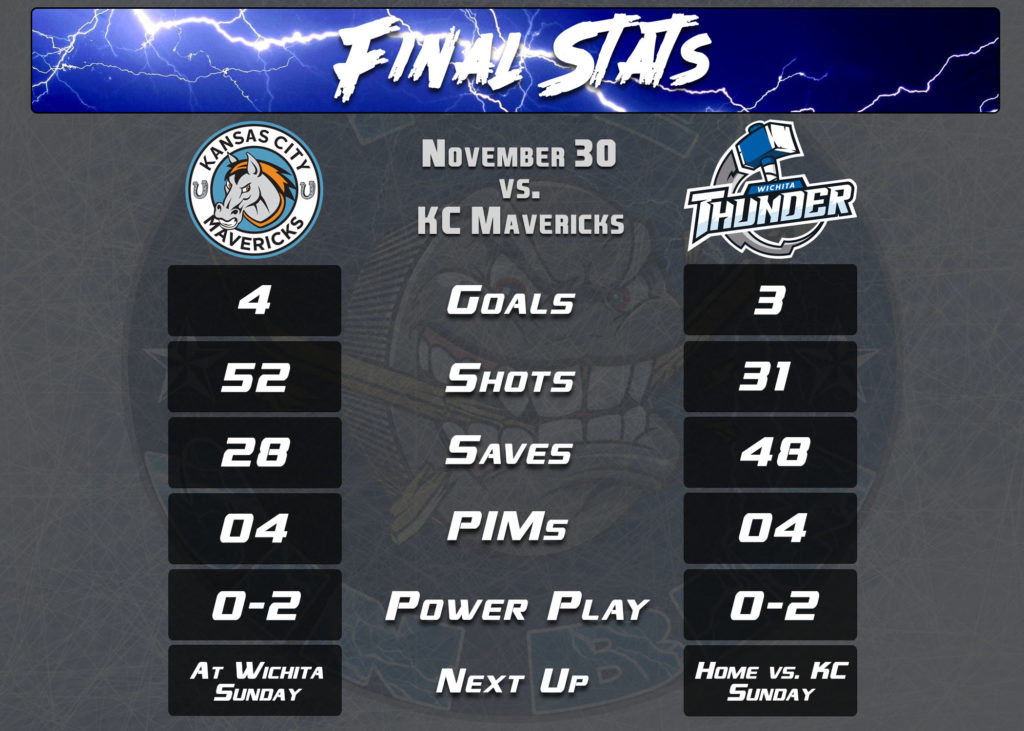 The Thunder and Mavericks will finish up the game from Friday night this afternoon at 4:05 pm. The game will resume with 13:31 remaining in the first period with a 1-1 game. Fans who were at Friday’s game can use their ticket stub to get into the game today or can exchange the tickets for another game later in the season.