The game format will be the same as the one used in Toledo this past January. The four teams will compete in a 3-on-3 round-robin tournament to crown a winner. Rally scoring will be featured, pitting all four teams against each other. Each team will consist of 10 players – six forwards, three defensemen and a goaltender.
The first round will be round-robin style, with each team competing against each other in six consecutive running clock games. All four teams will advance to the second round and will be re-seeded based on total score. The second round will feature two running clock games with the #1 vs. #4 seeds and the #2 vs. #3 seeds. The top two highest-scoring teams after Round 1 and Round 2 will meet in the third round for the final matchup. The finals will feature the #1 vs. #2 seed in a running clock game to determine the tournament champion.
All-Star players will be announced in January 2020 via a vote of ECHL coaching staffs, captains and media. The two Thunder teams will be chosen via a live draft at a time and date to be announced in December. 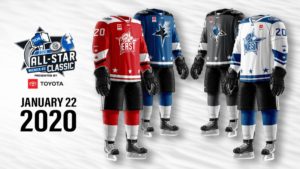 Similar to last year, the skills competition will consist of Hardest Shot, Accuracy and Fastest Skater. Each competition will feature one player from each team, with the winning player earning one point for his team.

The 13th class of the ECHL Hall of Fame will be inducted at the Drury Plaza Broadview Hotel at a dinner on Tuesday, January 21 at 5:00 pm. Immediately after the Hall of Fame Induction Dinner, the ECHL All-Star FanFest will also be held at the Drury Plaza Broadview. The event will feature a live band, autographs with the players, numerous interactive games, as well as displays from the Hockey Hall of Fame, including past Wichita memorabilia items. FanFest will start at 7 p.m. following the annual ECHL Hall of Fame Induction Dinner.