On Wednesday, the Thunder announced the first three signings to their preseason roster for 2019-20.

WICHITA, Kan. – Free agency has been underway in the ECHL for the last two-plus weeks and while the Wichita Thunder have been quiet in the early stages of this period, it doesn’t mean head coach Bruce Ramsay hasn’t been busy burning cell phone towers trying to find the next crop of Thunder players.

“It has been a very good signing period,” Ramsay recently told The Sin Bin. “We have 12 or 13 players signed and ready to go.”

On Wednesday, the Thunder announced the first three signings to their preseason roster for 2019-20. In this wave of signings, Ramsay went with big-bodied forwards who have some pro and collegiate experience. 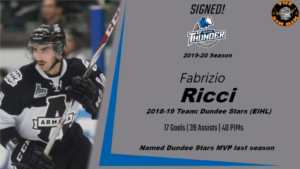 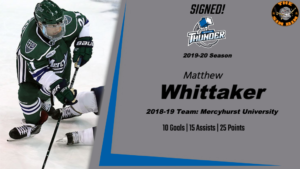 Next, Matthew Whittaker joins the Thunder after playing five games with the Kelly Cup Champion Newfoundland Growlers and coming off a four-year career with Mercyhurst University. While he was held pointless in Newfoundland, he put up 58 points in 106 games. In 2018-19, Whittaker was named to the Atlantic Hockey Conference’s all-academic team, had a four-game goal streak, and racked up five points in two games against Canisius. 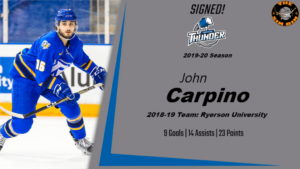 “I’m very excited to have these three young, hungry forwards as part of the Thunder family,” Ramsay said. “They all bring size, grit and determination to our lineup and I’m looking forward to helping them achieve their goal of playing at a higher level.”

Keep track of all the signings and movement during the 2019 ECHL offseason by visiting our ECHL Transactions page!