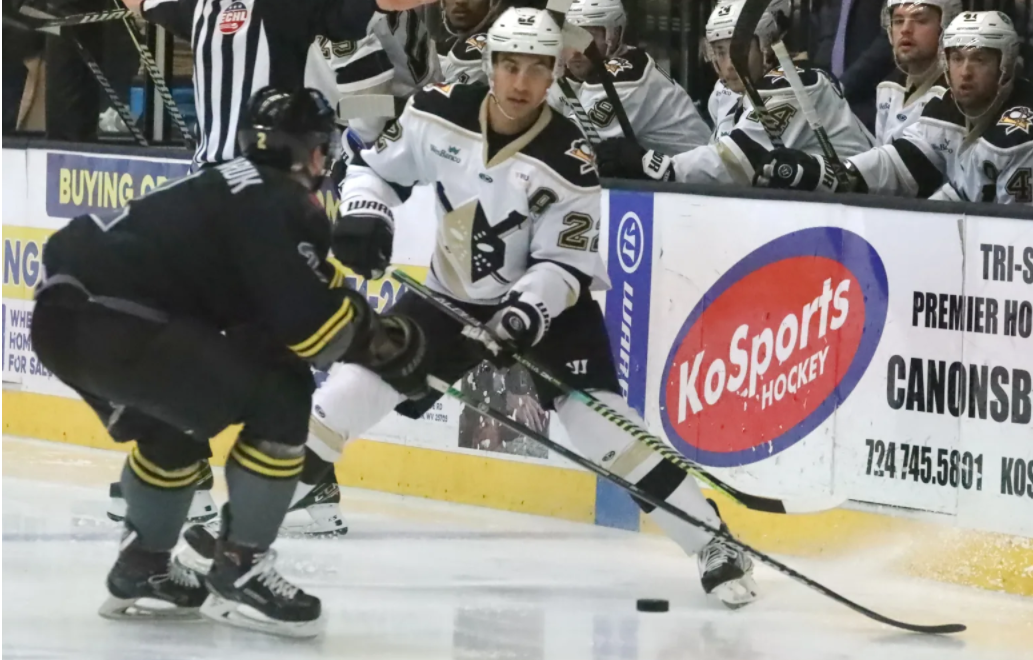 Trevin Kozlowski was spectacular, stopping 35 of the 37 shots he faced. He moved to 5-6-1 with the victory.

WHEELING, W.Va. – Joe Widmar scored with 2:37 left to lead the Iowa Heartlanders to a 4-2 victory over the Wheeling Nailers on Saturday. Iowa had taken a 2-0 lead only to see Wheeling battle back to tie the score. However, Widmar ruined the comeback, scoring his seventh goal of the year. Jake Smith and Jack Billings each had a goal and an assist for Iowa. Trevin Kozlowski made 35 saves to earn the victory.

Iowa came out of the first period holding a two-goal edge. The red-hot Smith got the scoring going for the Heartlanders, netting his 10th goal of the season 5:37 into the contest. Jeff Solow dumped the puck into the Nailers zone. Billings outskated the Wheeling defenseman for the puck, then fed it in front to Smith who buried a one-timer by Stefanos Lekkas to make it 1-0.

The Nailers were hoping to get to the first intermission trailing by just a goal, but a 5-on-3 power-play enabled the Heartlanders to extend their lead to two with just 10 seconds left in the frame. Smith moved the puck to Billings at the right faceoff circle, where he lifted a wrist shot that beat Lekkas for his 11th goal of the season.

Kozlowski was on top of his game, making 13 saves in the first period and stopping the first eight shots of the second, including a flurry of shots to begin the frame. However, Wheeling finally got on the board when Nick Hutchison scored on the power-play right at the 11-minute mark. Niclas Almari passed the puck back to Patrick Watling, who blasted a one-timer that Hutchinson deflected by Kozlowski.

The Nailers completely dominated the second period, outshooting Iowa, 16-1. It was only because of the play of Kozlowski that this game was not tied.

Wheeling continued that pressure into the final frame and was finally able to tie the score 70 seconds into the period. The play started when Billings was stoned by Lekkas on a breakaway. Back the other direction that play went. Justin Almeida had the puck inside the Heartlanders zone, but it was knocked off his stick. Hutchison had only one play, and that was to dive to knock the puck toward Watling, which he did. Watling tapped it in to tie the score at two.

This game seemed destined for overtime, but a bad bounce off the boards put the puck on the stick of Connor Graham behind the net. Graham quickly fed it in front to Widmar, who put the puck in for his seventh goal of the year. Graham finished two assists.

With 16 seconds left in the contest, Ben Sokay put the puck in the empty net for his fifth goal of the year. That made it 4-2.

Kozlowski was spectacular, stopping 35 of the 37 shots he faced. He moved to 5-6-1 with the victory.

These teams will square off again this afternoon. The puck drops at 3:10 Iowa time.