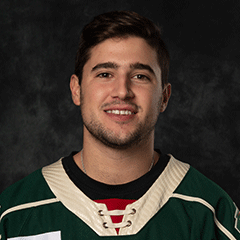 DES MOINES, Iowa – At 5’8” and 157 lbs., Iowa Wild forward Sam Anas is clearly not the most intimidating person on the ice. At times, he looks like a boy among men, but there is no denying the skill and grit of the 26-year-old. He is a pure scorer and playmaker who combines his great hockey IQ with his physical skills to be one of the most dangerous players every time he takes the ice.

A PURE LOVE FOR HIS SPORT

Whether he is at practice, standing in front of a group of reporters after a game, or face-to-face with an opponent 50 pounds his superior, Sam Anas is having fun. It is clear he loves his job, and that attitude is infectious. In fact, one would be hard pressed to find someone with a negative thing to say about the Wild forward (unless you are talking to an opposing goalie, of course).
It is not surprising to see Sam enjoying the sport he loves. It is pure joy for him, and has been so since the first time that his parents put a hockey stick in his hands.

“I think I got a hockey stick on my second birthday and it just took off from there. We’ve got a nice home video of me whacking the ball around the kitchen. Pretty funny.”

While playing other sports as a kid, Sam loved hockey and proved to be quite good at it. At age 12, he joined the Washington Little Caps (AYMBHL) for seven games, scoring two goals and adding two assists. A year later, he joined Team Maryland for 20 games, where he produced six points. 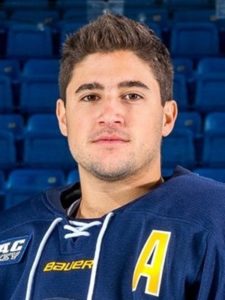 “There was a tough transition, I think it was such a great league and I was happy to be playing in it. The first year was pretty good, but maybe not great,” Anas explains of his first year in the USHL. “But, the second year was great. We had a great team and it was just a great transition to play there for two years before going to college.”

At 20, Sam Anas was ready for the next challenge and looking to prove that his skills transitioned well to the collegiate level. It didn’t take him very long to prove that not only did he belong, but that he would be a star.
Sam headed for Quinnipiac University where he would lead the Bobcats for three seasons. As a freshman (2013-14), Sam led the Bobcats with 43 points (22 goals, 21 assists) in 40 games. That earned him the Tim Taylor Award as the Rookie of the Year in NCAA Division I Men’s Hockey. He was the first Quinnipiac player to ever receive the honors.
A year later, Anas continued to develop as a pure sniper, scoring 23 goals while adding 16 assists in 38 games. He was named to the AHCA/CCM Hockey All-American Second Team, just the third time in school history that a player had received All-American honors.
Sam was proving that the collegiate level was not too big of a stage. Most importantly, he was finding the atmosphere of the school to be ideal.

“It was a great transition, I think, playing with those older guys in college and just being in a great atmosphere. We had such a family type atmosphere that everyone took care of each other and there was never any hazing or anything. The seniors took us in right away. Just a great group of guys and the culture. everything there, from the coach to the strength coach to everyone, is just an awesome place.” 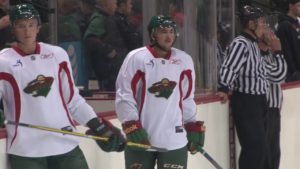 In his junior season, Sam Anas took his game to a whole new level. Appearing in 43 games, the forward scored 24 goals and added 26 assists. His point total ranked him 10th in the country and his 24 goals was seventh. Sam proved to be especially dangerous on the power play, where he was tied for the most points in the country with 24. This helped to make him an All-American for the second straight year, earning First-Team honors.
He helped his team reach the Frozen Four in his junior season, where they finished as the runner-up. It was the perfect combination of a great career at Quinnipiac where he led the team in scoring all three seasons.
While proving that he was one of the best players in the country on the ice, Sam was also excelling in the classroom. In three years, he had pushed himself so that he was able to graduate with a bachelor’s degree in business.

“There were a lot of us who were taking extra classes, whether it was in the summer or during Christmas break. So, I was on pace to graduate in three years.”

MAKING THE PROS HIS PRIZE IN IOWA

Sam Anas went undrafted during his college career, making him a free agent when he graduated from Quinnipiac University. He chose to sign with the Minnesota Wild, and has found it to be the perfect landing spot.

“My only year in college that I was draft eligible was my freshman year, and just the way that that process works, there is not many guys that get drafted in their last year, especially an undersized guy like myself. I think it worked out to my advantage. I ended up in a place where I’m happy.” 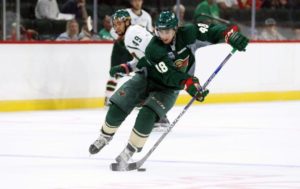 Sam was assigned to the Minnesota’s AHL team in Iowa, where he has made the most of his opportunity. In his first season, the forward scored 12 goals and added 16 assists in 66 games. A year later, he set a career high with 26 goals and 35 assists in 70 games. Last year, his goals scored decreased slightly to just 14, but he set a single season-high with nine power-play goals and added 24 assists in 60 games.
This year he has returned to Iowa for his fourth year with the team. The season started out well for Sam, who had three goals and five assists through his first six games, but it has been more of a struggle of late, as he has three points in his last eight games.
A lot of players would be hitting the panic button in a situation like that, but not Sam. He understands that there are going to be periods where he may struggle, but as long as he keeps doing the things that got him to where he is, he knows things are going to turn around.

“I think we practice hard and I think practice is definitely where you develop your skills. We spend a lot of time on the ice, whether it’s just shooting or skating. I get a lot of time to work & develop, and that is a good thing.”

He understands that it is that work ethic that will eventually reap the results he expects out of himself.

“It’s the guys that work hard that get rewarded. Those are the guys that do the best in this world. It’s all about competing and getting your nose dirty and getting in there. I’m going to approach each day to get better and trying to be the best player that I can be.”

LIVING UP TO HIS NAME

The name Anas comes from Agnes, which means “holy” or “pure.” There are a lot of people who reach this level who try to give off the appearance of humility or that they believe that the team comes first. There is no façade to Iowa Wild forward Sam Anas — he’s the genuine article.

Sam is a guy who has a pure love for his sport, a pure passion to succeed, and a pure desire to see his teammates flourish as well. That last part may be the most important piece of all to him.

“I just want to be known as a great teammate and someone that you can rely on, (both) on the ice and off the ice. Whether there’s any sort of situation, I’m just always there and I’ve come with a smile. I have their backs every night. That’s what is most important.”

Now with multiple seasons under his belt for the Wild, Sam is embracing the fact that he is one of the leaders on this team. He is taking it upon himself to make a difference, especially with the newer players.

“It’s my fourth year here. it’s kind of nice to just kind of step into that kind of role, whether it’s a younger guy who needs help finding an apartment or questions about things. They know that I’ve been here and kind of been through things, and I want to help in any way I can.”

Of course, in true Sam Anas style, he is not patting himself on the back for his approach to life. He is giving credit to the two people who had the greatest influence on his life.

“I don’t think it’s something that I’ve ever focused on. I think all that is just a credit to my parents and the way that they raised me in just being a selfless person. I think being positive can be pretty contagious around the rink and the locker room. They taught me to just have a good time, to enjoy what you’re doing, and love it.”

The Minnesota Wild could be undergoing a lot of transition this season. The team is tied for the worst record in the NHL, and a complete rebuild may be in the works. This could be a golden opportunity for Anas to reach the highest level in the sport, but that is not where his focus is. He is coming to the rink each day for the pure love of his sport.

“If I’ve learned anything playing professional hockey, it is you can’t focus on other things. You got to just focus on what you can control. and whether Minnesota is the top team in the league or the bottom team in the league, no matter what, I want to have the best season that I can. I think it doesn’t really matter how they’re doing.”

Sam may not be off to an ideal start, but he will be working hard every night to reach his ultimate goal. He will also be pushing his teammates to reach their greatest potential, all while loving every second of every practice, every faceoff, and every press conference.
There is a saying that goes, “The pure heart is a spotless mirror in which images of infinite beauty are reflected.” For young players out there wanting to know how to play hockey, there may be no more beautiful player to watch than Sam Anas. Even if he never makes it to the NHL, he has already presented himself as a ‘spotless image’ of how the game is to be played.
Follow Robert on Twitter for all his news and coverage of the Iowa Wild this season!