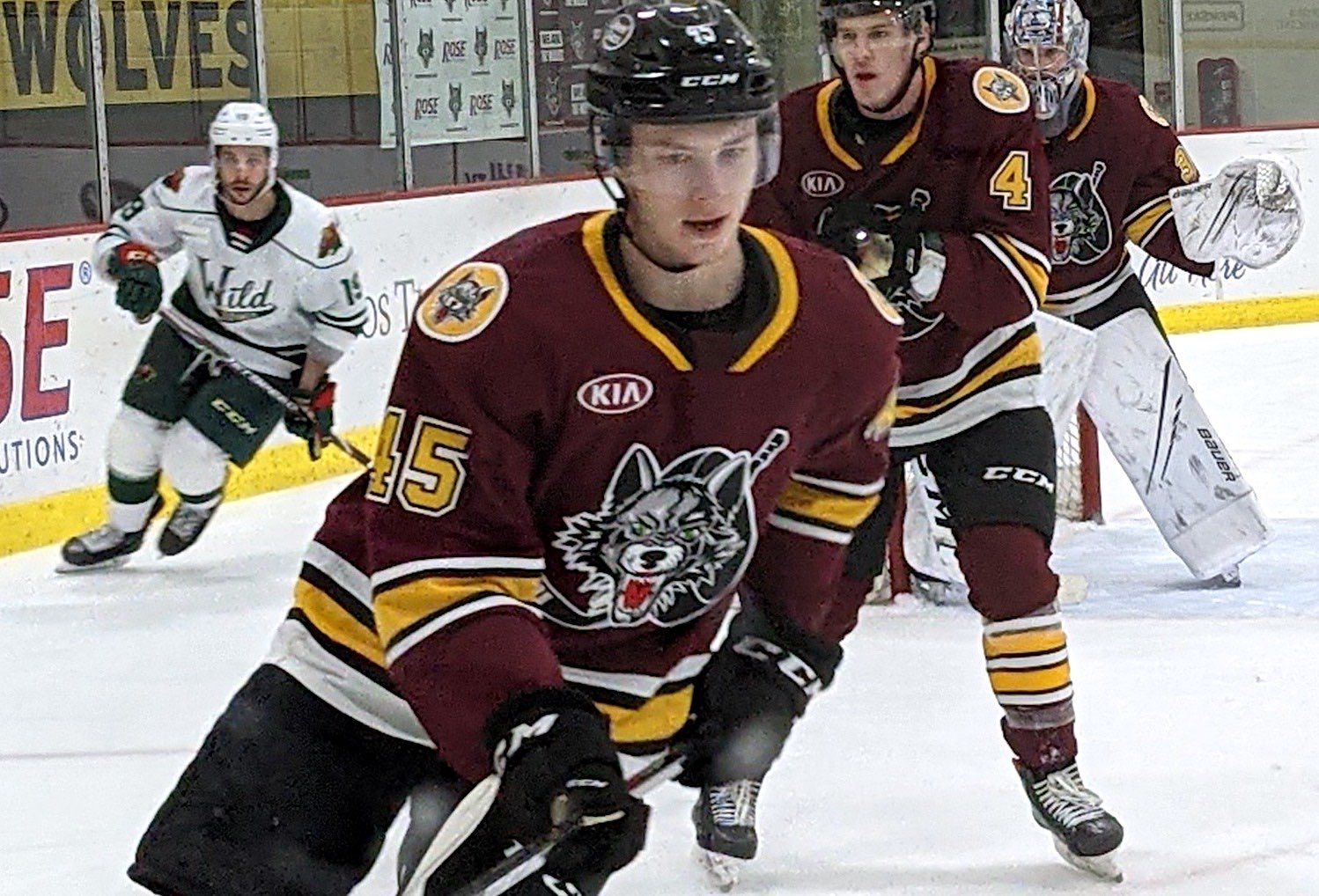 HOFFMAN ESTATES, Ill. – The Chicago Wolves and Iowa Wild faced off for back-to-back games this weekend, and though it was a tale of two games, the song remained the same for the Wolves who now sit at 7-0-0 for their best start in franchise history.

Saturday’s game started off right for Coach Ryan Warsofsky’s squad and they never looked back from their hot start. Morgan Geekie led the way for the Wolves, recently on assignment from the Carolina Hurricanes. Geekie put a rebound in just nineteen seconds into the game, and the Wolves poured on four goals on the hapless Wild just ten minutes into the first period. Anthony Richard, Ryan Suzuki, and Rem Pitlick followed up on Geekie’s tally.

The second period was much the same, as the Wolves added five more goals in the middle frame to turn this one into a foregone conclusion rather early. Seth Jarvis had two to bring him into the AHL goal-scoring lead, Geekie and Pitlick added one more each, and Cole Smith got in on the action as well. The Wolves played with speed, unselfish team play and puck possession to skate out to a flawless opening forty minutes.

Iowa managed to grab two goals from Dmitrii Sokolov and Mitch McLain, but it was a story of too little, too late for the Wild. Tom Novak added a third period tally to go along with his three assists, and at the final buzzer, the Wolves had skated off with a 10-2 victory on Saturday night.

“We didn’t get complacent there, getting up big.” Coach Warsofsky said following the victory. “We were aggressive. We were making some good plays offensively and I really liked the effort. Tomorrow morning we’re going to see a different Iowa team.”

As it turns out, Coach Warsofsky would be correct, as Sunday afternoon’s game featured a much different energy. Iowa came out with an aggressive energy to start, led by their big forwards up front to bring a very physical game out from the opening puck drop.

Again, Morgan Geekie led the way for the Wolves, who opened up the scoring with not one but two power-play goals – one off a redirected Joey Keane shot and another with a slapshot from the right circle that found the top corner.

A minute into the second period and it was Rem Pitlick again getting in on the action, and his redirection out front gave the Wolves a 3-0 lead and also tied him with teammate Seth Jarvis for the AHL goal-scoring lead with his sixth of the season.

Iowa wouldn’t go away so easily in this one, pouring nineteen shots on goaltender Beck Warm in the second period alone, beating him once on a Mason Shaw knuckle puck from the outside. Warm, however, did not allow that tally to phase him, refusing to allow another goal and making save after save with the Wild applying serious pressure from the second and into the third period. Despite being outshot 41-14 by the Wild, Tanner Jeannot added an empty-net goal and the Wolves rode Warm’s 40 saves to a 4-1 victory on Sunday night.

“Got the two points, but not our best.” Warsofsky said following his team’s seventh straight win to open the season. “For the most part, we were on our heels. Very good teaching moment in some of these young players’ careers.”

Morgan Geekie made a statement with his weekend – four goals and one assist in two games to earn AHL player of the week honors. He also had a fight (later reduced to a roughing minor) with Iowa’s Cody McLeod in defense of teammate Philip Tomasino, who had taken a rough hit from McLeod behind Jeremy Helvig’s net in Saturday’s game.

“He understands what it means to be a pro.” Warsofsky said of Geekie’s demeanor heading into the weekend. “It’s a frustrating time in a player’s career to be sent down, but it’s our job as coaches to build him back up.”

Carolina rewarded Geekie’s play this weekend with a call up to their taxi squad on Monday.

The Wolves return to action Friday at 6 p.m. where they travel to Grand Rapids to take on the Griffins in their third matchup of the series.