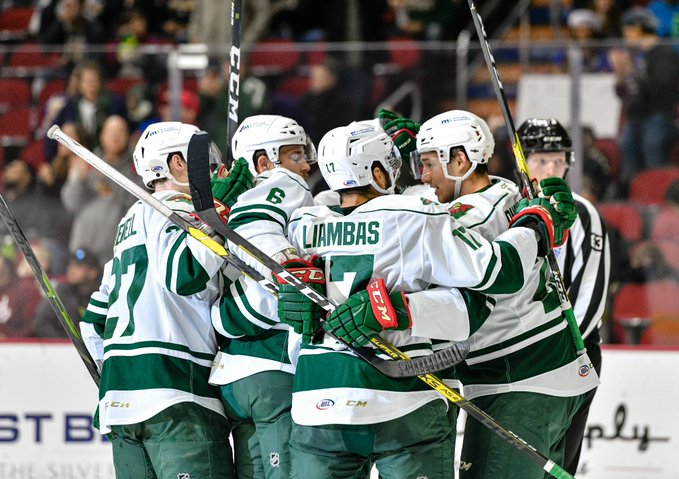 Wild Win on Goals by Anas, Mayhew in Shootout

The Iowa Wild won on Goals by Sam Anas and Gerald Mayhew in the shootout to defeat the Texas Stars 5-4. Iowa battled back from deficits four times.

Wild Win on Goals by Anas, Mayhew in Shootout

DES MOINES, Iowa – The Iowa Wild did not fare well against the Texas Stars in 2018-19 and were looking to leave the previous year behind them. However, falling behind four times on Friday night did not dispel any of the worries the team had about facing the Stars. That is until the Wild battled back four times in this contest, scoring the final goal with 50 seconds left in regulation before winning it in a shootout. Nine different players had points, as the team moved to 3-0-0 for the second straight season.

The Iowa Wild were looking to get on top as they took the first four shots of the game, but the ice would tilt back the Texas Stars direction. A pair of penalties at the 10:59 mark gave the Stars a 5-on-3 advantage. Texas set up the power play beautifully, passing it around, looking for the perfect shot. Ben Gleason and Tanner Kero worked the puck back and forth at the point. Gleason then blasted a slapshot that Kaapo Kahkonen saved, but the rebound came right to Michael Mersch, who put it in for his first goal of the year. The power-play goal made it 1-0.

That would be the score at the end of one, but the second would be a wild affair that would see each team score three goals. Will Bitten tied the score for Iowa just before the four-minute mark. He stole the puck along the boards in the Texas end, then fired a wrist shot over the shoulder of Jake Oettinger for his second goal of the season.
The score stayed tied for just 22 seconds. Emil Djuse’s shot from the point was stopped, but Denis Gurianov tucked it in for his first goal of the season.
Iowa would tie the score again at 7:12 in the second. With the Wild on the power play, J.T. Brown passed the puck across the crease to Nico Sturm, who blasted the puck in for the first goal of his professional career.
Just before the halfway point, Gurianov added his second goal of the period. Tanner Kero passed the puck to Gurianov just below the faceoff circle to the left of Kahkonen. He skated to within 10 feet of the net before blasting a slapshot past the Iowa goaltender to make it 3-2.
Just 88 seconds later, the score would be tied once again. Mitch McLain swept in on goal attempting to put the backhander in. Oettinger made the save, but the puck came to Brandon Duhaime, who shoveled it to Mike Liambas, who fired the puck in for his first goal of the year.

The celebration did not last long as it would be Gurianov with the hat trick with just under five minutes left in the second period. Gurianov took the puck out of his end on a 2-on-1 break. He carried it in, opting to take the shot. That proved to be a wise move as he put it in for his third goal of the game. That made it 4-3, which would be the score heading to the second intermission.
At the break, Head Coach Tim Army considered switching his goaltender, but a word from Kahkonen changed his mind.

“He always comes by the bench and we always chat. I liked his mindset. I said to just keep it at four to give us a chance to come back and tie and win it.”

That proved to be a wise move as the goaltender stoned the Stars in third. That included stopping a Brad McClure breakaway with three minutes left in the game.
That save proved to be huge, as the Iowa Wild tied the score with 50 seconds left in the game. With Kahkonen on the bench for the extra attacker, the Wild were able to keep the puck in the Texas end thanks to a great play at the point. The puck came to Sam Anas, who fired a shot. The save was made on the initial shot, but the rebound popped out to Gerald Mayhew, who put it in to tie the score. The Mayhew goal was his third of the season.
After neither team was able to convert in overtime, the game went to a shootout. Anas was up first and made a nice move, slowly moving in on goal before sliding the puck just inside the right post. The Stars would tie it on Gurianov’s chance. Mayhew was up next, and he, too, would make a nifty move before going over the goaltender’s pads for the goal. From there, it was Kahkonen, who made saves on the next two chances to win it for the Wild.
These two teams will meet again on Saturday. The game is scheduled for 7:00.
Follow Robert on twitter @SinBinWild for all the latest news on the Iowa Wild.