DES MOINES, Iowa – For the second straight night, the Iowa Wild found themselves trailing the Bakersfield Condors 2-1 entering the third period. And for the second straight night, the Wild scored early in the frame to tie the score, but this time it would take a classic eight-round shootout before the Wild would win it, 3-2. J.T. Brown delivered the game winner and Mat Robson made it stand, stopping six of eight attempts he faced to complete the weekend sweep.
The Wild controlled play early, but it was the Bakersfield Condors that got on the scoreboard first, finding the back of the net on their second shot of the afternoon. At 3:53 of the first, Bakersfield brought the puck into the Wild end. Logan Day stopped at the right faceoff circle, then fired a shot that Josh Currie deflected through the legs of Robson. The puck trickled across the goal line for Currie’s ninth goal of the season and second in two nights.
The one goal lead held into the second, despite Bakersfield being outshot 15-13 in the first period. This was a wide-open affair through two periods, as Iowa had 28 shots and Bakersfield 24 through two. 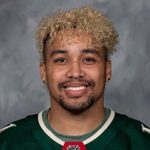 With 2:03 left in the second, Iowa finally was able to break through against Condors netminder Dylan Wells. The Wild won the faceoff in the Condors end. Brown brought the puck around the boards before passing to Josh Atkinson at the point. He fired a shot that Cody McLeod tipped just inside the post for his third goal of the season. It was also his second straight game with a goal.
It looked like the two teams would head to the locker room tied at one after two, but the Condors added a goal 21 seconds before the break. While on the power play, Joel Persson blasted a shot from the point that Day tipped just under the crossbar for his second goal of the year.
The goal may have disheartened some teams, but not the Wild. Iowa came out of the second break fired up, dominating the third by outshooting Bakersfield, 15-3. They tied the score 4:32 into the third, taking advantage of a power play opportunity. Matt Bartkowski fired a wrist shot from the point that Gabriel Dumont deflected between the legs of Wells for his seventh goal of the year. All four goals came on deflections.
The Iowa Wild continued to dominate into the extra frame, outshooting Bakersfield 7-3, but they could not get the game winner by Wells, who was absolutely awesome. The Condors goalie stopped 49 of 51 shots in the contest. 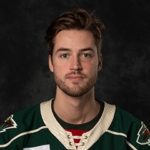 The game then went to a shootout. Sam Anas went first for Iowa, beating Wells with a wrist shot glove side, but Cooper Marody responded for Bakersfield to tie it at one. The two goalies stopped each of their next two attempts. In Round Four, Nico Sturm beat Wells to put Iowa back in the driver’s seat with a beautiful backhand goal, but Currie responded with a goal to force a Round Five.
It would go three more rounds with neither goalie relenting to allow a tally. This included Robson making an absolutely amazing save from his stomach on Kirill Maksimov to keep the shootout going. Finally, in Round Eight, Brown delivered the game winner. He skated in on Wells before firing a quick wrist shot between the Condors goalie’s legs. Day had one more chance to keep the shootout alive, but Robson kicked aside his attempt to give the Wild the victory.
The Iowa Wild won both games against the Bakersfield Condors over the weekend. That moves the Wild to 11-4-4 (26 points), five points behind the red-hot Milwaukee Admirals for the top spot in the Central Division.
Iowa will travel to Texas to take on the Stars this coming Tuesday. Opening faceoff is scheduled for 7:00 CT.
Follow Robert on Twitter for all the latest news and notes on the Iowa Wild!