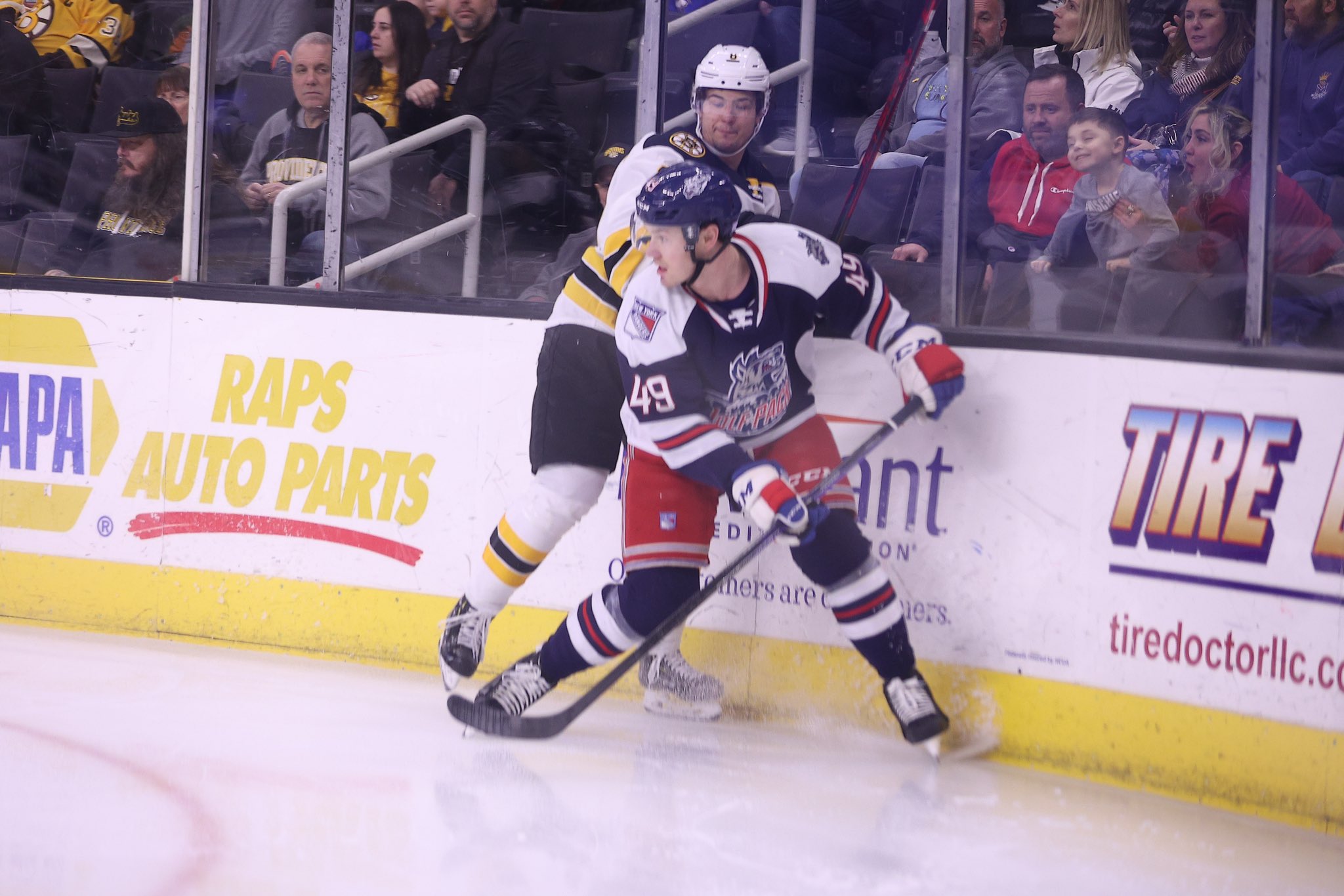 Wolf Pack Down Bruins in OT

#AHL | The surging @WolfPackAHL met up, once again, with the red-hot @AHLBruins in a playoff-like series. What familiar face rejoined the Wolf Pack? Who were the difference makers? @FPHBears has the story.

Wolf Pack Down Bruins in OT

PROVIDENCE, R.I. – It was another meeting between the Hartford Wolf Pack and the Providence Bruins at Amica Mutual Pavilion on Sunday afternoon as the miniature playoff series between the two teams hit its fourth game. After the Bruins took Friday’s matchup, this time, the Wolf Pack battled from a deficit to take this game in overtime by a 4-3 count, thanks to Will Cuylle’s 13th of the season just over a minute into overtime. Louis Domingue earned the win with 23 saves, while Brandon Bussi took the loss with 38 stops. The win continues a nice stretch of hockey for the Wolf Pack, who have points in nine of their last ten games while simultaneously keeping the Atlantic Division standings in a pileup.

Hartford’s good fortune started ahead of Sunday’s game as forward Jonny Brodzinski was returned to Hartford from their National Hockey League affiliate, the New York Rangers, paying immediate dividends. Brodzinski scored his third goal at the American Hockey League level in his first game back in Hartford since November 26, 2022. Brodzinski put up 39 points in 36 games in the AHL a season ago, and it’s safe to say he’s a key part of his team as he drove the net and buried the loose puck.

In any game where the Providence Bruins are playing, it’s hard to go a game without talking about Vinni Lettieri, who finds his way onto the scoresheet more often than not but particularly so against rival teams like Hartford. The scoring forward pushed his goal count to 16 on Sunday with a pair of goals separated by a Ty Emberson tally to square the game up at two apiece. Emberson has points in three straight games, while Lettieri proved he can do it all by scoring his first goal shorthanded and then blasting away on a feed from Connor Carrick late in the second period on the power play.

Providence went into the final frame firmly in the driver’s seat as Carrick scored his fourth goal of the season just over a minute after Lettieri’s tally for a 3-2 Bruins edge. It set the stage for another big-time Wolf Pack player to get in on the action as Ryan Carpenter extended his point streak to five games with a big goal to tie the game as he drove the net and found the pass for his tenth goal of the year after he spent a bit of time with the Rangers on recall.

#10 on the year for Carpy🚨 pic.twitter.com/bHZy77VoiF

The game went to overtime but wouldn’t stay there for too long as Tanner Fritz fed Cuylle on a two-on-one rush to decide things just over a minute in to give the Wolf Pack the extra point. The series of games has been an impressively even one, as each team has one regulation win and one overtime win over four games, making the match-up one to earmark in the event that these two teams meet again in the Calder Cup Playoffs should both teams qualify.

The two teams meet again for the fifth and final game of this stretch on Friday in Providence.

Hartford plays one game in the interim time as they take on the Bridgeport Islanders on Wednesday night. It leaves the Atlantic Division in the same state as it has been in recent times as the logjam of teams hits another interesting point, with three teams even at 41 points for spots six through eight in the division. Meanwhile, the third-place Charlotte Checkers are only three points ahead of them at 44. No team has been able to catch fire enough to pull away from the others outside of the top teams in Hershey and Providence, which makes this race extremely intriguing down the stretch.