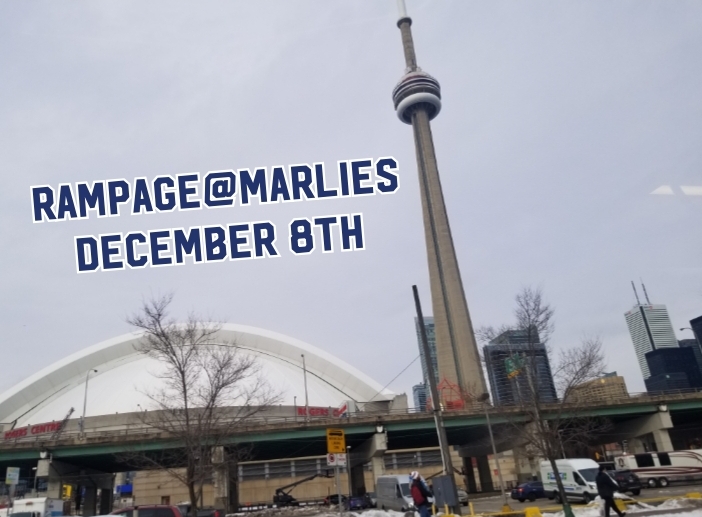 TORONTO – There’s something about the Coca-Cola Coliseum; it’s almost like the Toronto Marlies can’t be touched.

TORONTO – There’s something about the Coca-Cola Coliseum; it’s almost like the Toronto Marlies can’t be touched. Toronto has only one loss at their home rink this season. With the San Antonio Rampage back to fight one more day, the Marlies were bursting with confidence heading into Sunday’s game.

“I think there’s a level of comfort when playing at home, Kind of a daily routine.”

The most significant changes coming in crease for the matinee were Adam Wilcox and Joseph Woll getting the nod. Wilcox has spent the past five seasons in the American Hockey Leauge, while Woll is in his rookie season. Both tendys have stopped 89% of their shots faced this season.

Wasting no time, the Marlies posted the first goal. Kristians Rubins found the puck in the slot and was able to make a well-timed shot in the middle. Jake Walman found himself screening Wilcox and cost his team the first goal.
Just four minutes later, Rich Clune scored on Marlies second shot. Receiving the cross-ice pass from Hudson Elynuik, he banked in his first of the season.
The Marlies had long five-on-three stretches deep in the opening period. However, with over 90 seconds of a two-man advantage, the Marlies couldn’t seal the deal. This failed opportunity boosted their power play to 12 straight without a goal. After the game, Interim Co-Head Coach A.J. MacLean told the media that the five-on-three is something they’re going to work on in practice.
With the first period down, it’s hard to rag on both teams for their play. The Rampage got unlucky with the first goal and wasn’t able to cover on the second. If both squads stayed with the same structure, I couldn’t see why the game would be anything but entertaining.
Additionally, the Marlies gave up a penalty shot in the middle stages. Woll came up strong on the blocker side to preserve the insurance goal lead.

The Rampage broke the ice early with a goal from Andreas Borgman. The goal was initially marked as a good goal, but after close examination, the referee overturned the call to proclaim it a no goal.

9:40 in the second period saw the Marlies’ first shot of the frame. By this time, San Antonio already had 13 shots on net. With a dump-and-chase style of play and a defensive push in the middle period, the Rampage began to walk over the Marlies (DYK: Toronto averages the least amount of shots per game in the AHL, with 26.13?).
At the end of forty, there were no goals to record in the second frame. The shot sheet had seen it’s a fair share of the numbers, registering 16-3 for San Antonio.
In the third, the Rampage poured everything onto Woll but came up short at each turn. Woll stood through 37 shots in the first 53:00 and saved everything. Woll’s game proved that he’s the goalie we anticipated, and could be the future face of the Maple Leafs in the paint.
In a bold, last kick at the cat, the Rampage pulled their goalie with well over five minutes left in the third and called their only timeout. While on the power play, this created a six-on-four operation. The plan worked, and the Rampage climbed back into the game with just over four minutes left in regulation. Ryan Olsen scored his third goal of the year to make it 2-1.
Deep in the Rampage zone with the fans buzzing, Darren Archibald spins a pass to nobody in the slot. Streaking towards the net was Jeremy Bracco to bury the shot passed Wilcox, who was on all fours.
Adam Brooks would add an empty-netter on a Mitch Reinke blunder to seal the deal and take the game 4-1.

“We snapped back into it, and we got our competitiveness up. I’m glad the way the game ended.”

The Rampage played two solid games against Toronto and came up short in both. San Antonio has one of the highest shot totals in the league, and during the two games this weekend, most were good quality at that. The Rampage ran into two stiff goalies this weekend, which is never easy.
For the Marlies, though they capitalized on the shots they took, it could have very quickly been a different game. With 41 shots poured on the rookie goalie Sunday, they have to give credit to Woll and Kasmir Kaskisuo on a superb weekend.

“I think regardless of what happens, I can always trust the guys in front of me to get the job done.”

The Marlies next game comes on Wednesday in Utica against the Comets. The game will be broadcast on AHLTV at 7:00pm EST.

The @ontarioreign scored a couple of beauties in the shootout to pick up the win at home on Saturday. pic.twitter.com/o4BHJEjquD

Follow Zack on Twitter for his live, in-game coverage and overall news and notes concerning the Toronto Marlies! Also, don’t forget to “like” The Sin Bin on Facebook for all additional AHL, ECHL, and SPHL minor league hockey coverage!