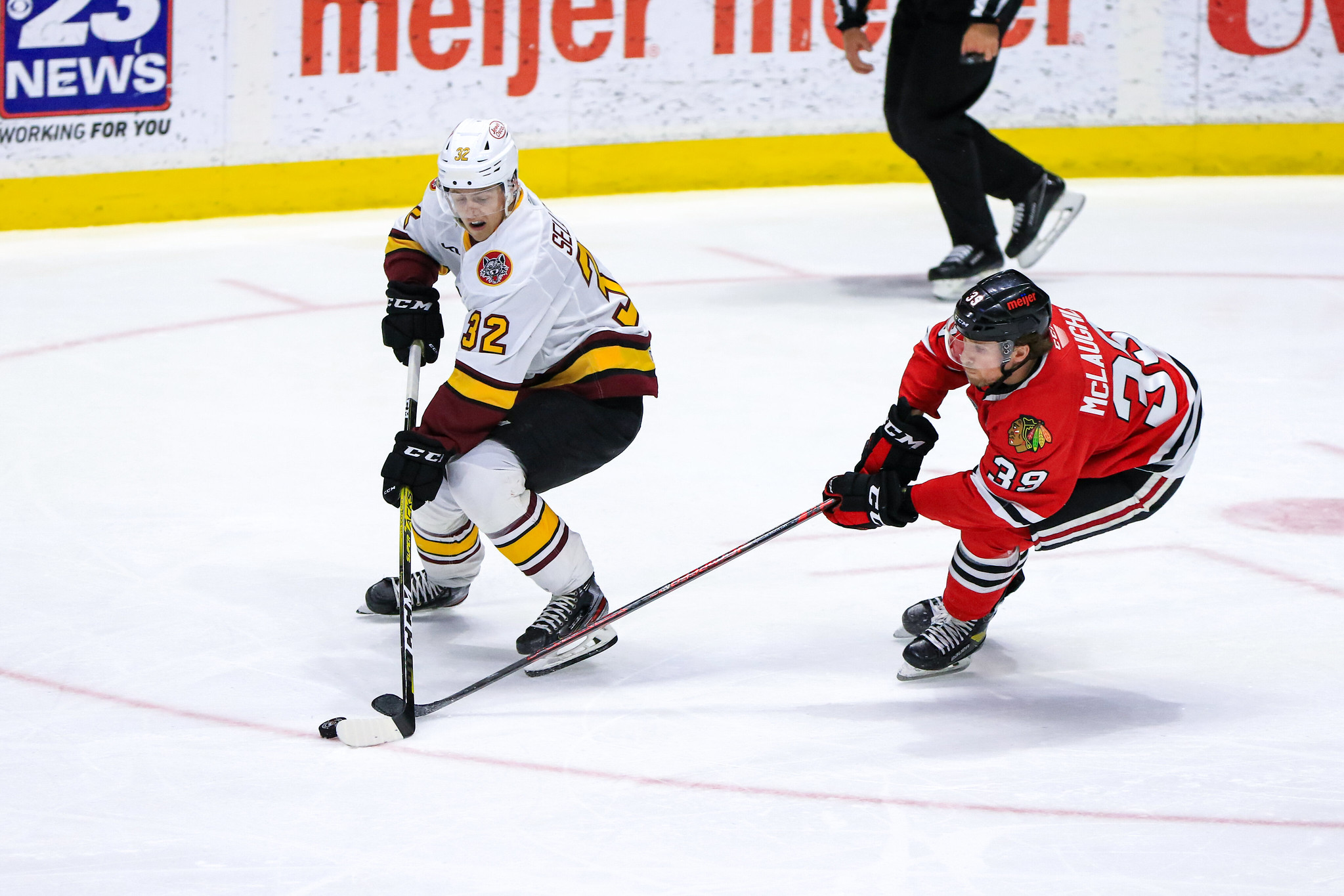 ROCKFORD, Ill. – The Chicago Wolves took the ride down I-90 to visit their in-state rivals in Rockford to continue this best-of-five division semifinal. Up two games to none, Sunday afternoon afforded the opportunity for the Wolves to close out the series with a clean sweep – an outcome that, even despite the Wolves’ success this season, wasn’t anticipated by most considering the IceHogs’ regular-season record against Chicago.

The Wolves were confident, flying high, and knew they would have a desperate team fighting for their season’s lives on the other side.

By Sunday’s end, these two teams would meet in handshakes as the Wolves closed the series out with a 4-1 win.

While Chicago kept the lineup intact for the most part, one change was made – Ivan Lodnia was inserted into the bottom six for his postseason debut. Lodnia made an immediate impact in this one, taking a slick feed from Spencer Smallman at the side of the net. He found himself in traffic but dealt with it amazingly well, backhanding a chance past Rockford goaltender Arvid Soderblom to give the Wolves the early lead.

Rockford came out with an intent to be physical and bully the Wolves into submission in this one. The shift after Lodnia’s goal, Garrett Mitchell hit Stelio Mattheos into the boards well after the whistle, and the first of several altercations kicked off in this one. A few shifts later, it was Carson Gicewicz and Cavan Fitzgerald in a wrestling match behind goaltender Alex Lyon’s net, enough for two minutes for the both of them.

As the physical play ramped up, Lodnia cut across the middle on the rush and was caught by a huge hit from Andrei Altybarmakian. Lodnia was slow to get up after the collision and had to leave the game momentarily as a result. After 16 minutes of penalties and some words exchanged along with the crosschecks, a physical first period finally ended with the Wolves leading 1-0.

Early in this period, the IceHogs looked perhaps the best they had all series. They put the pressure on Chicago to defend their net and refused easy entries into their zone. Their best chance came on an Altybarmakian breakaway that Lyon turned away along with all of their other chances in the second. The Wolves, who are used to outshooting Rockford at virtually every measure, found themselves outshot 14-9 in the middle frame.

However, a boarding penalty by Ryan Stanton opened the window, and the Wolves would take their time cashing in. Just two seconds after the penalty ended, CJ Smith finished a give-and-go play with Richard Panik with a wrist shot to the top corner to extend the Wolves’ lead to 2-0. The goal gave Chicago some breathing room as they entered the intermission with just 20 minutes to close out the series.

Chicago wasted no time in pushing their lead even further. With Evan Barratt in the box in the opening minute, the powerplay went to work. Joey Keane got a shot through traffic that was redirected by Jack Drury out front and past Soderblom.

Down 3-0 early in the period, the IceHogs tried desperately to break through. A few defensive breakdowns opened up some opportunities for Rockford, including a breakaway chance by rookie stud Lukas Reichel. Still, Lyon continued to come up with the big saves to preserve his team’s lead. With Josh Jacobs sitting for hooking, Rockford finally got on the board when Ian Mitchell walked in from the wing and roofed a shot over Lyon’s glove.

It wasn’t long until an undisciplined Rockford squad gave the Wolves a shot on a 5-on-3. Sensing the opportunity to close out the series, coach Ryan Warsofsky called his team’s timeout up 3-1. The extra rest opened the door for his top unit, and it was captain Andrew Poturalski stepping out in front and beating Soderblom with a shot to the far side to put the dagger in the IceHogs.

With just under 3 minutes left, the white flag came from the Rockford side, and the Wolves would sweep the series at 3-0 with a convincing 4-1 win on the road.

Lyon made 29 saves in the close-out effort, while Soderblom stopped 36 shots in the loss.

The Wolves will play the Milwaukee Admirals in the Division Finals, beginning with Game 1 on Saturday night at Allstate Arena at 7:00 PM CST.