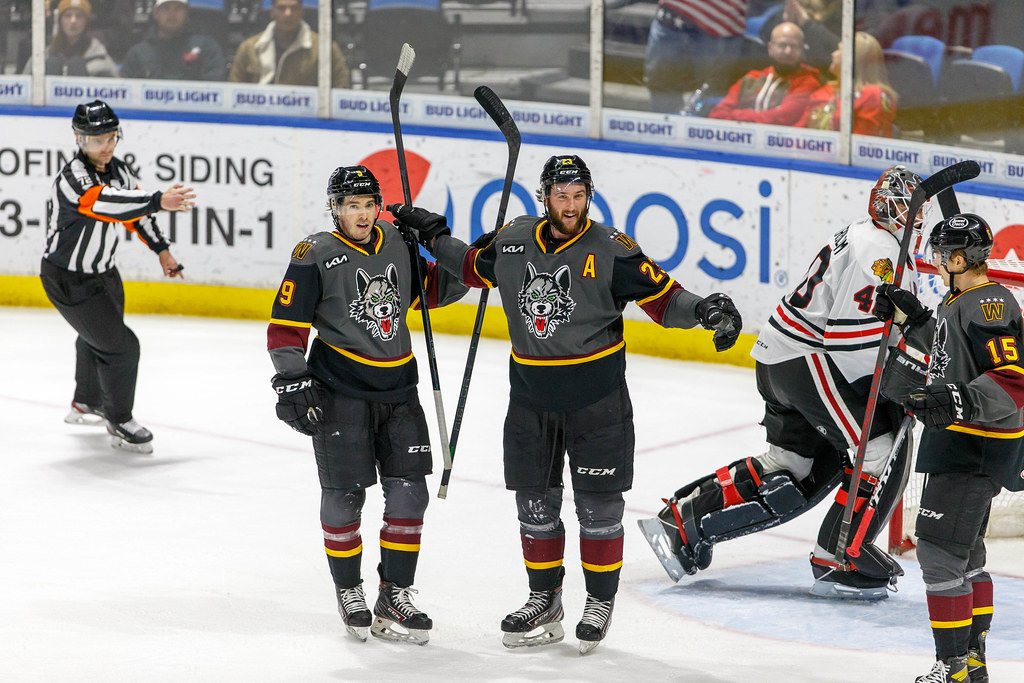 The Chicago Wolves were looking to avenge a lopsided defeat at the hands of the Rockford IceHogs. Monday afternoon, the Wolves did just that

ROCKFORD, Ill. – The Chicago Wolves were looking to avenge a lopsided defeat at the hands of the Rockford IceHogs. Monday afternoon at the BMO Harris Bank Center, the Wolves did just that.

Chicago outshot the IceHogs 45-18 for the game, though it took a pair of goals late in the second period to subdue Rockford. Stefan Noesen led the way with a pair of goals for the Wolves, who bested the Hogs 5-3.

Chicago handed Rockford (14-13-1-1) its second straight loss. The Wolves snapped a two-game skid of their own, improving their record to 24-6-2-1. They also got a measure of pride back after an 8-0 loss to the IceHogs in the last meeting between the clubs on January 7.

The Wolves drew first cord 4:38 into the contest. Noesen collected a long rebound of a Derek Topatigh shot and beat Hogs goalie Arvid Soderblom to the top left corner of the net.

Rockford tied the game midway through the first period on Ryan Stanton‘s first goal of the season. The play developed after Michal Teply missed an attempt from the right circle. Lukas Reichel won possession of the puck behind the Chicago goal and was able to return it to Teply, who sent a pass to the slot, where Stanton was on hand to fire past Wolves goalie Alex Lyon at the 11:11 mark.

The IceHogs took a 2-1 lead when Reichel scored 25 seconds into the second. Andrei Altybarmakian fought off a Wolves defender at the right dot to feed Reichel in front of the Chicago net. That advantage lasted until midway through the period, when the Wolves got two goals in quick succession from C.J. Smith and Andrew Poturalski.

Rockford drew even 9:54 into the period. Wyatt Kalynuk threaded a stretch pass to Dylan McLaughlin, who sniped the equalizer past Lyon. Chicago regained a 4-3 lead on a David Gust tally 14:34 into the second. They then went up 5-3 when Noesen redirected a shot by Poturalski past Soderblom for his second of the afternoon at the 15:59 mark.

The final twenty minutes went by without a goal, as the Wolves continued to control most of the action. The IceHogs pulled Soderblom for the final three minutes and did create some havoc in the Wolves crease. However, Lyon denied the Rockford onslaught as the clock ran out on the Hogs.

Noesen, who finished with an assist in addition to the two goals, was deservedly voted the game’s first star. Reichel had a goal and assist and was the second star. Smith (1G, 2A) was the third star.

The road trip continues for Chicago, which currently leads the Central Division. The Wolves visit second-place Manitoba on Saturday for the first of two games with the Moose. Rockford will try and get back into the win column Friday and Saturday when the IceHogs host the Texas Stars.