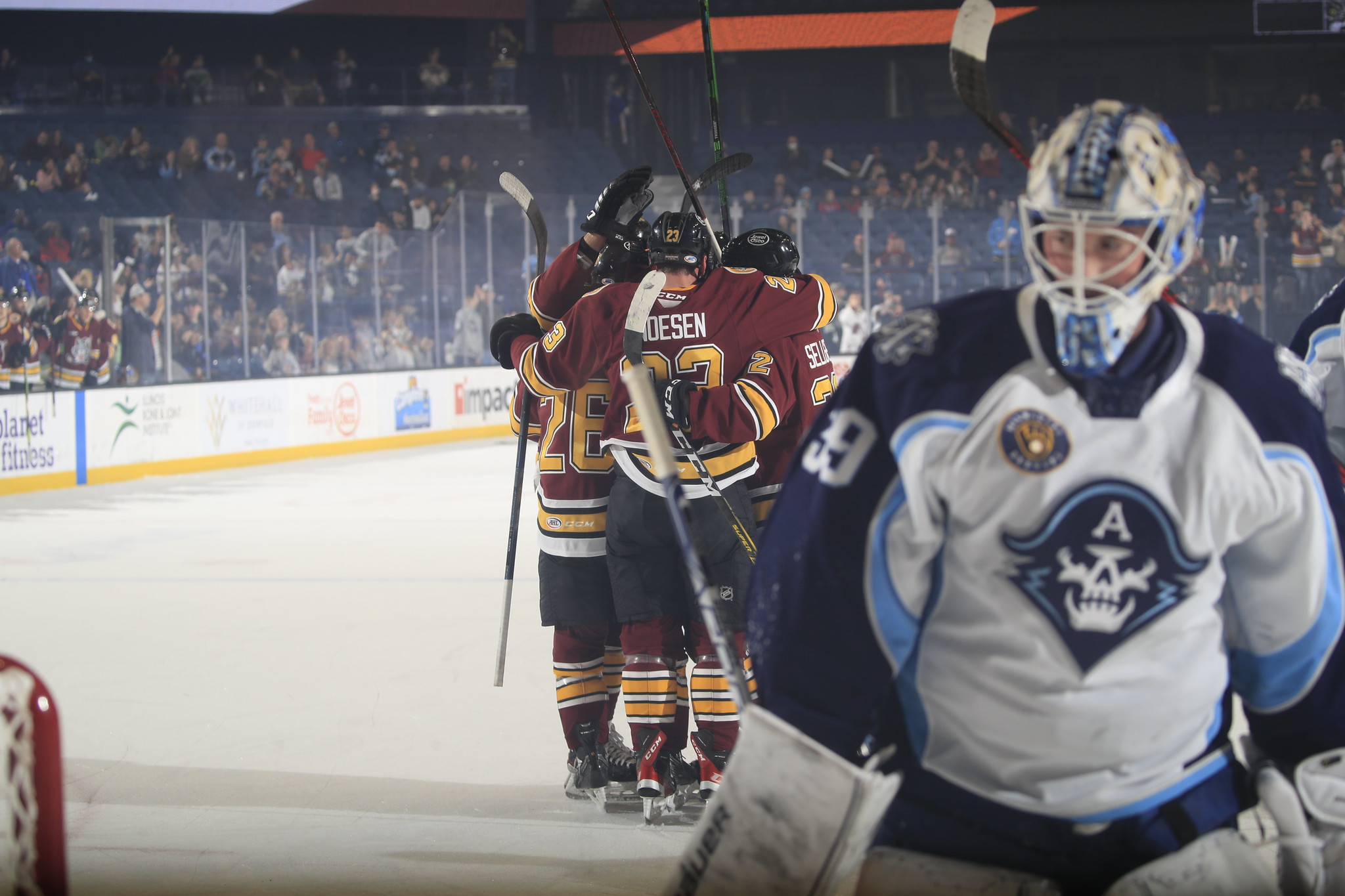 ROSEMONT, Ill. – It was a quick turnaround from Saturday night to Sunday afternoon – one AHL teams are quite used to dealing with during this point in the season. The Milwaukee Admirals were looking to build off a game 1 that was well played but not to their result, while the Chicago Wolves wanted to return to their pace of play and their identity as a team that had made them so successful this season.

Game 2 offered an opportunity either for the Admirals to tie the series heading back to Milwaukee or for Chicago to put them on the brink of elimination. If game 1 was any indicator, Sunday was to be filled with fireworks from both lineups. The goaltenders remained the same – Alex Lyon got his fifth consecutive start in the postseason for Chicago, while Connor Ingram returned to the Milwaukee crease after being pulled after two periods on Saturday.

Despite the anticipation for a heavyweight bout, this one turned into a laugher that Chicago took 8-2, giving the Wolves that 2-0 edge in the Central Division Final.

Keeping with its theme of quick starts in this series, it took Chicago all of four minutes to get on the board in this one. After a Jalen Chatfield got deflected at the slot, David Gust won a physical battle in front of the net, collected the puck on his backhand, and shoveled a shot past Ingram’s blocker for that coveted early lead.

“Despite the score being 6-2, we felt we kind of got away with one there.” Gust said of Game 1. “So today we thought we’d come out with a better start for a full 20 and lead that out through the rest of the game.”

Milwaukee, as they had in game 1, came out hard to play against in the first. They put bodies in front of Lyon and shot low through the traffic for deflections and rebounds. Crashing the net, their physical play would be rewarded on a Cody Glass rebound that was put home by Jimmy Huntington for his second goal of the series, tying this game at one 13:52 into the first.

The Wolves looked to be on their heels against Milwaukee’s physical attack and needed a wakeup in their lineup – and Gust would be the one to provide it again. Standing in front of Ingram’s crease, Gust got his stick on a Cavan Fitzgerald shot, deflecting it nicely past the Admirals’ netminder to restore the Wolves lead.

Two minutes later, Jamieson Rees created a turnover in the Admirals’ zone, working the space to the outside on his backhand. His pass from the corner hit captain Andrew Poturalski who made no mistake from the faceoff dot to extend the Wolves lead to 3-1.

“Honestly, our first was probably a bit better than yesterday.” Coach Ryan Warsofsky said of his team’s start. “Not as clean and concrete as we wanted it to be. You guys might think I’m crazy – I thought it was a closer game than the score looked. We got a couple bounces and put them in the back of the net.”

The buzzer blew for the first and both teams skated into the locker rooms with a bit of offense but a game still well in hand. That would change quickly over the next period.

With Chatfield sitting for a hold in the last minute of the first, Spencer Smallman high-sticked Glass off the opening faceoff in the second, resulting in 1:02 of a 5-on-3 advantage for Milwaukee. The Admirals get a couple of good looks from Rocco Grimaldi and Glass, but don’t maintain a lot of pressure on the Wolves’ penalty killers, who keep the Admirals out of the triangle and manage to kill both penalties of the two-man disadvantage.

“Huge.”  Warsofsky said about the big penalty kill. “Probably the big turning point in the game. They score there it’s 3-2, now we got a real game. Big kill that gave us some momentum to play five on five.”

A minute after returning to even strength, the Wolves went to work. CJ Smith took a pass in the neutral zone from Poturalski, working his way to the outside as he waited for help to join him. With patience and a perfectly threaded pass, he found Stefan Noesen charging the net for a tip past Ingram and a 4-1 lead.

At 7:33 of the period, it was Max Lajoie‘s turn to get into the action as he stepped down low into the slot during a lengthy zone possession, and he would clean up the rebound of a Josh Leivo shot off Ingram’s pad to make it 5-1 Chicago.

Just over two minutes later, with two Admirals and one Wolf in the box, Coach Warsofsky put four forwards on the ice and cashed in quickly on a Smith one-timer from Poturalski that blew this one wide open to 6-1. That one-timer marked the end of Ingram’s night, as for the second straight game, Devin Cooley came in to relieve his teammate in net.

But the Wolves weren’t done yet – a minute later Noesen put a net-front deflection past Cooley’s skate for another powerplay goal. In the last minute of the period, Smith took the puck away at the Admirals’ blue line and put it out front where Noesen cleaned up another one through traffic for his hat trick goal – one that received a delayed reaction from the crowd that must have simply lost track in the wave of offense the Wolves brought.

“It’s fun.” Gust said about the momentum on the bench. “It’s contagious when we got all four going and it’s fun on the bench when everyone’s hooting and hollering for one another.”

Mercifully for Milwaukee, the buzzer blew for the second period. Chicago was flying high with an 8-1 lead heading into intermission and simply had to walk this one home.

A minute into this one it was former Wolf Cole Smith gloving down a would-be exit out of the zone, skating it into the slot, and snapping the puck past Lyon for the Admirals’ second of the night. A couple of Milwaukee minor penalties gave the Wolves a look at a 5-on-3, but with the score as lopsided as it was the Wolves tried out different personnel that normally wouldn’t see powerplay time – namely noted tough guy Kyle Marino getting some good looks at the net.

With the game all wrapped up by this point, the most exciting bit of action came with about 2:20 left in the period, where Matt Donovan and Jesper Sellgren got into an altercation in the corner to Lyon’s right that brought everyone together. One by one, Admirals players from this point on started to get their game over with and head for the locker room, be it for their roughing, slashing, or unsportsmanlike situations leading to the referees giving them the gate. Six Admirals had their night end early, and eventually, the puck was allowed to drop and the clock to wind down on an 8-2 victory for the Wolves.