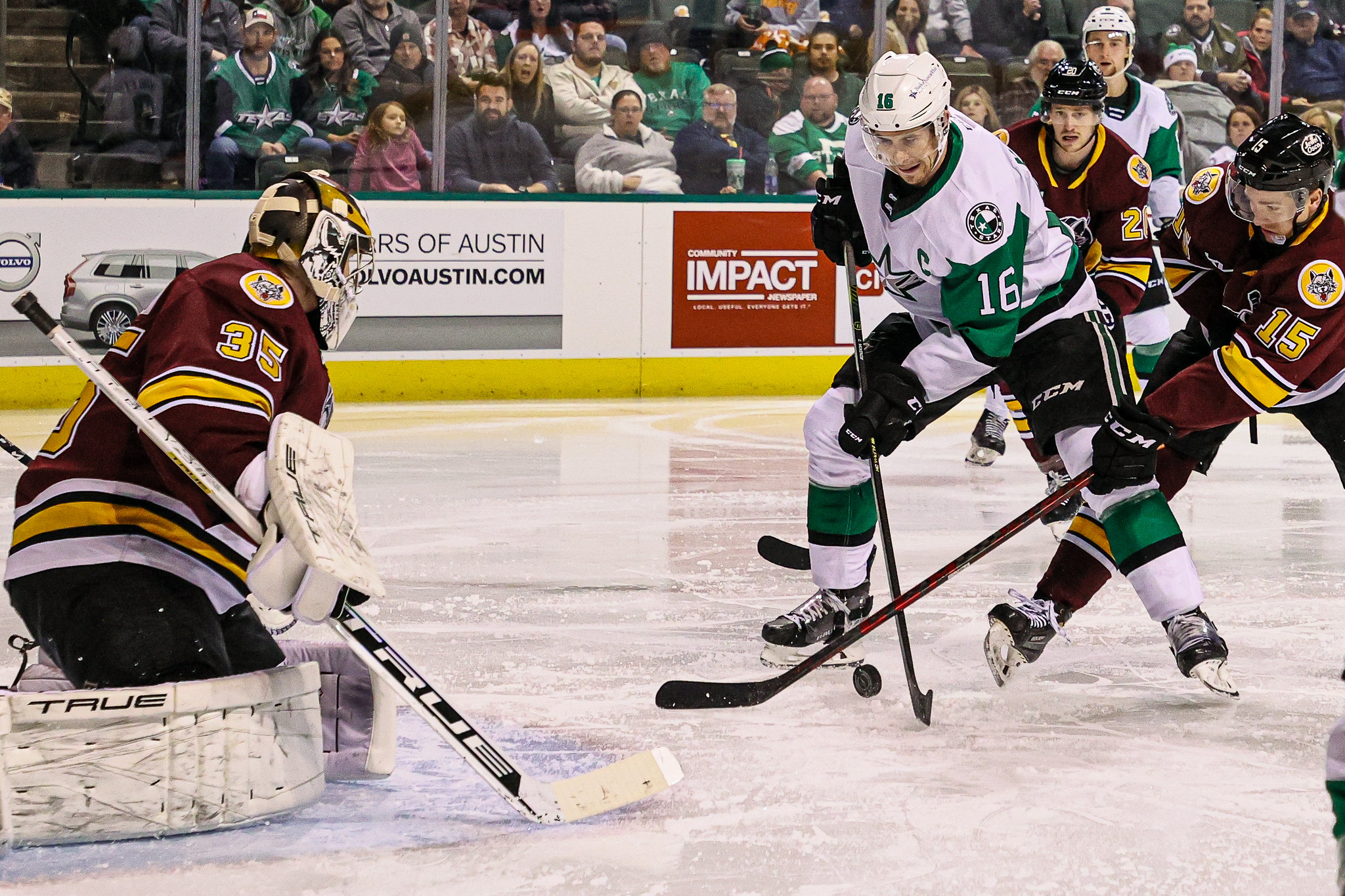 Despite jumping out to an early lead, the Stars were unable to extend their lead and later collapsed against the vaunted Chicago Wolves’ offense

CEDAR PARK, Texas – The Stars closed out their weekend series against the Chicago Wolves Sunday night with a 7-2 loss in front of their home crowd. Despite jumping out to an early lead, the Stars were unable to extend their lead and later collapsed against the vaunted juggernaut that is the Chicago Wolves’ offense. After getting swept in a three-game homestand, the Stars search for answers to their woes as they try to salvage their season.

The Stars looked to avoid being swept by the Central division-leading Wolves on Sunday and managed to jump out to a lead just 44 seconds in thanks to a Ben Gleason laserbeam. With the crowd roaring, the Stars continued to press deep into the period and controlled the pace of play while handling the speedy forwards of Chicago. Over the last couple of matchups between these two squads, the Wolves have been the beneficiaries of odd-man rushes and lackluster defensive coverage due to Stars defenseman jumping up into the play.

Sunday was more of the same, but the Stars were looking to stymie those opportunities with physical play along the boards and a more conservative approach offensively. In addition to the track meet style offense the Wolves employ, the Stars were also on the lookout for wraparound attempts, of which they had been burned a couple of times over the previous two meetings. The opportunities on the rush and behind the cage were there again on Sunday, but the Stars adjusted with quick goaltending and a defender being present at the far post on every attempt.

Despite these adjustments, the Wolves were able to level the score at one going into the first intermission thanks to a Jack Drury shot that squeaked through Adam Scheel’s arms. This was the third consecutive game in which the score was tied after 20 minutes of play. However, in contrast to the prior contests, the Stars would start the second period on the penalty kill with Josh Melnick being nabbed for hooking as time expired in the first period. The Stars PK had to be strong in the second period as they found themselves shorthanded on four separate occasions. The Stars held strong defensively through most of the second until Stefan Noesen broke the tie with a goal on a solo rush. AHL scoring leader Andrew Poturalski fed Noesen with an excellent seam pass through the two Stars defenders and continued to impress with his scoring against the Stars. In the waning minutes of the second period, Noesen extended the Wolves’ lead to two with his fourth goal in two nights. With a solid lead in hand, it felt as if the Stars had no life left in this game. As the final minute of the period approached, the Stars found themselves on the power play after Spencer Smallman was called for a high-stick. Just seconds later, Joey Keane was sent to the sin bin for hooking, but got more than he bargained for with a ten-minute misconduct after a conversation with the official. Poised to go into the final frame with a 5-on-3 power play for more than 90 seconds, the opportunity to cut into the lead was there.

The 5-on-3 power play fell flat and killed all momentum the Stars had hoped to build on. Contrary to the flow of the game, the Wolves struck quickly as C.J. Smith wired a beautiful pass to a streaking Josh Jacobs, who tapped it in from the backdoor. The Wolves continued to implement their style of game on the Stars and extended their lead when Jack Drury got his second of the game. Now 5-1 with about ten minutes left to play, fans began to exit the arena with no hope of a comeback. Just moments later, Riley Tufte, with an extraordinary effort play, made a diving pass from the boards to a net-crashing Rhett Gardner. Gardner was hooked on the breakaway and was awarded a penalty shot. Gardner roofed one off the backhand over Eetu Makiniemi to trim the lead to three. Any hope for a comeback was quickly shattered, however, as Poturalski tallied his 12th goal (34th point) of the season almost immediately after the Gardner goal. If you thought the Wolves were done scoring, you were sorely mistaken. Not 30 seconds later, Colton Point mishandled the puck in front of his own net and it wound up on the stick of Smallman who put the final nail in the coffin.

This is the first time this season the Stars did not split a homestand. After grabbing a win in each of their first four homestands, it feels like the team has taken a step back, or at least expectations have been tempered severely. Suffering a three-game sweep at home, against the division leaders may not sound as terrible on paper as it looked. With an 8-4 drubbing in the first matchup, the only way was up for the Stars. The effort in Saturday night’s overtime loss was much better and saw the team get a point in the standings. Going into Sunday’s contest, it felt like the Stars were going to put it all together and get a win against the red-hot Wolves. Early on, those ideas were seemingly confirmed with the Gleason goal. However, after the Gleason goal, the only offense of note was a penalty shot goal by Gardner 50+ minutes after the fact. Perhaps jumping out to the early lead was more of a moral victory, but the Stars have to cash in on their opportunities in the offensive zone when playing against teams with Calder Cup ambitions.

It appears playoffs may be a pipe dream at this point, but the Stars have plenty of time to right the ship. With eight games remaining in this extended homestand, the opportunity to reinsert themselves into the playoff picture is there. Though the question remains, does this team have what it takes to go on a run? Suppose we will all find out together as the Stars return to the H-E-B Center on Friday night to face off with the Rockford IceHogs, with whom they split their last series in November.