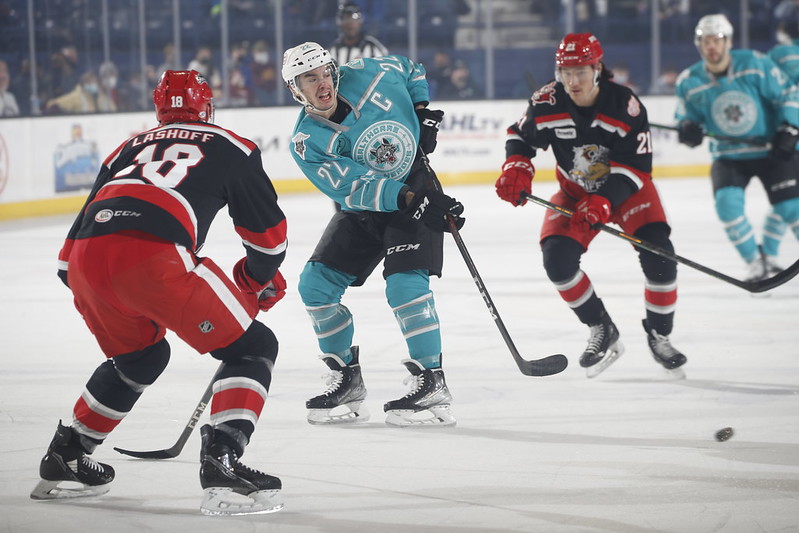 ROSEMONT, Ill. – Coming into Friday night’s matchup, both the Chicago Wolves and Grand Rapids Griffins were looking for a change of pace. Being two of the top three teams in the Central Division, it was quite odd to see both teams coming into the game on three-game losing streaks. Chicago limped home from a sweep in Manitoba only to drop an overtime decision to last-place Texas, while the Griffins lost four in a row at home and looked to flip the script back their way on the road.

Alex Lyon would get the start in net for Chicago, while Grand Rapids’ Victor Brattstrom took to the crease for the visitors with regular starter Calvin Pickard on assignment in Detroit.

Friday’s game also marked the return of Wolves center Ryan Suzuki, who had been out of the lineup since October 29th due to injury.

This game took on a unique look early as the Chicago Wolves skated out wearing their “Healthcare Hero” jerseys in a light blue contrasting with Grand Rapids’ visiting dark blues. The weekend was marked as a way for the Wolves to honor healthcare workers that have sacrificed so much during the COVID-19 pandemic, where the team gave free tickets to any interested workers and would wear the special jerseys for the homestand, and punctuated by an auction of game-worn jerseys to go to local charities sponsored by the Wolves.

Early in this game, the Griffins appeared to be quite in need of a similar kind of charity.

Following an opening minute breakaway chance by Turner Elson that Lyon handled, the Wolves kept the play almost exclusively in the Griffins’ end. They battled intensely, took control of loose pucks,  and moved the puck into high danger areas, forcing Brattstrom to make several huge saves early on. After several minutes of wearing down the Griffins defense, Maxim Letunov broke the deadlock with a wired shot on the rush off the bar and in.

Brattstrom received little in the way of help in the first – the only other Griffins opportunity came on another breakaway by Kyle Criscuolo that Lyon also denied. Beyond that, the Wolves outshot the visitors by a margin of 17-2, and it was only by the acrobatic play of Brattstrom that kept Grand Rapids within a reasonable deficit.

The Griffins could only hold to sustain a relentless Wolves attack for so long, and this period blew up in their faces by way of an all-too-familiar scenario when it comes to Grand Rapids: penalty killing. First, Criscuolo went off for closing his hand over the puck, allowing a chance for Stefan Noesen to stuff a feed from captain Andrew Poturalski in past Brattstrom. Letunov took a high stick the next shift, and Noesen went back to work, tipping home a Max Lajoie point shot to push the lead to 3-0.

Stefan Noesen tallies his 20th of the year, putting the @Chicago_Wolves up by 3 in #GRvsCHI. pic.twitter.com/ydvr3NrJg7

Tensions began to rise in the second – Griffins forward Dennis Yan pressed hard on the forecheck and ended up boarding Chicago’s Jack Drury. Incensed by the hit, Drury challenged Yan, and both players dropped the gloves and threw knuckles with one another. The energized Drury continued to exchange words with Yan beneath the roar of the crowd as the officials separated the two.

The Yan minor for boarding allowed Lajoie more powerplay time, and with regular PP quarterback Joey Keane on the shelf with an injury, Lajoie took his extra playing time to shine. A perfect feed from Poturalski hit Lajoie in the high slot, and he beat a screened Brattstrom for Chicago’s third powerplay goal of the period and a 4-0 lead.

By this point – Chicago had more goals (4) than Grand Rapids had shots on net (3). The end of the period was so bad for the Griffins that when they finally managed to get a puck on net late in the second, they received a jeering cheer from the approximately 5,523 in attendance at Allstate Arena.

With a 32-5 shot advantage heading into the final frame and a 4-0 lead, the Wolves expectedly left their foot off the gas ever so slightly. Grand Rapids ended up tripling their shot total, and Matt Berry was able to pounce on a loose rebound for his second goal of the season at the 6:13 mark, but it was an issue of much too little, much too late for the Griffins as they dropped their seventh straight game against the Wolves, losing every single matchup with the Central Division leaders so far this season.

The Wolves finish their weekend by playing host to their in-state rival Rockford on Saturday night at 7 CST, while the Griffins head north to visit the Milwaukee Admirals on Saturday night.