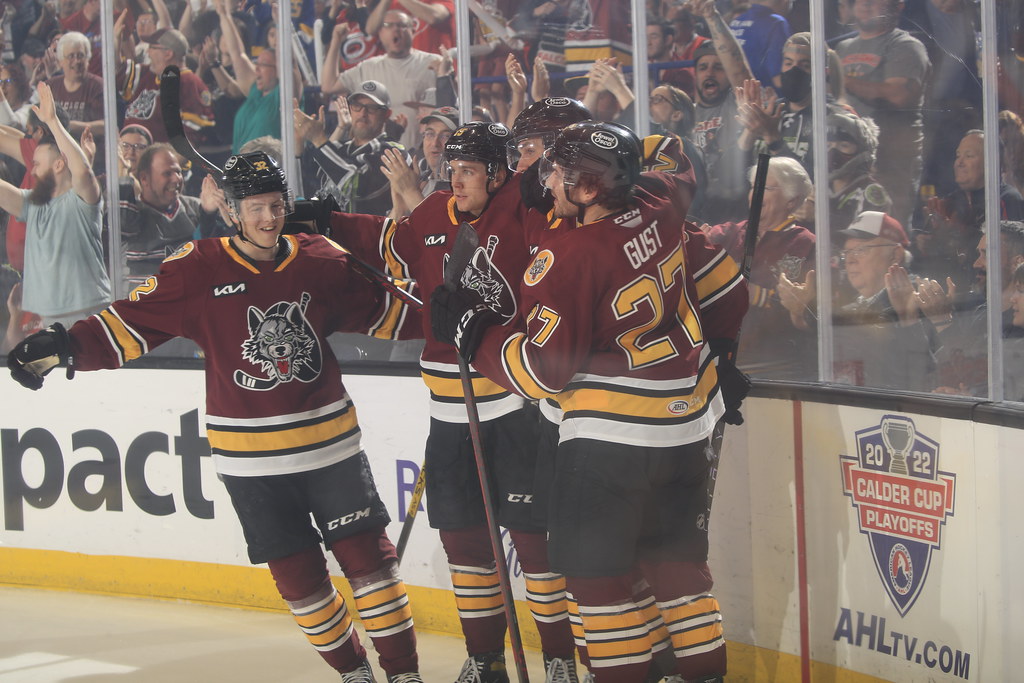 Chicago, Ill.-The Chicago Wolves offense proved to be too much for the Rockford IceHogs in Game 2 of their Central Division Semifinal Saturday night. The Wolves dominated possession in their 4-1 victory, taking a 2-0 series lead.

After a convincing 6-2 win in Game 1, it was more of the same for Chicago, who blitzed the IceHogs zone to the tune of 49 shots on goal. Rockford will attempt to stave off elimination in Game 3 at the BMO Harris Bank Center on Sunday.

The action resembled a twenty-minute power play for Chicago, who outshot Rockford 20-1 in the opening frame. Hogs goalie Arvid Soderblom kept the Wolves at bay until  the 16:52 mark. Josh Leivo’s initial attempt in the slot was thwarted by Soderblom’s right pad, but the rebound found Leivo’s stick and Chicago had a 1-0 advantage.

The Wolves quickly doubled the lead with a C.J. Smith tally less than two minutes later. Smith’s one-timer was set up by deft passing from Andrew Poturalski, to Josh Jacobs, and then to Smith.

Rockford fell behind 3-0 midway through the game after the Wolves won an offensive zone draw. Max Lajoie handled the puck, skated in a few strides and fired past Soderblom at 11:51 of the second period.

Rockford’s lone highlight came on a power play chance a few moments later. It was a breathtaking individual rush up the ice by Alec Regula that saw him split the defense at the Chicago blue line. The Hogs defenseman lifted the puck over the blocker of Wolves goalie Alex Lyon at the 13:19 mark.

The Hogs were unable to close the gap any further, as Chicago outshot them 18-5. Vasili Ponomarev sent a wide-angle shot toward the Rockford crease. The puck glanced off Hogs defenseman Jakub Galvas and into the cage to close out the scoring 13:54 into the third.