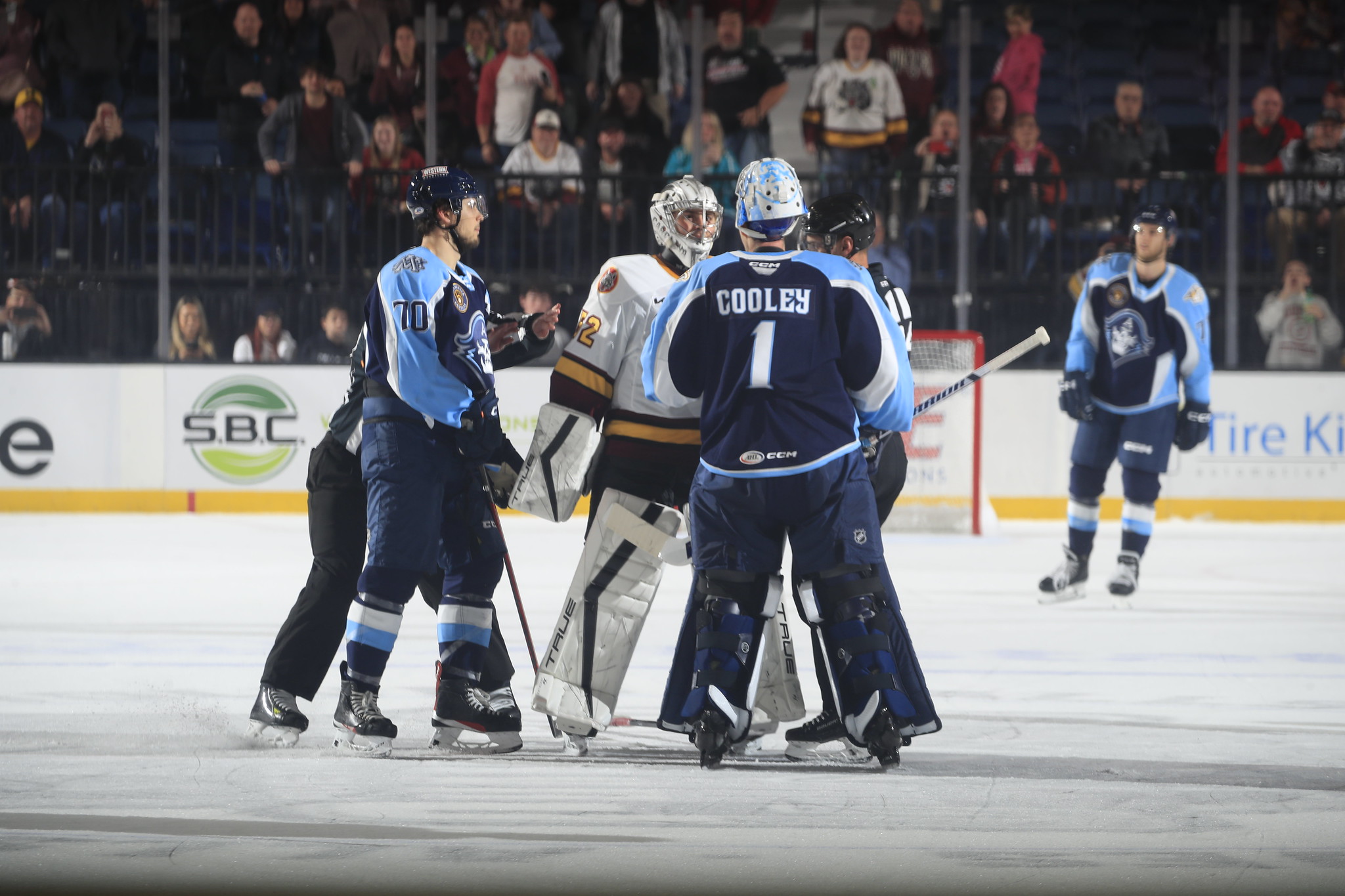 ROSEMONT, Ill. – Saturday night began with celebration, reminiscing, and of course fireworks in Allstate Arena. For one last time, the Chicago Wolves triumphantly brought out the Calder Cup. The players remaining from the 2021-22 team gathered around the cup and watched the banners for their championship season rise to the rafters. The absolute juggernaut of a team now forever living in immortality as the fifth championship in Chicago’s franchise history.

For those who got to witness it, including center Vasily Ponomarev, it was a special moment.

“My first big win with a team. It’s a new emotion. It’s incredible. I want to feel it again.”

It was special even for Head Coach Brock Sheahan, making his debut for the Wolves behind the bench.

“The atmosphere was amazing. It was obviously special for the staff and players who were here last year. To see them recognized and enjoy it, that was great. Obviously, you want a better result, but it is a starting point and we’ll get better from there.”

There was a larger occasion on Saturday night thought: there was a hockey game to be played. The accomplishments of last year would have to be put away in the trophy case and the Wolves would have to go back to work to getting back to the top of the mountain. The Milwaukee Admirals would love nothing more to see them at the bottom, and they did their part in trying to make it happen on Saturday night. When the dust finally settled, the Admirals spoiled the party with the final score of 5-2 and the 2022-23 season was fully underway.

Early on in this game, it was all Wolves. They moved the puck through the neutral zone, set up chances against Milwaukee netminder Devin Cooley and pounced on whichever unfortunate Admiral tried to hold on to the puck for too long. Ten minutes into the game and the Wolves outshot the Admirals by the count of 7-1 but weren’t able to beat Cooley.

The Admirals were more the opportunist in the first. After a tripping penalty on Jamieson Rees, the Milwaukee power play went to work. The puck found Mark Jankowski at the side of the net, who lifted the puck over Pyotr Kochetkov’s sprawling pad and into the open cage for the 1-0 Admirals lead.

Just over a minute later, Markus Nurmi went one-on-one with a Wolves defender that couldn’t close the gap and shot the puck that Kochetkov lost and just like that it was 2-0 in favor of the visitors.

Chicago wasn’t a team to give up so easily, and their skates really got moving in the second period. Chances piled up on the Admirals until Ponomarev came streaking down the zone and wired an absolute laser past Cooley to give the fans a reason finally to erupt with passion and cheers. After an impressive preseason with Carolina, Ponomarev is looking to take some big steps in his game this season.

Less than a minute later, Stelio Mattheos pounced on a loose puck in the slot and chipped it past Cooley for the equalizing goal with 13:07 to play in the second. An absolute flurry of chances follow – Ryan Dzingel had the puck with a wide open net following a pretty passing play but fired it over the gaping cage. Mattheos had another chance after a nice feed from Tuukka Tieksola and a move to beat the defender, but Cooley’s glove snagged the chance. Phil Tomasino had a chance on a breakaway for Milwaukee followed by chances from Ponomarev and Jack Drury as the action opened up and both teams traded big chances.

Coach Sheahan might not want so many of those chances coming back the other way going forward.

“I thought we had a decent start to the game. I liked our push back at the end of the first. In the second, I thought our tempo and our pace was higher. Our structure wasn’t great – I’d like to see us give up a little less. I thought we generated more, just didn’t get the results.”

Again, it was the Admirals that were opportunistic. With a minute left to go in the period, Tim Schaller got his stick on the puck in a scrum at Kochetkov’s crease that managed to squeak through the bodies and give Milwaukee the 3-2 lead just before intermission.

Chicago pressed in the Milwaukee zone in search of that elusive tying goal. Malte Stromwall had a couple of chances to show off his release from the high slot but Cooley had eyes on the puck the entire way and wasn’t getting beat. Despite the supportive energy coming from the Wolves faithful numbered 11,415 strong in Allstate Arena, the Wolves couldn’t break through.

That was, until with just over 5 minutes left Mattheos put the puck off Cooley’s pad with Mackenzie MacEachern driving to the net with a defender draped all over him. The puck bounced off MacEachern’s skate and into the net, with fans erupting in jubilation while the Milwaukee bench protested. The officials gathered at the scorer’s table for a lengthy discussion and review, and it was determined there was a kicking motion and the goal was waved off. As expected, there were 11,415 disapproving voices.

The decision hurt even more as, just a few minutes later, Tomasino set up Roland McKeown for a one time shot in the slot that beat Kochetkov and pushed Milwaukee’s lead to 4-2.

With time winding down, Kochetkov was called to the bench for the extra attacker, but the Wolves failed to get much set up against Cooley. Jimmy Huntington added an empty netter for a 5-2 final, but the game was far from over at this point. With just seconds left on the clock, Lane Pederson hammered an Admiral into the boards and began a scrum that had been missing all night from these two. Pederson had some words for the Milwaukee bench as he was escorted off the ice, and even after the final buzzer the fireworks hadn’t ended with more scrums at Kochetkov’s net.

With the Wolves’ goalie in the middle of it – as is expected at this point – Cooley skated out to center ice to meet him. While Kochetkov was more than willing to exchange words with his goaltending counterpart, cooler heads prevailed in getting both teams off the ice before the tempers boiled over.

“The plan is to win.” Sheahan said. “I think there’s only one way to do that: getting better every day, continue growing as a team, and adding pieces. That will be our goal day to day and hopefully we’re [raising the banner] next year.”

The Wolves are back in action on Friday, October 21st when they play host to the Manitoba Moose at Allstate Arena.