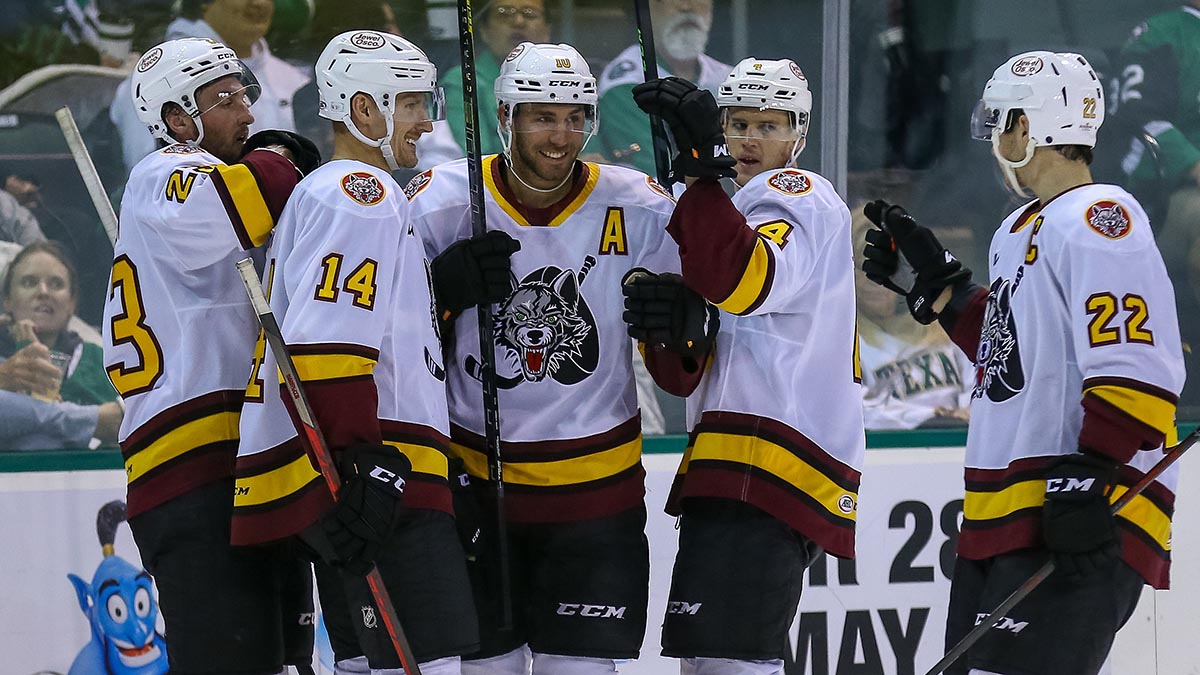 CEDAR PARK, Texas –  As the third game of the series between the Chicago Wolves and Texas Stars began on Saturday night in Cedar Park,  the Wolves needed only one point on Saturday night to clinch the Central Division and secure the first seed in their bracket. The Stars, meanwhile, had fallen behind the Iowa Wild for the final playoff spot in the Central and were desperate for points.

The Wolves were struck by the injury bug on Friday with young winger Noel Gunler and goaltender Alex Lyon having to leave the contest early. Forward Stefan Noesen also left that game late in the third with a concern for his hand but found himself in the lineup on Saturday night and ready to go.

Chicago ended the night as division champions by way of a 6-4 win.

The Texas Stars are a team that comes out fast, and for the third time in this three-game series struck with the opening marker. Ty Dellandrea found the rebound in the slot by himself and roofed a shot past Wolves rookie phenom Pyotr Kochetkov just four minutes in to put the Stars up early. The lead wouldn’t last for long – Joey Keane took the puck for Chicago down the boards and snuck in a tight angle shot through Adam Scheel for the tying goal just a minute later.

The goals continued to come fast and furious in this first – just two minutes later veteran Richard Panik scored his first goal for the Wolves with a power move to the front of the net and tenacity to jam it home past Scheel.

The teams would continue to trade high volumes of chances, and after a Josh Leivo roughing penalty it took all of seven seconds of power-play time for Anthony Louis to streak down the wing and fire a shot from the faceoff dot that beat Kochetkov and tied the game once again.

The shots finished 19-13 after the dust settled on a fast and furious opening frame.

Again – the Stars came flying out of the gate and it was Louis again. After the Wolves failed to clear, Louis was alone at the side of the net to clean up the rebound chance and put the Stars ahead 3-2. The pace in the second slowed somewhat, as seven minor penalties were called between both teams with the referees trying to hold together two teams desperate for the points. As has been typical with this back and forth game, the Wolves responded from Leivo on the power play at 10:14 to tie it up again.

Texas had its own response from Jerad Rosburg at 17:41 to put themselves ahead 4-3 at the end of the second, but consecutive penalties from Riley Damiani and Ben Gleason would give the Wolves a full two-minute 5-on-3 powerplay that would carry over into the final frame.

The Wolves, however, failed to cash in on 1:15 of that carry over two-man advantage, with a roar of cheers coming from the Stars faithful in response to the effort of their penalty killers. The Wolves kept the Stars hemmed in their own zone early on, and it was the effort of Max Lajoie to dive in and lift the puck past Scheel for the tying goal. Just a few minutes later, Kyle Marino was called for boarding to put the Stars on the power play. While Texas was trying to get set up, it was Noesen knocking the puck away from Ryan Shea at the blue line and streaking in alone on Scheel shorthanded. Noesen, the leading goal scorer in the AHL, beat the goaltender with a shot off the post and in to give the Wolves the 5-4 lead, and had some words for the Stars bench in the celebration afterwards.

The Wolves would clamp down in the third period, refusing to give the puck up to the Stars for a chance to tie the game. While putting ten shots of their own on net in the final frame, the Wolves only conceded three on Kochetkov.

Noesen would add an empty netter – his 43rd goal of the season – to cap off a three-goal third period and a 6-4 win for the Wolves. The win pushes Chicago’s win percentage beyond the maximum possible percentage for the Manitoba Moose, clinching the Central Division and the first seed in the divisional bracket for the Wolves.

Kochetkov stopped 25 shots for his 13th win in 15 games, while Scheel finished with 30 saves in the effort. Wolves captain Andrew Poturalski had three assists on the night to come within one point of the AHL scoring lead.

The Wolves host Rockford on Tuesday night before travelling to Grand Rapids on Friday. Chicago hosts Milwaukee and Grand Rapids that weekend to round out the last 3-in-3 of the season.