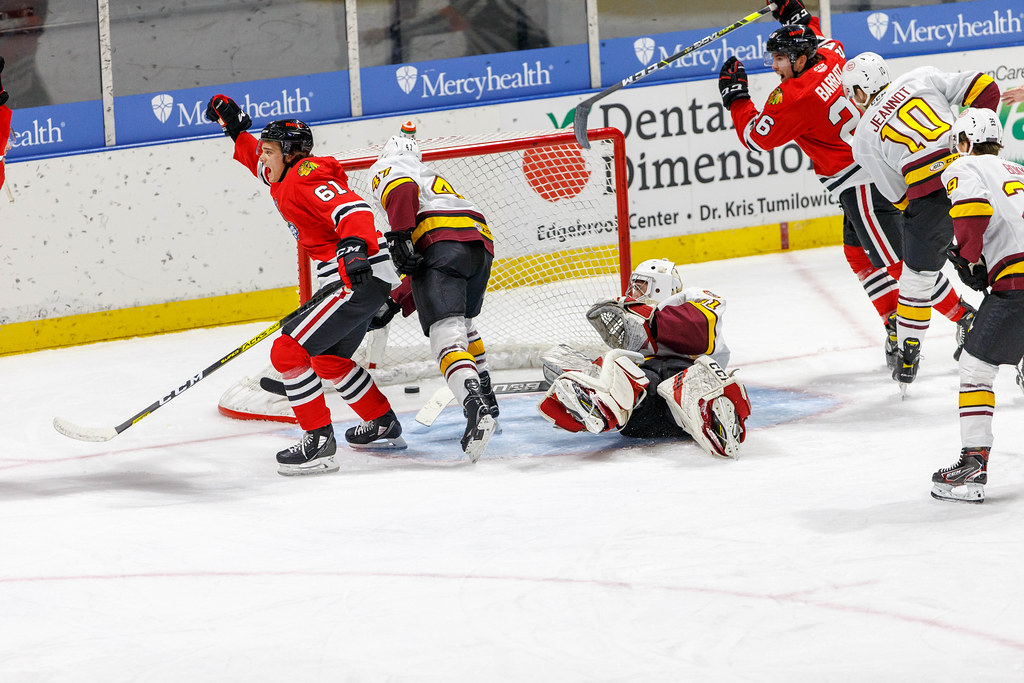 Rockford, Ill. – The Rockford IceHogs got off to a fast start in their season opener. They just couldn’t keep a talented Chicago Wolves out of the net.

The Hogs raced out to an early 2-0 lead, only to see Chicago rally from behind twice as the Wolves took over to win, 5-4. A pair of goals from Wolves rookie Seth Jarvis proved to be the difference in this high-scoring affair.

The Hogs were 2-2 on the power play in the first half of the opening period. With Lukas Craggs in the box for holding, John Quenneville took a pass from Wyatt Kalynuk into neutral ice. A give and go with Cody Franson allowed Quenneville to streak into the Wolves zone. He beat Chicago goalie Jeremy Helvig from the slot at 4:41 for a 1-0 Rockford advantage.

A few minutes later, Joey Keane was sent to time out for holding the stick. The IceHogs won the resulting offensive zone draw and maneuvered the puck to a pinching Franson. The veteran defensman found Evan Barratt in front of the Chicago crease. Helvig stopped the attempt, but Chad Yetman‘s put back gave Rockford a 2-0 lead at the 8:35 mark.

The Wolves rallied in the latter half of the first period. Jarvis potted his second goal of the season, cleaning up a rebound of Jamieson Rees power move to the Hogs net at 17:22 of the first. Just over a minute later, Cavan Fitzgerald sent a snipe from the top of the left circle. The shot beat Hogs goalie Matt Tomkins, clanged off the left post and settled into the net to tie the contest at two goals with 1:36 remaining in the fist period.

Rockford went up early in the second when Franson set up Kalynuk for a one-timer from the right dot on the man advantage 4:36 into the middle frame. The Wolves responded with three unanswered goals.

Coming off a faceoff win in the Hogs zone, Alexandre Carrier sent a shot wide of the net. However, the carom off the end boards wound up on the stick of Tanner Jeannot, who tied the game 3-3 at the 5:11 mark. Another strong move to the net by Rees got him past the defending Chad Krys. Jarvis was on hand to finish the play and put the Wolves up 4-3 at 8:10 of the second.

Rem Pitlick got in the way of a Quenneville pass attempt to set up a breakaway chance. Pitlick sent a shot over the blocker of Tomkins for a 5-3 Chicago lead at the 14:35 mark. The IceHogs found themselves down a pair at the second intermission.

Rockford cut the Wolves lead to 5-4 on an even-strength goal by Matej Chalupa, who gathered in a nice backhand pass from behind the net by D.J. Busdeker and snuck a shot past Helvig. Dylan McLaughlin was credited with the secondary assist and also helped out with a screen of Helvig on the goal, which came at 9:27 of the final frame.

The equalizer would not materialize before the final horn. Yetman had an open look from the left post on a late Rockford power play. However, his put back attempt of Barratt’s shot was just off the mark. Despite pulling Tomkins for a two-man advantage, Chicago held firm and time ran out on the Hogs.