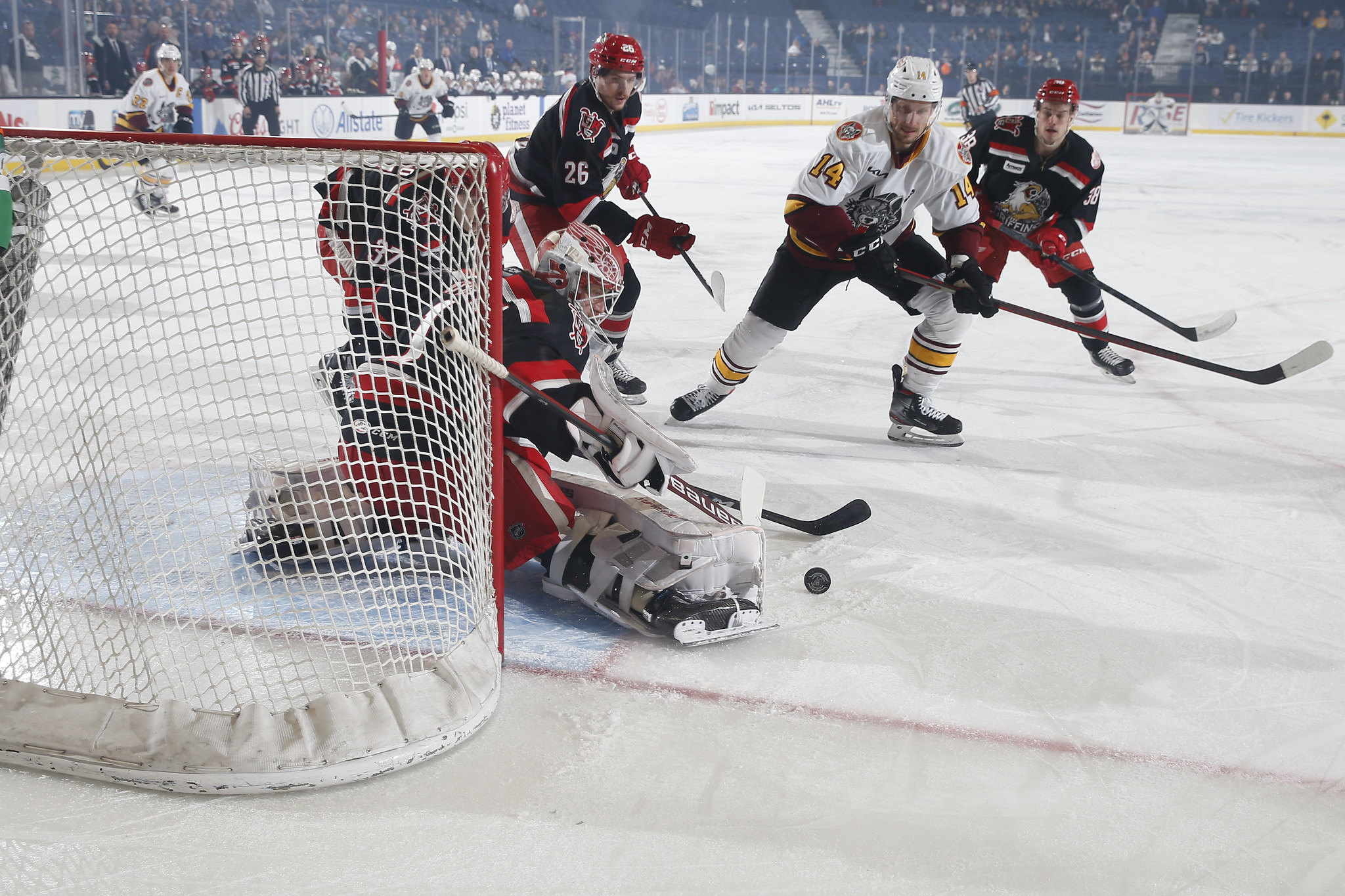 ROSEMONT, Ill. – Going into Thursday night’s game, the Chicago Wolves were probably the last team that the Grand Rapids Griffins wanted to see in a season they would like to forget. After all, the Wolves sported a 10-0-1 record over the Griffins this season, including two wins this past week that mathematically eliminated Grand Rapids from postseason contention this season.

Even with the Central Division clinched for some time now, the Wolves still had implications in the results, with the number one overall seed in the AHL playoffs still on the line in the waning days of the regular season. The Griffins, meanwhile, were playing solely for pride at this point of the year.

Despite the discrepancy in the standings and in the final score, this game played much closer than initially anticipated. Still, the story remained the same, with the Wolves coming out in the end to a 6-3 final.

Chicago wasted no time getting out to an early lead in this one. Just 1:37 into the game, Josh Leivo fed a cross-ice pass over to Jack Drury, who fired a quick wrist shot past Griffins goaltender Victor Brattstrom to put the home team ahead. The goal marked Drury’s 50th point of his rookie season, becoming the third Wolves rookie to reach that mark.

The Wolves kept up the pressure, maintaining puck possession in Grand Rapids’ zone and peppering Brattstrom. Early on, the ice tilted in their favor, and the game felt like it could quickly become a runaway decision in favor of the Wolves. Brattstrom continued to make big saves, and as the game opened up, a set play off a faceoff allowed Jonatan Berggren to find Riley Barber on the doorstep, deflecting a back door pass to tie the game. The tying goal continued an impressive point streak for both Griffins forwards, with Barber recording a point in 16 straight games, while Berggren’s assist marked his tenth straight with a point.

With Tyler Spezia sitting for a cross-checking minor, the Wolves went to work on the powerplay. However, it was the Griffins that ended up striking. On a shorthanded rush, Dominik Shine chipped the puck to himself and beat Jack LaFontaine through the five-hole to put Grand Rapids up 2-1. Just like that, the Wolves’ hot start to the period seemed like a distant memory as they went to the break trailing.

A shorty from shine?

Yeah we love that😎 pic.twitter.com/mItNcxfJw9

Pushing the intensity, Chicago came out to start the middle frame with intent. Again, they played with pace, possessed and moved the puck, and battled to retrieve it and pressure the Griffins’ defense constantly – and again, Brattstrom was up to the task. The Griffins netminder made several key saves, namely a rush chance from Drury that would have made highlights across the league if not for the toe of Brattstrom’s skate.

However, the wall could only hold for so long, and with less than five minutes in the period, David Cotton swatted at the rebound of a Jalen Chatfield shot into the net to tie the game up at two apiece. That would be the only impact of the middle frame, but the Wolves had the momentum clearly in their hands heading into the final period.

Just over four minutes into this one, the Wolves’ top line went to work – captain Andrew Poturalski took a pass from Stefan Noesen behind the net and beat Brattstrom with a top-shelf shot to put the Wolves ahead 3-2. Both players were named to the AHL First All-Star Team just before puck drop, and their presence on that goal showed precisely why they were named to the honor.

Chicago wasn’t done – halfway into the period, Chatfield took the puck wide along the boards and found Drury again in the middle of the ice for him to one time it past Brattstrom for his second of the night and the 4-2 lead. Grand Rapids, however, wasn’t going to go away quietly. After LaFontaine couldn’t handle a shot from Butrus Ghafari, it was Samuel Dove-McFalls on the rebound cleaning up the play to bring the Griffins within one on Dove-McFalls’ first AHL goal.

For the Griffins, as has been their M.O. all season, it was too little too late. Leivo added an empty-net goal, and Noesen added an insurance goal in the dying seconds to pad the stats and polish the game off with a 6-3 final over their Central Division foes. The Wolves finish the season series with an absurd 11-0-1 record over the Griffins.

LaFontaine finished with 22 saves for his 4th win of the year, while Brattstrom stopped 31 shots in a losing effort.

Both teams finish off their regular seasons on the road on Saturday – the Wolves travel to Rockford to take on the IceHogs while the Griffins make one last stop in Cleveland for a date with the Monsters.